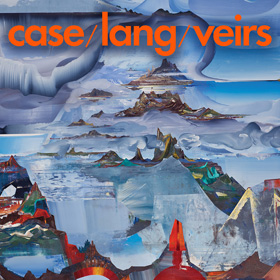 While Neko Case has compiled a remarkable catalogue of solo work, she also plays well with others. Back in the late ’90s she recorded as half of the Corn Sisters along with Carolyn Mark, and she’s continued to appear on albums by her old friends the New Pornographers. Even though Case’s massive charisma tends to overshadow anyone else within range, case/lang/veirs feels like a true collaboration, co-starring k.d. lang, a venerated elder who built on alt-country roots to become a versatile and dependably great vocalist (including a duet album with Tony Bennett), and Laura Veirs, a solid if more conventional folk-inclined artist (whose spouse, Tucker Martine, produced this charming set). Each woman has moments in the spotlight that will please their fans, but this quietly amazing collective has its own identity, making luminous, warm-hearted pop seemingly plucked from the ether and belonging to no particular time or place. Almost any track could be cited as a highlight, and one of the best is “Song for Judee,” a heartrending ode to the ill-fated LA singer-songwriter Judee Sill.