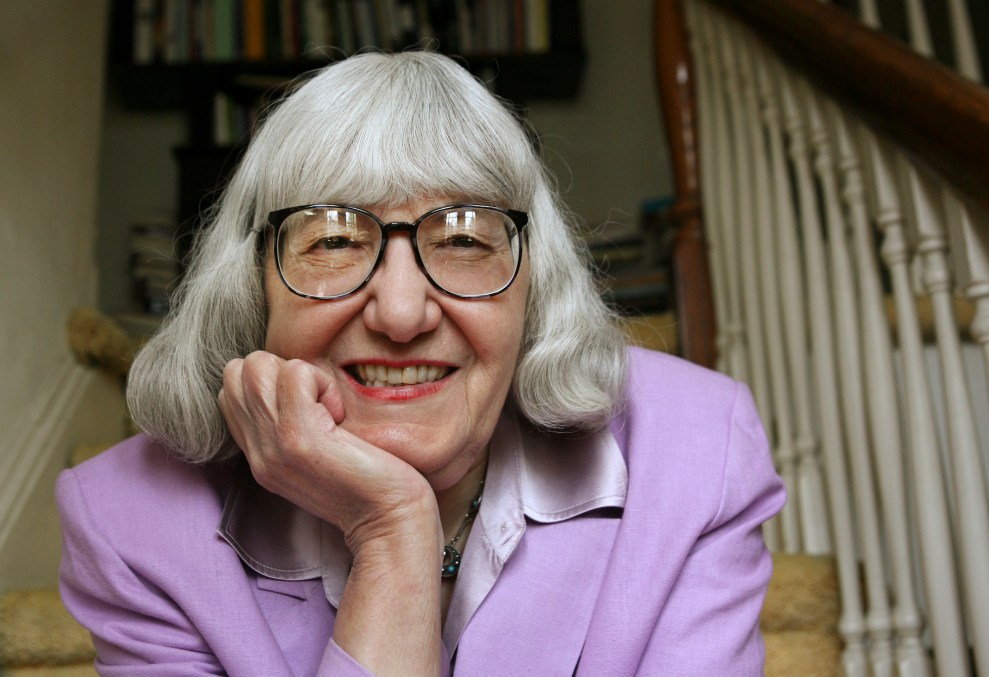 Mention Cynthia Ozick to a group of friends and you’ll likely get a sprawling array of responses. For some, she’s an icon—this camp included the late David Foster Wallace, who famously asserted that she, Cormac McCarthy, and Don DeLillo were America’s premier living fiction writers. Others might give you a blank look. Irrespective of her place in the American canon, Ozick has a distinctive and notable voice. Including her 1966 debut novel, Trust, the lifetime New Yorker has put out 18 books that include poetry, fiction, and criticism, and grapple with capital “t” Themes—Jewish identity, the divine, art’s role in our culture—packaged in some of the most arresting and unforgettable sentences of the past half-century.

Her latest work, Critics, Monsters, Fanatics, and Other Literary Essays, is a powerful collection that laments the downward spiral of the once-exalted literary form. I caught up by email with the 88-year-old Ozick, who still lets no one off easy.

Mother Jones: Does one type of writing hold your heart above all others?

Cynthia Ozick: Yes. The type that I can no longer do. In my 20s and early 30s I was driven to write poetry. In 1992, Epodes, a boxed collection, was published by the Logan Elm Press and Paper Mill, a part of Ohio State University Press, and illustrated by Sidney Chafetz. The paper was hand-milled. My introduction spoke of “the bruises and thwartings and insatiable wantings of the young woman who once wrote [these poems] in the fever of her desire.” The boxes were crafted by a local dentist. But nowadays, between stories and essays, it is story that claims the fever of my desire.

“Every writer aspires to recognition, and it comes entirely privately…each time a piece of work is judged worthy of publication.”

MJ: After your first novel, it seems as though you gained increased recognition steadily—maybe it felt more like “slowly”—over the years. How might this delayed success have contoured your relationship to acclaim and positive feedback, now that you have 18 books to your name?

CO: How can these words—”recognition,” “positive feedback,” and especially “acclaim” and “success”—stand beside what I’ve so often encountered, which is the seriously diminishing “I never heard of her before”? Certainly your coming into view at this moment counts as highly welcome “positive feedback,” but how many decades have passed in the absence of print interviews such as this one? I offer this not as whine or grievance, which I would furiously deplore, but as simple fact. As for “acclaim” and “success,” they rightly characterize writers with abundant and active international readerships—Alice Munro, for instance, honored by her Nobel, and Philip Roth, long a significant household name. But recognition is something else. Every writer aspires to it, and it comes entirely privately, without public fanfare, each time a piece of work is judged worthy of publication.

Eighteen books? Slim pickin’s. There ought to have been more. Seven years dedicated to the ephemera of theater? Even with the privilege of Sidney Lumet as director? Admittedly an exciting interval. But finally: Ah, waste.

MJ: Back in 1999, David Foster Wallace called you one of the nation’s foremost living writers of fiction. What did that feel like?

CO: I learned of it about a year ago, having stumbled on a photocopy (on the internet) of the flyleaf of, I think, The Puttermesser Papers, on which Wallace had listed a long column of words, apparently new to him, culled from its pages. I was stunned and touched and puzzled. (How could this be?) It put me in mind of similar studious vocabulary lists in Kafka’s notebooks when he was learning Hebrew: Hebrew words laboriously translated into German.

MJ: My impression is that you are disenchanted with the current state of fiction. Can you speak to that? What has gone wrong? Is it a reflection on the literary project itself, the writers, the readers? Who bears the blame?

“Is it possible that those fellow academics who pretend to have understood Judith Butler are lying sycophants?”

CO: I can’t claim to be disenchanted “with the current state of fiction” because I read so little of it. My reading is mostly drawn to history—I’ve just finished East West Street, by Phillipe Sands, a study of the origin of the term “genocide” and its influence since—and older novels and stories. Recently I’ve been immersed in the brilliantly rich work of W.D. Howells, and wondered at his neglect, and his dismissal as a minor writer. What’s impossible not to notice, though—it’s all around us—is the diminution of American prose: How pedestrian it has become. Pick up any short story and listen to its voice, the tedious easy vernacular that mistakes transcription for realism. This would display an understandable pragmatism if it were a pandering to common-denominator readers; but it is, in fact, a kind of hifalultin literary ideology, the less-is-more Hemingway legacy put through an up-to-the-minute industrial blender. Also, if ideas are what feed serious literature and arresting language, who today is writing a novel of ideas (which can often mean comedy)? I think of Joshua Cohen. Who else?

MJ: What do you think of literature’s place between the poles of the academy and the reading public? Do you intend to identify with one group over the other?

CO: Much of the academy on the humanities side, English departments in particular, no longer write what can pass for normal English. Judith Butler, for example, has been awarded first prize in the celebrated Bad Writing Contest for a sentence so clotted with incomprehensible barbarisms that it might be taken for the ravings of a fake preacher speaking in tongues. Is it possible that those fellow academics who pretend to have understood her are lying sycophants?

MJ: In the Amazon era, everyone is equally capable of rating a book by clicking between 1 and 5 stars, and books that have the largest median fan base become the most celebrated. Do you think this has changed literature and criticism? Or has it discouraged writers from big, creative risk taking?

CO: Always respecting the exceptions among them, one notes that too many of these consumer reviewers misunderstand the inmost nature of what literature means. It does not mean “liking.” Novels are routinely denigrated when characters are not found to be likable. Is Raskolnikov likable? Is King Lear? The plethora of such naive readers testifies to a failure of imagination—the capacity to see into unfamiliar lives, motives, feelings—and this failure must, at least in part, be the failure of the teaching of literature in the schools. Writers who witness these lame “reviews” may sigh, but no seriously aspiring writer will be discouraged. Somewhere there lives the ideal reader.

MJ: Do you think the infusion of technology writ large has contributed to the fading star of literature and imagination? As in, do you think there has been a value shift from the high-minded literary intellectualism of decades past toward mere entertainment?

“The wonder is that so many young writers continue to believe in the venerable print novel as the corridor to fame and fortune.”

CO: Advances in technology neither impede nor augment literature. Would Shakespeare on a computer keyboard surpass his quill’s eloquence? Both Milton and George Eliot were obliged to dip their pens repeatedly, frequently several times within the same sentence. It isn’t the instrument that influences High-Minded or Low-Minded; it’s the quality of Mind itself.

MJ: Do you think potential young writers are being shepherded into the creation of digital products and tech startups because they’re being told that that is the new avenue of creation expression?

CO: I have no answer for this. It’s true that the young who now flock to script writing, or producing and directing, to fulfill the demands of these new devices would, in an earlier period, have been submitting to magazines and working on their first novels. But even in the midst of all these “digital products,” the wonder of it is that there are still so many young writers who continue to believe in the venerable print novel as the corridor to fame and fortune.

MJ: What do you think of reality TV?

MJ: With young writers especially, there’s a fierce sense of disavowal of one’s previous self; something written a year prior feels as if it came from an entirely different person, often one whose work is excruciating even to consider. At your age, do you feel any sense of alienation from your previous selves?

CO: In certain pragmatic choices as a writer, yes, I look back on them as mistakes and wish I had done things differently. I wish I had gone into the Great World to pursue literary journalism, rather than hole up for too many years with an overly ambitious never-to-be-finished novel. I wish I hadn’t been faint-heartedly loyal for more than four decades to an agent whose professionalism was wanting. But all this is external to the writing itself. What I felt then I feel now: the inexorable, unchanging interior hum of doubt and hope.