The controversy over a recent Daily Show tweet and the departure of one of the show’s rising comics has put a spotlight on how few women have roles on screen and behind the camera at television’s top late-night comedy shows.

And when Mother Jones did spot-check of several programs’ credits, the numbers read like a terrible punchline that female comics know all too well. While Full Frontal‘s Samantha Bee and past late-night hosts such as Chelsea Handler have helped blaze the path for women, the people penning the jokes for the most popular shows are still overwhelmingly male.

At eleven of television’s most popular late-night programs, just 30 of 175 writers were women, according to credits for episodes that aired this year. In other words, less than 18 percent of late-night comedy writers at the most popular sketch and talk shows are women. That is significantly lower than the number of female television writers overall, according to a study published earlier this year by the Media, Diversity, & Social Change Initiative at the USC Annenberg School for Communication and Journalism: In broadcast TV, women make up 31.6 percent of writers, compared with 28.5 percent in cable and 25.2 percent for shows that are streamed over the internet. Film still trails dismally behind—only 10.8 percent of writers are female. Though female writers find more work in television than their counterparts in film, the gender imbalance in comedy programming has continued to lag. 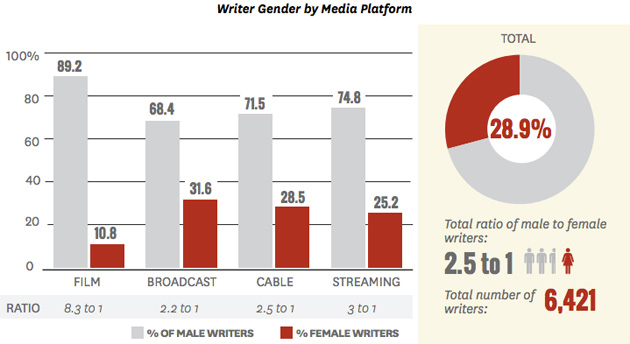 This issue came up again after Monday’s historic US Supreme Court decision, which struck down several restrictive abortion measures in Texas. People took to social media to express relief about the ruling, which will prevent the state’s remaining abortion clinics from shutting down. It came as a surprise to some fans when The Daily Show With Trevor Noah posted what some said was a rather tone-deaf tweet.

The tweet, meant to show support for the ruling, did not land well with Twitter users on both sides of the abortion debate. One even suggested The Daily Show could avoid snafus like this by hiring more female writers. The Daily Show did not issue an apology, but it did post a follow-up tweet for clarification:

That Twitter user who clamored for more women writers raises a good point. Although The Daily Show is known for left-leaning jokes and its snarky take on American politics, the backlash to this tweet is an example of what can happen when a group of mostly male writers try to make a joke about women’s issues without much female input. Now, even fewer women will be on the show’s payroll. On Wednesday, Daily Show darling and four-year correspondent Jessica Williams announced she would be leaving the show after this week to begin work on a pilot. Williams, the youngest correspondent to join the show, inked a development deal with Comedy Central in March.

There are currently eight regular correspondents on the program, and after Williams’ departure, there will only be one female correspondent on a team of seven. The female correspondents are not credited as writing staff. Nor are the three women who are listed as semi-regular contributors on the Daily Show’s website. That means the ratio of male to female writers at The Daily Show is not any better than it is for similar programs: There are five times as many men as there are women in The Daily Show‘s writers’ room.

We took a look at the closing credits of the recent episodes of the most popular late-night shows. To get the most accurate count possible, we looked at the credits of each show or the Writers Guild of America website to verify the names of every writer. We used Twitter and IMDB to verify the gender of each writer.

The Daily Show With Trevor Noah, as of June 2016: (Comedy Central)

The Nightly Show With Larry Wilmore, as of June 2016 (Comedy Central)

Last Week Tonight With John Oliver, as of June 2016 (HBO)

The Late Show With Stephen Colbert, as of June 2016 (CBS)

*Recent episode credits were unavailable for Conan, The Tonight Show, and Jimmy Kimmel Live. The following numbers are from the 2016 Writers Guild Awards nominations.

The Tonight Show Starring Jimmy Fallon, as of December 2015 (NBC)