On a Tuesday in November, a few hours after the president-elect of the United States tweeted a string of insults at journalists and suggested that Americans exercising their free-speech rights should be stripped of their citizenship, the New York Times published a terrifying story.

Researchers, it said, were finding the “warning signs flashing red” when it comes to the vitality of democracies across the world. From Europe to New Zealand  to the United States, the number of people who say it is important to live in a democracy has plummeted, while the number of Americans who think it would be okay for the military to seize power has skyrocketed.

This is not the kind of conversation most of us expected to have in our lifetimes. Global nuclear war and catastrophic climate change—those might be serious concerns. But the citizens of the world’s democracies deliberately tossing out their freedoms, after decades of cheering freedom seekers from Tiananmen to Tahrir? That, honestly, was not on the radar.

And yet here we are. It turns out that the numbers underlying the Times article may not have been as scary as they originally seemed—but they remain scary enough. For a growing number of people, democracy is failing to make the case that it can produce better governance and a better life. Here in the United States, trust that the federal government can be trusted to do the right thing all or most of the time has gone from more than 50 percent in 2001 to below 20 percent in 2015. Part of that decline is rooted in Republicans’ decision to tie Washington up in gridlock—but it goes deeper than that. One of the factors, and the one that hits closest to home for us journalists, is the performance of the press.

Until not terribly long ago, there were a few basic rules for success in the news business. One was that publishing verifiably false information would drive audiences away. If you made stuff up, people would cancel your paper or stop watching your network. Media companies practiced basic quality assurance not because they were deeply ethical, but because their bottom line depended on it.

But for platforms like Facebook, the key is not the credibility of the news we see, since they don’t produce it. Their success depends on getting us to engage, share, and stick around, which means making sure that there’s plenty in our feeds to warm our heart or get us outraged—whether that’s a deeply reported exposé or a cruel hoax is a second-order concern.

That’s how we ended up with a 28-year-old from North Carolina walking into a pizza restaurant in Washington, DC, with a rifle, aiming to “self-investigate” the stories he’d seen about Hillary Clinton abusing children. The accounts seemed convincing, and there were lots of them in your basic Google search. Powerful people—like the son of the soon-to-be national security adviser—were sharing them. Plus it all went back to those secret emails everyone was talking about. If you already believed Clinton was capable of anything, how would you conclude that this horror story was beyond the pale? 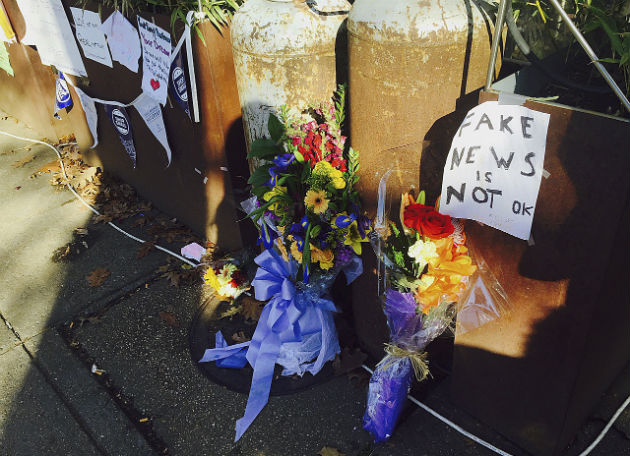 Edgar Maddison Welch’s moment in the spotlight was not just about a guy, perhaps disturbed or vulnerable, falling victim to an avalanche of fake news. It was about a side effect of the dissolution of the old order of media: the way we’ve come unmoored from a shared set of core facts.

In their heyday, legacy media left out a lot, mischaracterized a lot, allowed themselves to be taken for a ride (all the way to war). But every day, newspapers and television networks also told us a few things about our politics that had gone through basic vetting—and it was understood that they had. “If it’s on the news, it must be true” felt naïve, even foolish at the time, but now we know it represented a social contract far more fragile than we realized. We had an agreement, among a wide swath of society, that news media constituted an acceptable mechanism for sorting fact from fiction.

This year, that agreement finally collapsed.

Journalists were the last to figure this out. To the bitter end, they clung to the assumption that, so long as it was gently pointed out that, say, the Republican presidential nominee had “no evidence” for calling immigrants rapists, Americans would know what the facts were.

What Trump realized, though, was that we’ve gone from “if it’s on the news, it must be true” to “if it conforms with my beliefs, it must be true.” We click and share headlines that affirm what we think, and those clicks and shares translate into dollars, which in turn motivate media companies and fake-news hucksters to crank out more headlines that further cement our beliefs. It’s a self-reinforcing system—and an enormous danger for democracy.

Because elections aren’t just about voting. They are about what you do with the outcome of that vote—a process that’s increasingly in peril. As a pair of Harvard government professors pointed out recently:

In a democracy, partisan rivals must fully accept one another’s right to exist, to compete and to govern. Democrats and Republicans may disagree intensely, but they must view one another as loyal Americans and accept that the other side will occasionally win elections and lead the country. Without such mutual acceptance, democracy is imperiled. Governments throughout history have used the claim that their opponents are disloyal or criminal or a threat to the nation’s way of life to justify acts of authoritarianism.

What feels so unmooring about the results of 2016 is that it’s no longer clear that we agree to let each other win, and govern. Because in the Truman Show of fake and weak political news, the other side never really wins: They are losers and haters. They steal elections. They should be locked up.

Can we fix this? Yes—but we can’t (nor should we want to) go back to a world where media corporations served as our political referee by dint of controlling the distribution of news. We’re going to need some other way to establish what we agree on. Some of that will involve technological fixes and artificial intelligence; some will be about the marketplace; and some of it will be about all of us taking part.

And there are hopeful signs that people prefer truth to lies, if given a chance to sort one from the other. Wikipedia shows one form this can take—a strong base of user participation, along with an increasingly sophisticated system for weeding out garbage and trolls. Here at MoJo, we’ve found that a growing number of people from across the political spectrum respond to our painstakingly fact-checked reporting. Our web traffic has increased more than 50 percent this year, with people paying especially close attention to our deep investigations. And a growing number of those visitors choose to support the journalism, too. Just in November, some 8,000 people subscribed to our magazine—that’s eight times the number who would have done so in a typical month.

MoJo isn’t alone: At the Institute for Nonprofit News, you can find more than 120 organizations, from national shops like the criminal-justice-focused Marshall Project to tiny local newsrooms like NJ Spotlight, dedicated to building accountable reader-supported journalism across the nation.

If that movement grows, it will end up building something many people said was not possible: durable news organizations with a wide audience, supported by their users and dedicated to honest, fearless reporting on power and the powerful.

If that vision appeals to you as an alternative to clickbait, creeping authoritarianism, and conspiracy-minded deception, you might consider closing out your year by supporting one—or more!—of these organizations. (Or for that matter your local public radio or television station, or the newspaper or magazine of your choice.)

We’d love for MoJo to make the cut, and to be able to count on your advice and input in the coming years. But what matters most is putting a marker down on the side of accountability, independence, and truth. Those are incredibly powerful things. And people who don’t believe that have a big surprise coming in 2017.