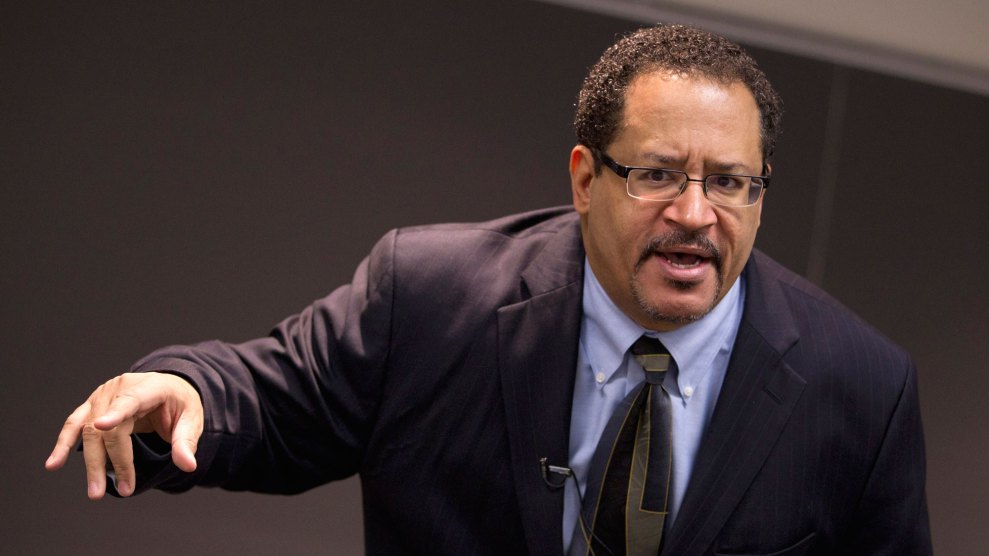 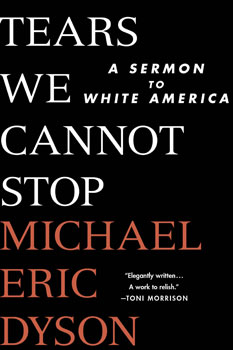 The election of Donald Trump sent things spinning in America and got people talking about “whiteness.” Did Democrats ignore the white working class? Was Trump making a legitimate appeal to rural America, or was his rhetoric a thinly masked courtship of white racists? If progressives want to win the next presidential election, do they need to abandon identity politics?

As befuddling as it all seems, the author Michael Eric Dyson, a Georgetown University sociology professor and Baptist minister, has a pretty simple message: If America is to improve racial harmony, then white people—all of them—will need to get on board.

In Tears We Cannot Stop: A Sermon to White America, out this week, Dyson doesn’t sugarcoat what he expects from “white brothers and sisters.” He demands action, not just empathy. The book calls on all whites, urban and rural, to get involved, and Dyson even offers a list of ways to do so. You might start reading notable black authors (James Baldwin is a favorite), create an “individual reparations account,” or find another way to pay a “secular tithe” that helps young black people in your neighborhood. He even calls on whites with social-media savvy to use their resources for good: If young whites were to tweet, for example, every time a cop let them off the hook for a minor infraction that a minority kid might have been punished for, it might help highlight policing disparities.

Not everyone, as Dyson is well aware, will be receptive to his ideas—in fact, he might just piss some people off. But minority voices in America can’t be buried, Dyson writes, least of all during a Trump administration

Mother Jones: Tell me a little bit about your childhood in Detroit.

Michael Eric Dyson: I grew up on the West Side—the “near West Side,” as they say—in what would be considered now the inner city. I had an exciting, interesting childhood, to be sure, with all of the challenges that ghetto life provides—but had loving parents. I was born in ’58, so the riot in Detroit in 1967 was a memorable introduction to the issue of race and how race made a difference in American society. And then the next year, of course, Martin Luther King Jr.’s assassination. And the Detroit Tigers winning the World Series. All of that made a huge impression on my growing mind.

MJ: Why the World Series?

MED: It introduced me for the first time to a team with a lot of black players. Detroit had about three of them: I think it was Willie Horton, Gates Brown, and Earl Wilson—might have been one or two more in ’68. But the St. Louis Cardinals, the team we were facing and eventually beat in a seven-games series, had Lou Brock and Bob Gibson, who just mowed down 17 batters in that first game and made me want to become a pitcher. To see all those beautiful black ballplayers in one place and thriving and doing so well made a huge impression on me.

MJ: So you were a good student? A big reader?

“I was trying to write a straightforward book of sociological analysis, and I failed. I felt compelled to preach.”

MJ: You have a great list of black authors at the end of your book. When did you start reading their books?

MED: Mrs. James, my fifth-grade teacher, introduced us to some of the great literature of African American culture. I won my first blue ribbon reciting the vernacular poems of Paul Lawrence Dunbar, in particular “Little Brown Baby.” She introduced us to these authors early on and taught us that their literature is important. Langston Hughes—we read his poetry. We studied who W.E.B DuBois was. And so she whetted our appetites.

And then I went to the library and began to read some of this stuff on my own. My discovery of James Baldwin was life-changing. I read Go Tell It on the Mountain first, and that was hugely impactful. The beauty of the literary art, the grappling with the black church, the wrestling with one’s identity in the bosom of a complicated black community that was both bulwark to the larger white society as well as a threshing ground, so to speak, to hash out the differences that black people have among ourselves.

MJ: You were ordained as a minister pretty young, right?

MED: Yeah, I grew up in the church and began to recite set pieces at the age of four and five, like many of the other kids. We began to connect literacy and learning and the lively effects of biblical knowledge and preaching pretty early. That was a tremendous impact. When I was 12 years old, my pastor came to the church: Dr. Fredrick Samson. And that was revolutionary because he mentored me and I got a chance to see up close the impact of a rhetorical genius. I received my calling and accepted it at around 18. I went to school four years later than most people because I was a teen father, hustled on the streets, worked, lived on welfare and the like, and didn’t get to college until almost 21. That’s when I officially got licensed and ordained, right after that.

MJ: You note in this book that you felt a sermon coming—as opposed to a sociological work.

MED: I was trying to write a straightforward book of sociological analysis, or at least cultural criticism, and I failed. I’ve written a lot of other books and this book was different. I couldn’t just say what I wanted to say in the same style that I said it in those other books. I felt compelled to preach.

MJ: You also write that Trump’s victory was America’s response to eight years of Barack Obama. In terms of racial attitudes, do you think his victory uncovered something new—or merely revived things that never went away, but that many of us had forgotten?

MED: I think it’s both. When people are not sure about their future, when their economies are suffering, when their personal fortunes are flagging, we have often in this country turned to nativism and xenophobia and racism and anti-immigrant sensibilities and passions to express our sense of outrage at what we can’t control—and to forge a kind of fitful solidarity that turns out to be rather insular—we look inward and not outward.

“The problem is we are left only with empathy, without substantive manifestations of that empathy.”

As a result, the demand for racial (and sexual) justice gets reduced to politics of identity—and excoriating the so-called perpetrators of the identity politics. What the left ends up missing is that politics have always been at the heart of American culture; it’s been a white identity that’s been rendered invisible and neutral because it’s seen as objective and universal. As a result, we don’t pay attention to how whiteness is one among many racial identities, and that identity politics have been here since the get-go. But they only become noticeable when the dominant form gets challenged—when the invisible is made visible, when the universal is seen as particular. That’s what people of color do when they challenge white privilege and unconscious bias. In that sense, it’s an ongoing process.

MJ: One line that really stuck with me came when you were talking about urban white people looking down on rural whites as “poor white trash.” You write, “In the end, it only makes the slaughter of our people worse to know that your disapproval of those white folks has spared your reputations but not our lives.” Are you basically saying to the “good” white people who didn’t vote for Trump that not being racist isn’t enough?

MED: Right. It’s not enough to be against something. What are you for? It may be, to a degree, consoling that white brothers and sisters did not vote for Trump, and do not participate in that brand of animus, that gas-bagging of enormous bigotry. But the problem is we are left only with empathy—which is critical, if it can be developed—without substantive manifestations of that empathy. It’s one thing to attain it intellectually, but it’s another thing to do something about it. To challenge norms, presuppositions, practices in communities across this country—where the unconscious valorization and celebration of whiteness and conscious resistance to trying to grapple with black and brown and other peoples of color’s ideas and identities—makes a huge difference.

MJ: So you would say that’s one of the more important roles for an enlightened white person?

MED: Yeah, that kind of peer learning, that peer teaching, that peer evaluation, and then administration of insight. That is an extremely important role: how white brothers and sisters laterally spread knowledge, insight, and challenge in a way that white brothers and sisters will not hear it from a person like me, necessarily. I hope they read this book and engage with it, but other white people have a better chance of speaking more directly to the white folk they know, because they’re less likely to be subject to ridicule. They’re insiders, so to speak.