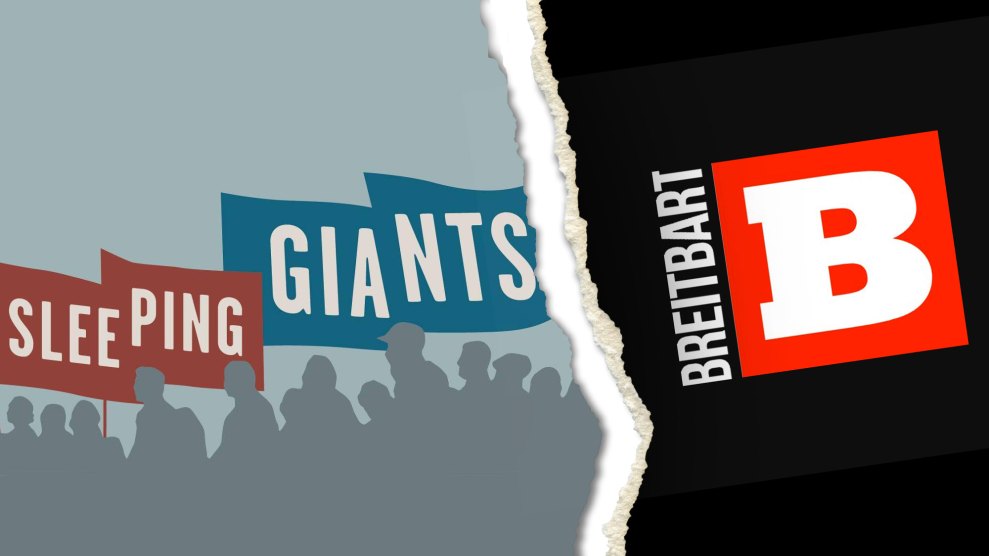 Shortly after the November election, a Twitter account called Sleeping Giants (@slpng_giants) began using the social media platform to chisel away at the ad revenue of extreme right-wing news site Breitbart. The account, which now has more than 73,000 followers, has a simple strategy: Tweet at companies who unknowingly have ads on Breitbart and teach them how to blacklist the site from their ad distribution algorithm. Sleeping Giants is the work of an anonymous group in the digital marketing industry, and their strategy seems to be working: To date, more than 1500 companies have joined the movement, including big names like Visa, Sephora, and Audi.

In addition to its Breitbart campaign, Sleeping Giants is also working to improve automated ad-buying systems, which give companies very little control over ad placement. Even when companies take the measures taught by Sleeping Giants to blacklist Breitbart, their ads can still end up on the controversial media site through various loopholes. We talked to one of the people behind Sleeping Giants—who wishes to remain anonymous—about how the idea gained momentum, the big-name companies who have signed on, and how the group wants to change online advertising for good.

Mother Jones: Describe the moment when you first started to consider this idea.

Sleeping Giants: Well, it probably happened a week after the election, when Steve Bannon was being thrown out to be a very senior advisor in the White House. We were curious and wanted to know more about this guy, so we looked at Breitbart after the election—it wasn’t even before—just to see what stuff they were printing. What we found is even worse than we’d anticipated. It was extremely racist and sexist and xenophobic. Once we saw that, the next logical step was, who’s responsible for paying for this? It turns out that everyone was.

“People are angry right now, and we understand, but you kind of can’t take it out on these companies that don’t know that they’re actually on the site.”

MJ: Why did you decide to use social media as a central part of your strategy?

SG: Companies have boned up their customer service on Twitter. I personally was at IKEA once—and this is kind of where the whole thing came from—I was waiting for, like, two hours for some shelves. Whereas on the phone you’ll have to wait, I just tweeted at them and literally within two minutes they wrote back, “Hey, how can we help you?”

Twitter’s a public forum. Once a tweet is there, companies kind of have to answer these questions. It makes them quicker to act and actually holds them accountable for their actions.

MJ: How did you get the word out?

SG: We went on the site and the first company we saw was a student loan company based in San Francisco. It seemed a little bit weird that they’d be supporting this kind of stuff. So we took a screenshot of the ad on the front page of Breitbart and tweeted that at the company and the CEO. Within an hour, the CEO reported back that the ad was down. It was very satisfying. So that ad was down, and then an ad from another company popped up. And then another and another. That’s when it sort of dawned on us that the problem was much bigger than getting a couple companies to take their ads off the site.

Following that, it picked up pretty quickly. We tweeted it out to some people we know, and they spread the word to their communities. The first two weeks were super intense; we were like, wow, we got 500, now we got 700, now 1000 followers. And then I think there was a critical mass at maybe 1000. It was like, okay, we’re doing this all ourselves, so how about we ask other people to do it? That’s when this thing totally caught fire.

MJ: How has your role evolved since you opened it up to the community?

SG: It’s gone from an employee role to a manager role, really. Every once in a while we’ll send something out, and we’ll retweet the companies that we think are going to be a little harder to reach. Because once we retweet it—we’re coming up on almost 75,000 followers up there—it amplifies the message. Then it usually gets through to big companies, because all of a sudden they’ve got 100 or 200 tweets coming their way rather than one.

You also really have to manage the mood. People are angry right now, and we understand, but you can’t take it out on these companies that don’t know that they’re actually on the site. We’ve made that pretty clear from the beginning; we tell people it’s about informing advertisers, first and foremost, and if they have questions, answering the questions. We’re trying to make this almost a service for companies.

“We just don’t think that brands should have to rely on a Twitter handle to know where their ads are.”

I think in the first six weeks, I personally had, like, a heart attack. It was really, really busy. Now the community kind of takes care of itself in a way. People have been able to manage other followers that come in and teach them the way. It’s a pretty positive community.

MJ: What’s the most surprising response you’ve heard from companies that you’ve reached out to?

SG: Early on, I think the thing that surprised us the most is Kellogg’s. Kellogg’s is the first big company that did it. They did it very publicly, and they made a statement. That was hugely helpful to us and also really validating to what we’ve been up.

I think the most surprising response on the other side has been Amazon. Amazon is like the white whale of our group. They probably get upwards of 10,000 tweets a day, and we’ve not heard word one. Buzzfeed did an article a month ago that there’s some internal unrest about it, that people who work there are feeling really upset. But Amazon has been tone deaf at best. It’s surprising coming from a company that came out so strongly against the Muslim ban, surprising coming from an owner who also owns the Washington Post, which has been very critical of the ban, and who obviously values quality journalism.

MJ: Have you been able to calculate how much ad revenue you’re cutting from Breitbart?

SG: I don’t think we’ll ever know. It’s a private company, and they have very wealthy benefactors. But ultimately, when you remove lots of companies and especially bigger companies from the ad exchanges, that drives the price for the ad space down. That’s why we see only Amazon, maybe a couple of other bigger companies, and then all smaller, more local ads on Breitbart now. The local companies—they don’t know that they’re on there, but they wouldn’t have been able to get on there if there were a lot of big companies competing for the space.

MJ: I noticed from your Twitter feed that you also started a campaign against the e-commerce platform Shopify.

SG: Yes, that’s another one. Shopify basically serves up the platform for Breitbart to sell all their merchandise. They’re allowing Breitbart to use their platform to make more money and print more inflammatory articles.

MJ: Shopify responded, right? And they argued it was important to protect free speech?

SG: Yeah, which is bullshit. Number one, hate speech is different than free speech. If you’re targeting a certain group of people on purpose and aiming your readership at them, that’s hate speech. It’s pretty simple. Number two, you’re making money off of this. That to us doesn’t wash.

MJ: In your FAQs, you mention your hopes of engaging in a broader effort to prevent the funding of hateful content through corporate ad dollars.

SG: We can do this all day long, but ultimately it’s going to burn everyone out and the message is going to get lost. We just don’t think that brands should have to rely on a Twitter handle to know where their ads are. They should be able to know that from the companies that are placing their ads.

MJ: How do you envision getting there?

SG: We’re trying to spread the word to advertisers that they need to be more careful. We think that in general the message is coming across pretty loud and clear right now, but we would like to partner up with a governing body to figure out how to change this in the future.

MJ: What kind of governing body?

SG: There are some industry standards that exist for advertising that are there to guide the industry, but ultimately there should be some real rules. It’s a little bit like the Wild West right now, so everyone can just spray ads all over the place. We’ve taken screenshots of companies that said, “Oh we have no control of where are ads are going; someone else decides that.” That seems really out of whack.

Note: Neither Amazon nor Breitbart responded to a request for comment.