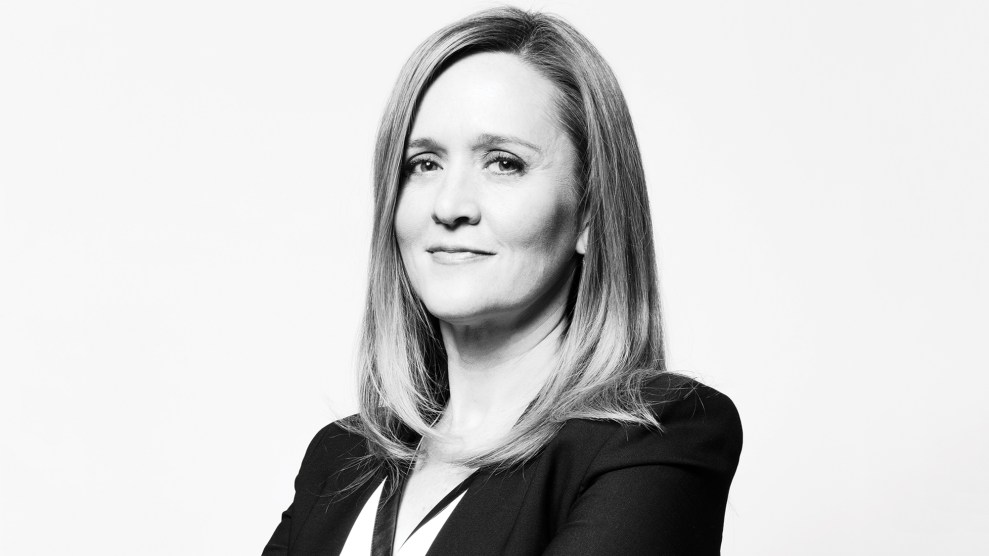 Samantha Bee picked a great moment to crash TV’s comedy host fraternity. Just over a year ago—after 12 years as a correspondent on The Daily Show With Jon Stewart, and just as Donald Trump was mounting his hostile takeover of the Republican Party—the Canadian-born comic launched her own TBS prime-time show, Full Frontal With Samantha Bee. Her sass and wit are a good match for a billionaire bully president who once bragged about grabbing women by the you-know-what. Bee pummels Trump like a piñata, sprinkling her brainy, lightning-speed satire with plugs for Planned Parenthood and protest marches. (On Saturday night, she’ll be serving up a Trump roast at her Not the White House Correspondents’ Dinner—Trump is boycotting the actual event.) Her weekly show caught on quickly, nearly tripling its viewership in its first year—Full Frontal now beats Trevor Noah and Conan O’Brien in the ratings game. When I first met her, last summer outside the Republican convention, Bee enlisted me to help her snag an interview with Roger Stone, the veteran GOP dirty trickster and longtime Trump adviser.

Samantha Bee: You were my Roger Stone concierge!

Mother Jones: That’s right. You wanted an interview in which he would bare that big Richard Nixon tattoo on his back. He said he’d do it if you showed up bare-chested. Whatever happened?

SB: He said he absolutely would be willing, but I’m trying to figure out the exact purpose of that meeting. I want it to accomplish something.

MJ: It’s been a year since Full Frontal launched. Any surprises?

SB: All of it. Showrunner Jo Miller and I kept the goal small and simple. It was hard to imagine that we’d get to do it past about six episodes. I just knew what our sensibility was. So in lieu of thinking, “Are people going to like it?” I tried to focus on, “Will we like it?”

MJ: After Melissa McCarthy spoofed Sean Spicer on Saturday Night Live, Spicer complained the show had gotten too mean. When dealing with this White House, can satire be too mean?

“I don’t listen to the national anthem ironically. It’s a beautiful song. I love it!”

SB: There is no hard and fast rule. You’re just sort of in the moment—like, “Ehh, that feels like we’re pushing a joke too far. Maybe we can pull it back or express it in a different way,” or “Would I want this joke to exist in the world independently of me?” It’s very guided by instinct.

MJ: Is comedy an effective weapon against a person like Trump?

SB: I mean, the worst thing you can do to a dictator is laugh at him, but I don’t feel like we’re having any resounding effect. My goal is to make a show that we find cathartic, that gives us a voice. How people receive it is not my job anymore. I don’t really think our show is going to effect change, but I am okay with that.

MJ: You had an intriguing interview with Glenn Beck at Christmastime—I loved the sweaters—about our political rift. Beck admitted he’d done damage by being so divisive. He said to you, “Please don’t make the mistakes that I made.” Do you think this is a time for people to try to come together—or more of an oppositional moment?

SB: Both. Listen, we’re not in kumbaya town here, but you need to be able to talk to people—you need to be able to agree from time to time if we’re going to get anywhere. Once you have started a civil dialogue, it’s a much smoother road to compromise. The key thing to remember is it’s a daily practice. It’s not easy. Glenn and I, in the strongest possible terms, disagree on a lot of things. When you can agree on one thing, you should have no expectation that suddenly a person is converted to your way of thinking. You have to be willing to be frustrated constantly. [Laughs.]

MJ: Was that conversation an example of the left and right coming together in mutual opposition to Trump?

SB: Well, there are certain things we can all agree are terrible for America. [Beck] loves this country. I love this country. I chose this country—I immigrated here on purpose. I don’t listen to the national anthem ironically. It’s a beautiful song. I love it! I take my citizenship extremely seriously. I find myself drawn to the Constitution more and more with each passing day of this presidency.

MJ: Enjoy it while you can.

“It’s a very fast-paced show with a million references, and we like it that way.”

SB: We like to put nuggets in there that only certain people will get, or we like to imagine that maybe people will look things up after. It’s a very fast-paced show with a million references, and we like it that way. There’s also a million science fiction references for our dork fans—we are also dorks. We’re not playing to a particular crowd.

MJ: Are you drawn to other mile-a-minute comedians, like the late Robin Williams?

SB: I’m not really trying to borrow from anybody. The pace was just born out of our need to cram in as many jokes in as possible—I started needing to talk faster! I like the energy of being forward—leaning into it, literally, physically.

MJ: When Mary Tyler Moore passed away, you went on and talked about how much she inspired you. Do you see yourself as a role model for a new generation of Samantha Bees?

SB: [Laughs.] I can’t speak to that. I think we’ve proved that a woman can host and the world does not end. I loved Mary Tyler Moore. The effect she had on me was that it would never have occurred to me that a woman couldn’t headline a show, run a business. It’s in my bones because of people like her.

MJ: All the late-night comics slam Trump, but you promote protest events like the Women’s March and raise money for groups with political viewpoints. Do you see yourself as an activist?

SB: There’s a very fine line between political comedian and activist, and I don’t really think I fall over into the activist category. Listen, if we’re going to make a statement with a T-shirt, why wouldn’t we do something with the proceeds? If it supports a charity that’s really boots-on-the-ground doing hard work in communities, it’s a joy.

“You cannot invite Sean Penn! He will storm the stage and grab my microphone away.”

MJ: Tell me about this Not the White House Correspondents’ Dinner you’re hosting. Can I invite Sean Penn?

SB: Oh my God, you cannot invite Sean Penn! He will storm the stage and grab my microphone away. (I’m joking.) The idea came from a three-way conversation with Jo and producer Alison Camillo in late November or early December. Trump’s vision for the press was well established, and we knew it was about to get worse. I thought, “I wonder what’s going to happen to that dinner? Will he show up? Who’s going to do the comedy? Will people boycott it?” Then we almost simultaneously thought, “We should have our own.” Because there was a lot of stress around here, quite frankly, adjusting to this new reality. It felt really heavy. We wanted to do something that could put a bright spot on our horizon.

MJ: Will this be a protest event, or just an opportunity for people to drink and have a good time?

SB: Freedom of the press is under attack. Our show couldn’t exist without the hard work of investigative journalism that gets no attention, so this dinner is really an opportunity to thank those outlets. It’s also an opportunity to have a super fun event. It feels like our coming-out party a little bit.

MJ: Have you ever been to a White House Correspondents’ Dinner?

SB: I went by myself to one in 2008. I was massively pregnant—just massive. There are no pictures of me. I did not walk the red carpet. I sat at a table and ate a dinner and watched people take pictures with George Bush. That was pretty much it. I understood why it existed. I confess I didn’t love it. I had a lot of questions after. Have you been?

SB: Did you enjoy them?

“I find Donald Trump so haphazard, and that keeps me up at night.”

MJ: Ten years ago, it was a lot more journalists. But then, as it became glitzier, the working journalists I would enjoy hanging out with got squeezed out. Now I confess that I do not enjoy it. You make useful connections, so I’m not a hater. But I went to the radio and TV dinners—which is sort of the poor cousin to this—in 2004 or 2005. Bush came out and he did his comic presentation about looking for WMDs.

SB: I remember that.

MJ: Well, I was not laughing. I was so upset, my wife said, “You can’t go to bed. You have to write about this.” I wrote about it and I said this was awful, and it showed everything that was wrong with Washington. It was one of the most popular pieces that I ever wrote. Enough about me. What frightens you the most about Trump and his crew?

SB: Their unpredictability. I find him so haphazard, and that keeps me up at night. I’m just not convinced it’s part of some grand plan, and if it is then I’m very worried about what that plan is. Are you just throwing stuff at the wall? Do you have your own White House leakers?

MJ: Thank God for some of these leaks.

MJ: So why do you think Trump hasn’t tweeted anything mean about you yet?

SB: Maybe not ever. I’m okay with that, too. Having him tweet about you unleashes the dogs, so it’s not something I’m waiting around for with joy in my heart. When it happens, we’ll know immediately. It will be as unmistakable a feeling as a tsunami.