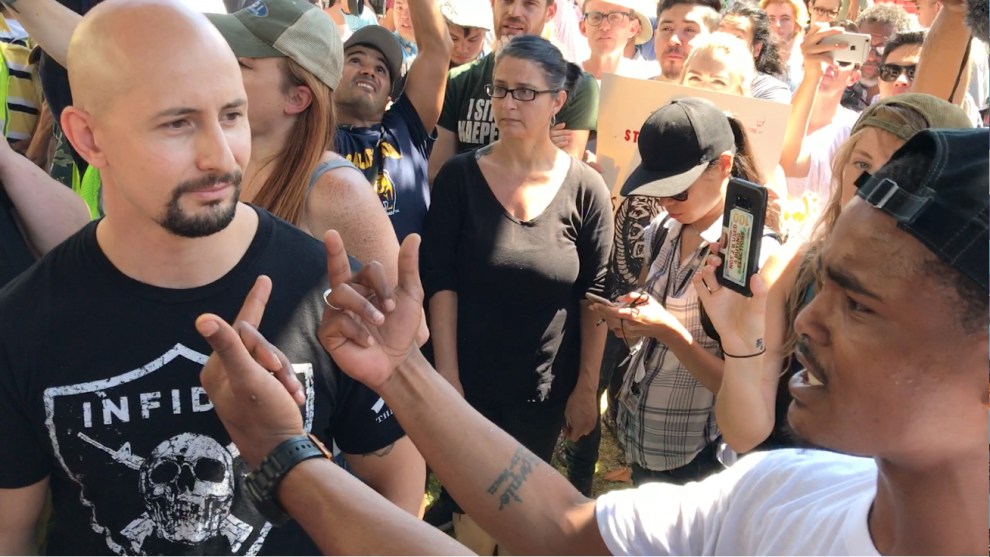 Over the weekend, thousands of people hit the streets of San Francisco and Berkeley, California, completely overwhelming far-right rallies that were expected to attract white supremacists. The locals were fed up. Back in April, a Berkeley rally consisting of several hundred alt-right activists, including white supremacist groups, had devolved into a bloody all-day brawl. Two weeks ago, some of those same supremacists helped organize the “Unite the Right” rally in Charlottesville, Virginia, where 32-year-old Heather Heyer was killed when a neo-Nazi drove a car into a crowd of counterprotesters. A week later, an attempted far-right rally in Boston drew some 20,000 marchers opposed to white supremacy. Last weekend marked the latest attempt of far-right and white supremacist groups to hold provocative rallies in major American cities—and once again, they were dwarfed by the anti-racist demonstrators.

Much of the coverage of Sunday’s non-rally gave the impression of violence and chaos.

But that wasn’t the story many Americans heard. Much of the coverage of Sunday’s non-rally gave the impression of violence and chaos, homing in on selected incidents and downplaying the dominant aspects of the day. The Washington Post‘s story, later tweeted by President Donald Trump, was titled “Black-Clad Antifa Members Attack Peaceful Right-Wing Demonstrators in Berkeley.” The San Francisco Chronicle story carried the headline, “Masked Anarchists Violently Rout Right-Wing Demonstrators in Berkeley.” CBS News reported that the “anti-hate” rally was “disrupted” by “scores of anarchists wearing black clothing and masks” who “stormed” the demonstration.

Most of the stories linked to a video I shot of five antifa protesters beating a right-wing activist. Little else from my two days of live-tweeting was picked up by news outlets. The beating I filmed was newsworthy, yes, but it should be viewed in the context of the rest of the day. Sunday’s violence was minimal compared with the extreme violence at April’s white supremacist rally in Berkeley. And while Sunday’s counterprotesters were intolerant of the far-right activists, the overall mood was festive. Organizers later declared the day a “victory against white supremacy.”

By focusing on scattered violence, reporters glossed over the bigger story: The Bay Area has become the latest target of fascist and other far-right groups promoting disruptive rallies across America, often in cities where they know they are not welcome. Many are organized or attended by the same people: alt-right leader Richard Spencer, (former) Identity Evropa leader Nathan Damigo, Fraternal Order of Alt-Knights street brawler Kyle Chapman, Proud Boy leader Gavin McInnes, white nationalist Mathew Heimback, and so on. In February, mayhem erupted at the University of California-Berkeley in response to a scheduled speech by right-wing provocateur Milo Yiannopoulos—who plans to return to campus with Ann Coulter, and possibly Steve Bannon, in late September.

The recent terrorist attack in Charlottesville seems to have turned otherwise disinterested people strongly against these groups. Organizations that previously affiliated with the alt-right have been trying to distance themselves—publicly at least. Leaders are fighting among themselves, and the movement seems to be fraying.

The narrative that antifa “stormed” the demonstration is false—they coordinated the counterprotest with other local groups.

Since Charlottesville, attempts by these groups to hold physical space have been drowned out by larger crowds of people denouncing racism. In San Francisco, where the right-wingers were granted a permit, and in Berkeley, where their application was denied, no more than a couple of dozen of them showed up. Attending or helping plan the rallies were Trump supporters, affiliates of the Proud Boys (a “Western chauvinist” group known for street violence), and members of “Patriot Prayer,” a group that organizes with armed “three percenter” militiamen—whom I once went undercover to report on.

The narrative that antifa “stormed” the demonstration is false. Antifa didn’t invade; they were one group among many that organized the counterprotest with other left-wing groups such as the Democratic Socialists of America—not to mention black and immigrant churches. Many attendees expressed surprise at the unprecedented level of coordination between groups that don’t always get along. Antifa organizers reached out to local businesses, handing out anti-hate window signs and flyers to educate business owners about the white supremacist groups active in the Bay Area.

Most of the right-wing demonstrators were handled without violence. The morning before the rally, attendee Johnny Benitez posted a picture of himself flashing the “okay” hand signal (an alt-right meme) while holding tiki torches like those used by the neo-Nazis in Charlottesville. When he arrived in Berkeley, he spoke to news cameras for over an hour, until counterprotesters surrounded him, chanting “black lives matter” and “Nazi scum off our streets,” at which point he left the park without incident. I witnessed a number of others who were dealt with in a similar manner.

When a group of hundreds of black-clad protesters later arrived to the rally site and poured over the police barricades into Martin Luther King Jr. park—a space occupied months ago by white supremacists—I heard several normally dressed protesters shout “thank you,” something that, in years of attending and covering protests in the Bay Area, I have never seen.

To be clear, there were other moments of actual violence. A right-wing activist in an Augusto Pinochet shirt pepper-sprayed a crowd of people, including me, and was subsequently beaten. Joey Gibson, organizer of the aborted “Patriot Prayer” rally in San Francisco, appeared at the Berkeley protest and was chased and hit with a stick before running to the safety of police officers in riot gear. I also saw the police violently confiscate a woman’s service dog, pin her to the ground, and arrest her. I saw cops escort right-wing activists out of the park for having prohibited items such as helmets and selfie sticks. They were not arrested, but I saw one left-wing activist put in a police car for possessing a face mask.

Why was media coverage so distorted? There are several reasons. One is that many of the people writing about Sunday’s events weren’t on hand to witness them. The Post‘s Kyle Swenson was not in Berkeley, a fact he does not make clear in his article. And some journalists had ideological axes to grind. Far-right twitter troll Hector Morenco hijacked the video I shot of the right-winger being beaten and added a fake caption: “Man walking to grocery store in Berkeley mistaken for being a Nazi is beaten into a coma.” The beating victim was not walking to a grocery store and he was not put into a coma, but this fake news was shared by prominent conservatives including National Review senior editor Jonah Goldberg and MSNBC host Joe Scarborough—who later undid his retweet. (Goldberg responds to our dispute here.)

And then there’s the age-old problem: Reporters often give more weight to sensational moments than they do to the deeper issues. When I arrived at the rally site on Sunday, there were no more than 10 right-wing activists on hand, and whenever an argument erupted between one of them and a counterprotester, they were swarmed by reporters.

Antifa activists are press-shy in part because they’ve been identified and targeted online by white supremacists.

What’s more, in a country with strong press freedoms, journalists often feel entitled to photograph whomever they wish. Rather than acknowledging that some people don’t want a camera in their face—especially when, like antifa activists, they’ve been identified and targeted online by white supremacists—some reporters grow testy.

Frank Somerville, a news anchor for local Fox affiliate KTVU, posted on Facebook that he was a victim of “hate” after protesters told him not to take their picture and shouted, “We’re not interested in talking to you!” “In my opinion, these people dressed in black are just as hateful and intolerant as the people they are protesting against,” he wrote. Equating counterprotesters who don’t want to be photographed with white supremacists—who very recently engaged in deadly violence—only reinforces people’s distrust of the news media.

Assaults and other violence are newsworthy. Journalists’ hurt feelings are not. But most importantly, reporters shouldn’t lose sight of the big picture: Fascists and other far-right extremist groups in America are visible and organized in a way that they haven’t been in decades. And at least for the moment, their movement is on the defensive.

Correction: This article has been revised to reflect the fact that rally organizers applied for a protest permit in Berkeley, but were rejected.