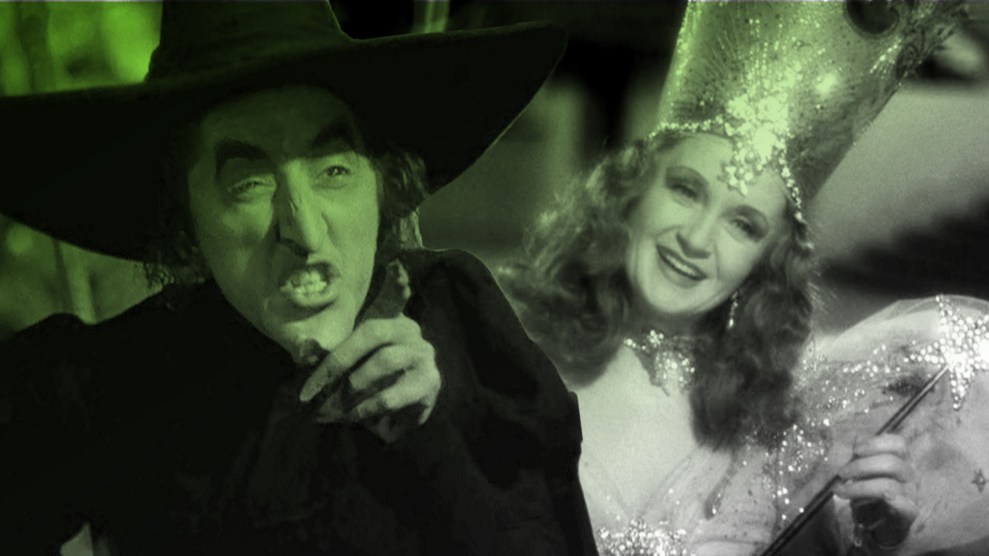 In 16th- and 17th-century Europe, tens of thousands of women were rounded up and slaughtered for being outcasts in some of society’s earliest witch hunts. But fast-forward to 2017, and suddenly it’s rich white guys who are co-opting the term. After numerous allegations of sexual harassment surfaced about film executive Harvey Weinstein, his pal Woody Allen warned in an interview with the BBC that we might be heading into “a witch hunt atmosphere, a Salem atmosphere, where every guy in an office who winks at a woman is suddenly having to call a lawyer to defend himself.”

As you let that sink in, let’s take a walk down memory lane to review how witches went from being persecuted to trendy:

1500s-1600s: Social upheaval and sectarianism lead to witch trials across Europe—tens of thousands are executed. Older women, outcasts, and healers are particularly vulnerable. The trials, Barbara Ehrenreich and Deirdre English note in their book Witches, Midwives & Nurses, were “a ruling class campaign of terror directed against the female peasant population.”

1641: Moral panic hits Massachusetts: “If any man or woman be a witch, that is, hath or consulteth with a familiar spirit, they shall be put to death.” For Puritans, “witches explain the presence of not only illness, death, and personal misfortune,” historian Carol Karlsen later notes in her book The Devil in the Shape of a Woman, but also “behavior antithetical to the culture’s moral universe.”

1647: Alse Young, a Connecticut resident, is the first colonist executed for alleged witchcraft.

1692-93: At the Salem witch trials, “afflicted” young girls feign demonic possession. Some 150 people (mostly women) are accused—19 are hanged. Notes one author: “The girls, if they were consciously play-acting, were utterly ruthless.”

1828: John Neal pens Rachel Dyer, the first novel about the Salem witch trials, calling Tituba—the slave who was the first person accused and the first to confess—a “woman of diabolical power.”

1893: A scathing critique by women’s rights crusader Matilda Joslyn Gage exposes the witch trials as, in one author’s words, “a misogynist shitshow.”

1907: In a play titled Votes for Women!, suffragist Elizabeth Robins likens the treatment of women seeking the vote to the earlier treatment of witches: “’Mad.’ ‘Unsexed.’ These are the words to-day,” cries character Miss L.

1953: Arthur Miller’s play about the Salem witch trials opens on Broadway. “It is only a slight exaggeration to say,” he writes later, “The Crucible starts getting produced wherever a political coup appears imminent.”

1957: The Massachusetts Legislature kind of apologizes for the Salem trials: “Even if lawful…[they] were and are shocking.”

1962: A new comic book heroine, Sabrina the Teenage Witch, is a cheerleader out to hex her classmates.

1964: TV’s Bewitched, starring Elizabeth Montgomery as a witch-housewife, is a “runaway success.” “For Liz Montgomery, Bewitched could be a particular triumph,” notes one reviewer. “She got it with no reliance on her [actor] father, Robert Montgomery.”

1990s: Witches are back in fashion. Hollywood pumps out Hocus Pocus, Charmed, Buffy, and The Craft. The Blair Witch Project, shot for $60,000, rakes in almost $250 million.

2006: Religious objections to its witchcraft themes puts the Harry Potter series atop the American Library Association’s list of “most challenged books of the 21st Century.”

2010: Christine O’Donnell, Delaware’s GOP Senate nominee, is outed by TV host Bill Maher as a dabbler in witchcraft. Her response, an ad declaring, “I’m not a witch…I’m you,” becomes instant parody fodder. “I’m not a witch,” jokes SNL’s Kristen Wiig. “I’m you. And just like you, I have to constantly deny that I’m a witch.” (O’Donnell loses to Democrat Chris Coons in the general election.)

2013: Poll: 46 percent of Americans prefer witches to Congress and 21 percent aren’t sure. Also more popular than Congress: potholes, zombies, and the IRS. (Okay, it was a pretty silly poll.)

2015: The website Slutist launches its annual Legacy of the Witch festival, and Girls creator Lena Dunham and pop star Lorde describe their mutual friendship with Taylor Swift as a “witches’ coven.” The feminist attraction to witches, Jezebel‘s Hazel Cillis tells the Guardian, is “about having a physical, mystical power that can create real, dangerous change in a world that would rather take power away from them.”

2016: The Crucible returns to Broadway. Elsewhere, rapper Azealia Banks stirs up the web with a video suggesting she sacrifices animals at home: “Real witches do real things.”

Azealia Banks via instagram, cleaning the closet she's been performing brujeria for 3 years in. pic.twitter.com/0OsoSdJynw

February 2017: A group called the Yerbamala Collective publishes an “anti-fascist spellbook,” urging witches to resist President Donald Trump. Singer Lana Del Rey takes part in an effort to bind Trump with a spell. “Why not?” she tells one interviewer.

May 2017: Trump tweets his humble opinion of the various investigations into possible collusion between his campaign and Russia:

This is the single greatest witch hunt of a politician in American history!

October 2017: As more and more women come forth to accuse Harvey Weinstein and other powerful men of raping, sexually harassing, or sexually assaulting them, Woody Allen tells the BBC he’s concerned about a “witch hunt atmosphere.” Author Lindy West fires back in a New York Times op-ed: “Sure, if you insist, it’s a witch hunt. I’m a witch, and I’m hunting you.”