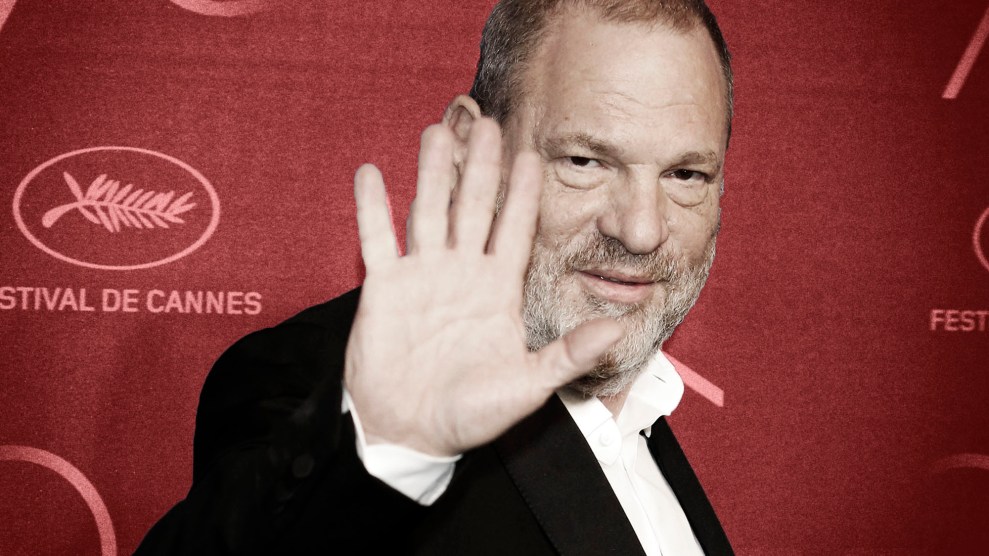 Harvey Weinstein at the Cannes Film Festival in May 2017. Dave Bedrosian/Future-Image/ZUMA

In bombshell investigations by the New York Times and the New Yorker, numerous women have come forward with accounts of being sexually harassed and, in some cases, assaulted by Hollywood mega-producer Harvey Weinstein. The stories reveal a repeated pattern of Weinstein allegedly luring and isolating women—often in their early twenties—into a private room and asking them for massages. According to the women, if they didn’t respond favorably to his advances, he would continue to press further, insisting others had done the same or even boasting of his sexual relationships with famous actresses and models. The allegations go back nearly three decades across his time heading Miramax and later The Weinstein Company.

Both the Times and the New Yorker allege that Weinstein used his power to threaten women into submission or enforce silence, with the Times reporting that Weinstein paid multiple settlements between $80,000 to $150,000. His targets were actresses, models, employees, and others in the film and entertainment business. Women feared that speaking up would damage their careers. When Ambra Battilana Gutierrez, a Filipina-Italian model, tried to press charges against Weinstein, for instance, incriminating stories about her past began appearing in newspapers. Gutierrez later signed a nondisclosure agreement and told the New Yorker she was unable to talk about the incident.

“He’s going to be working very hard to track people down and silence people,” Rosanna Arquette, who appeared in the Weinstein-produced Pulp Fiction, told the New Yorker. “To hurt people. That’s what he does.”

Despite Weinstein’s predatory behavior, he continued to make money off these women’s work, producing and distributing a slew of popular and award-winning films. Though his actions were considered an “open secret” in the industry, women are now speaking publicly for the first time about the allegations. Below, we’ve compiled a list of their accounts. Consider it a small glimpse into how the producer continued to profit—financially and in stature—off the work of the women he was allegedly abusing.

In the early ’90s, Arquette says Weinstein invited her to dinner at the Beverly Hills Hotel, under the pretense of picking up a script. When she arrived, however, she was told to meet him in his hotel room. Weinstein opened the door in only a bathrobe and asked her for a neck message. When she refused, he grabbed her hand and placed it on his neck, and then moved it toward his genitals. Her account appears in both the New York Times and the New Yorker.

Arquette would later appear in a small role in 1994’s Pulp Fiction, produced by Miramax, which Weinstein co-founded. She says Weinstein “made things very difficult for [her] for years.”

The film won an Oscar for best screenplay and made $107.9 million domestically.

In 1993, the actress says Weinstein invited her to his apartment after earlier that day meeting to discuss scripts and attending a screening together in Manhattan. Weinstein asked for a massage, telling her “everybody does it,” according to the New York Times. When she refused, he left the room and returned naked. “He literally chased me,” she told the Times. “He wouldn’t let me pass him to get to the door.” Kendall was 23 at the time.

Kendall later appeared in Swingers in 1996, which was distributed by Miramax. The film made about $4.5 million in the US and would later become a huge cultural hit.

Sorvino says Weinstein harassed her at the Toronto International Film Festival in 1995, while she was promoting Mighty Aphrodite. Weinstein’s company had produced the film (though Miramax was uncredited). “He started massaging my shoulders, which made me very uncomfortable, and then tried to get more physical, sort of chasing me around,” Sorvino told the New Yorker. Weinstein visited her at her apartment in New York City several weeks later.

Sorvino ended up winning an Academy Award for her role in Mighty Aphrodite, which made $6.7 million in the US.

Just as she was beginning to shoot Emma in 1996, Paltrow says Weinstein invited her to his hotel room for a work meeting, but then began touching her and asking if she would go to his bedroom for a massage. “I was a kid, I was signed up, I was petrified,” she told the Times. After Paltrow confided in Brad Pitt, her boyfriend at the time, Weinstein screamed at her over the phone and told her not to tell anyone else about the incident.

Emma catapulted Paltrow into fame, and she continued to appear in Weinstein’s work, including the 1998 film Shakespeare in Love. The movie won seven Oscars including “Best Actress” for Paltrow and “Best Picture,” which Weinstein won along with the other producers on the film; it was the second “Best Picture” win for Miramax. The film made more than $100 million domestically, bringing in more than $4 million during opening weekend alone.

During the Cannes Film Festival in 1996, Godrèche, already an established French actress, says Weinstein invited her to his hotel room after breakfast with another female executive, according to the Times. Weinstein had just acquired the rights to Ridicule, a film in which Godrèche starred, and Weinstein told her he wanted to discuss marketing campaigns. He asked if he could give her a massage and, she tells the Times, “the next thing I know, he’s pressing against me and pulling off my sweater.” She was later told by a female Miramax executive to not say anything about the incident, unless she wanted to damage the film’s release.

Miramax distributed the film in the US, and Ridicule was nominated for an Oscar for best foreign language film. It made a little more than $2.5 million in the US box office.

While Judd was shooting the 1997 thriller Kiss the Girls, Weinstein allegedly propositioned her multiple times, including asking if he could give her a massage or if she would watch him take a shower. She refused his advances, and told the Times she felt “panicky” and “trapped,” and later detailed the incident without naming Weinstein in an interview with Variety in 2015.

Neither Weinstein nor Miramax were involved in the production of Kiss the Girls, but Judd later appeared in 2002’s Frida, which was produced and distributed by Miramax, and in 2009’s Crossing Over, which was produced and distributed by The Weinstein Company (which the producer had founded a few years prior). Frida made nearly $25.9 million in the US box office, while Crossing Over flopped, pulling in just over $454,000 in the US on an estimated $19 million budget.

In 1997, Weinstein reached a $100,000 settlement, with a non-disclosure agreement, with McGowan following an incident in a hotel room, according to the Times report. McGowan had just appeared in Scream, for which Weinstein was an executive producer. McGowan declined to comment on the case to the Times, but spoke out on Twitter, saying: “Anyone who does business with __ is complicit. And deep down you know you are even dirtier. Cleanse yourselves.” McGowan has since called for the board of Weinstein’s company to resign.

Scream made more than $100 million in the US box office.

An Italian actress and director, Argento told the New Yorker that Weinstein forcibly performed oral sex on her in 1997 in his hotel room. Miramax was domestically distributing a film in which she starred, B. Monkey. Argento, who was in her twenties at the time, says the incident was a “horrible trauma” and that she felt extreme guilt for not fighting him off.

In the late ’90s, Jolie says Weinstein made unwanted advances on her in a hotel room, according to the Times. Jolie had just starred in the 1998 film Playing by Heart, for which Weinstein was an executive producer. Because of the incident, she “chose never to work with him again and warn others when they did,” she told the Times in an email.

Playing by Heart made more than $3.95 million in the US box office.

Garai, who starred in Dirty Dancing: Havana Nights in 2004 told the Guardian on Wednesday that Weinstein asked her to do an audition in a hotel room while he was only wearing a bathrobe. The British actress was 18 at the time. “I felt violated by it, it has stayed very clearly in my memory,” Garai said.

Miramax produced the film, and it brought in $14.1 million in the US.

In an interview with the Guardian, Seydoux said that Weinstein tried to assault her in Paris around 2012. According to Seydoux, Weinstein had insisted on meeting with her to discuss her career, but after meeting in the hotel lobby with another assistant, he insisted on talking in his hotel suite.

“This was never going to be about work. He had other intentions—I could see that very clearly,” Seydoux told the Guardian. “All throughout the evening, he flirted and stared at me as if I was a piece of meat.” Though she notes that she doesn’t entirely recall all the details, Seydoux says the two were talking when Weinstein “suddenly jumped on me and tried to kiss me.”

Seydoux had a small role in Inglourious Basterds, which was produced by The Weinstein Company and released in 2009. The film brought in more than $120.5 million at the US box office and was nominated for eight Academy Awards, including for “Best Picture,” and winning one for “Best Supporting Actor” for Christoph Waltz.

Delevingne wrote in an Instagram post on Wednesday that Weinstein sexually harassed her during a film audition. He allegedly brought her into a room with another woman and asked them to kiss. When she tried to leave, Weinstein walked her to the door and tried to kiss her. Delevingne had not spoken up about the incident until now. “I felt guilty as if I did something wrong,” she wrote in her post. “I was also terrified that this sort of thing had happened to so many women I know but no one had said anything because of fear.”

Delevingne has a role in Tulip Fever, which was distributed by The Weinstein Company in September of this year. It has made nearly $2.4 million so far in North America.