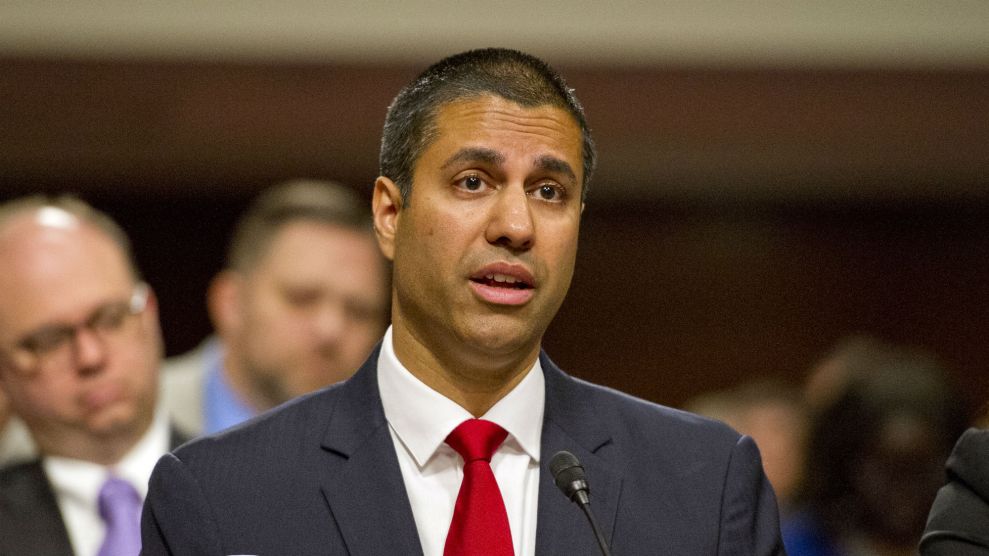 On Thursday, the Republican-led Federal Communications Commission voted on a series of actions that would eliminate regulations for local media ownership while approving a new TV broadcast standard developed by Sinclair. Both decisions will likely result in a major windfall for the Maryland-based company, paving the way for Sinclair’s proposed $3.9 billion merger with Tribune Media and for the widespread adoption of its Next Gen TV service.

The FCC’s two Democratic commissioners voted against the deregulatory decisions. “We have engaged in a series of media policy changes at this agency that are striking in the one thing that they have in common,” FCC Commissioner Jessica Rosenworcel, a Democrat, told reporters on Thursday. “They are all custom-built for a company called Sinclair Broadcasting,”

The five-member FCC, led by Republican Chairman Ajit Pai, voted on Thursday to loosen the rules on owning multiple TV and radio stations in the same market. The FCC’s announcement helps pave the way for Sinclair’s mega-merger with Tribune Media, a deal that would give the company well over 200 TV stations, including in New York, Los Angeles, and Chicago, the country’s three biggest media markets. The FCC also voted to remove the 40-year-old ban on a company owning a newspaper and a TV or radio station in the same media market as part of the FCC’s deregulatory spree on Thursday.

Before Thursday’s vote, Sinclair faced the prospect of offloading some of its stations if the Tribune deal went through in order to stay under a national ownership cap for broadcast companies—another rule the Trump FCC could potentially jettison. But Andrew Jay Schwartzman of the Communications and Technology Law Clinic at the Georgetown’s Institute for Public Representation says the FCC’s latest round of deregulation may allow Sinclair to retain more of its stations should the Tribune deal get approved. “It makes it possible for the deal to go through, and the changes yesterday reduce or completely eliminate the number of stations they’ll have to divest,” Schwartzman says. In short, thanks to the FCC, Sinclair would emerge from the Tribune merger even larger and more lucrative than previously expected.

But scrutiny of that deal has ratcheted up dramatically this week. On Monday, two high-ranking House Democrats asked the FCC’s inspector general to investigate whether Chairman Pai “has taken actions to improperly benefit Sinclair Broadcast Group.” And on Wednesday, 15 Democratic senators—almost all with a Sinclair-owned or -operated station in their state—also requested that the FCC’s inspector general investigate whether Pai’s decisions were intended to make it easier for Sinclair to gobble up new TV stations and expand its local TV empire that stretches from coast to coast.

Thursday’s actions were the latest example of the FCC’s three-member Republican majority removing barriers to Sinclair’s expansion. Sinclair’s $3.9 billion proposed merger with Tribune, for instance, would not have been possible if Pai and his fellow Republicans had not reinstated the so-called ultra high frequency discount, a Reagan-era regulatory loophole that lets broadcasters count only half of their audience reach for ultra high frequency channels—that is, channels 14 and higher. The FCC under President Obama had eliminated this loophole after TV went digital in 2009, but Pai and his fellow Republicans brought it back earlier this year, opening the door for the Sinclair-Tribune deal.

Pai has repeatedly said his actions were not intended to benefit Sinclair or any other specific company. He insisted that his decisions since Trump made him FCC chairman in January were part of a larger campaign to update the nation’s media laws. “My actions have been motivated by my belief that a strong over-the-air broadcast service advances the public interest,” he wrote in a September 15 letter to Rep. Frank Pallone (D-NJ), the ranking member of the House Energy and Commerce Committee. “They have not been fueled by a desire to help any particular company.”

The request for an investigation by the 15 Senate Democrats includes a timeline outlining the Trump administration’s multiple interactions with Sinclair and the FCC’s actions that have benefited Sinclair, suggesting that Pai has used his influence to help the Maryland-based TV giant. “Put simply, this timeline suggests a disturbing pattern of a three way quid-pro-quo involving Sinclair, the Trump administration, and Ajit Pai,” the letter reads. “Because of these facts, we are gravely concerned that Chairman Pai may have engaged in a pattern and practice of activity related to the Sinclair-Tribune transaction in a way that imperils the independence and public interest mission of the FCC.”

The fate of the Sinclair-Tribune merger rests in the hands of the FCC, which has final say over whether the merger can go forward. A decision is expected early next year.

Read the two letters from House and Senate Democrats below.