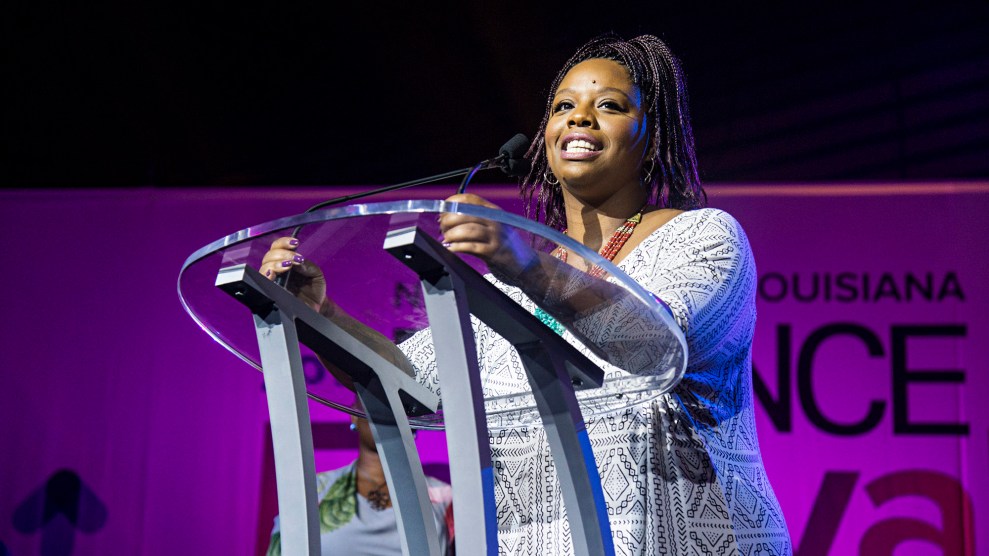 For most of us, the Black Lives Matter movement began in 2015, after the death of Michael Brown Jr. at the hands of a Ferguson, Missouri, police officer. But for Patrisse Khan-Cullors, one of three black women credited with launching the hashtag and leading the movement to follow, BLM’s origins go back much further.

Maybe the movement began when Khan-Cullors, raised in an impoverished suburb of Los Angeles, first saw her older brothers stopped and questioned by police. (She was 11.) Or when she was a high school freshman and her teenage brother Monte was arrested for a break-in and tortured, he claimed—starved, beaten, and placed in solitary confinement—by guards at the Los Angeles County Jail.

Her new memoir, When They Call You a Terrorist, is a searing coming-of-age story that counters the narrative of Black Lives Matter as violent and dangerous, as its enemies claim, or obsolete, as some disheartened supporters have argued. Instead, Khan-Cullors offers a portrait of a resistance movement guided by love.

Mother Jones: You wrote this book while pregnant. How did that affect your thinking about this movement to protect young black people against police violence?

Patrisse Khan-Cullors: I don’t think our movement actually does a good job [supporting] black parents, black mothers in particular. I would hate for people to think that I’m just out here getting it, being able to do it all. It’s not true. The only way I’m able to participate fully is because I have people who are holding it down for my child and being his extended family.

MJ: You’ve attracted a lot of attention. What does that mean to you as a community organizer?

“A big part of the next step in this movement moment is building up black political power.”

PKC: Visibility isn’t necessarily for your own career. You get visibility to build power for others: “Have we changed conditions for black people?” But the other side is that there’s a lot more scrutiny. Not just by the state but by people you’re close to—people assume that now you have power, you should be doing things this way or that way. So, lots of visibility, lots of scrutiny, very little protection.

MJ: What are BLM’s biggest victories, in your view?

PKC: No. 1 is having a 40-chapter network that stretches from North America to the United Kingdom. The second thing is Black Lives Matter has worked with over 100 families that have been impacted by state violence. Finally: The Black Lives Matter Global Network’s relationship to the Movement for Black Lives—a broader coalition of which we are a part—has helped us incubate and design some of our most courageous projects, like Black Spring and Black Mama’s Bail-Out.

MJ: Donald Trump has been in office a year now. What lessons do you hope the left has learned during that time?

PKC: Stop blaming black people and poor people for the election’s results! Until the left—the white left in particular—is able to contend with its own racism, its own sexism, we’re not going to be unified to fight fascism. The white left actually needs to show up differently and challenge the ways that they understand who’s a viable candidate and who we should be supporting. A big part of the next step in this movement moment is building up black political power and having white leftists make space for new black leadership and challenging their own purism around who can lead.

Now it’s your turn to ask the questions!

What would you ask Patrisse Khan-Cullors? We’ll share your questions with Jamilah and she may ask them live at our event next month.

We may share your response with our newsroom and publish a selection of questions which would include your name, age, and location. Your email address will not be published and by providing it, you agree to let us contact you regarding your response. We respect your privacy and will not use your email address for any other purpose.