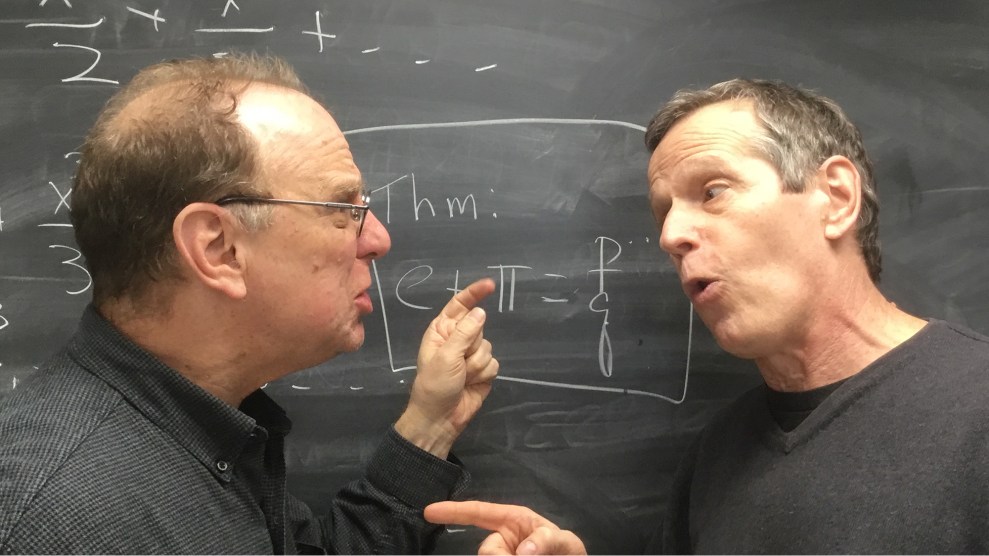 Tom Garrity (left) and Colin Adams.Photo courtesy of these guys.

Williams College mathematicians Tom Garrity and Colin Adams are best known outside of their field (and perhaps inside it, too) for their occasional public smackdowns on questions such as, “Which is the better number: π or e?” or “Which is the better operation: the derivative or the integral?” What better day than Pi Day 2018 to have these gentlemen go another round in the fiery pit of mathematical discourse.

Mother Jones: You are both learned men of numbers. Certainly you must agree on at least one question: Which is the greatest, most important number of all? Is it googol?

Colin Adams: Actually, my No. 1 number is one. Who can beat it? Every positive integer is the sum of a bunch of ones. Also…

Tom Garrity: Are you serious? 1 × 1 = 1? What’s interesting about that? All you get from any of your examples is more ones. It isn’t even an interesting number to write—it’s just a stick. Although I suppose it’s a great number if you can’t afford Ambien. Aren’t your students always falling asleep in class?

CA: They are not!

“Negative 1 is the linchpin upon which the financial world, with all its triumphs and barbarities, depends.”

TG: Are, too! The number to start with is -1. Now that’s a number. It creates the intriguing possibility of going negative. It allows for negative temperatures—don’t you care about the polar bears? More importantly, it allows for negative money. That means we can borrow, something you’ve obviously taken advantage of.

CA: Now you’re getting a little too personal, Garrity.

TG: The point is, because -1 enables debt, it is the linchpin upon which the financial world, with all its triumphs and barbarities, depends. It certainly beats your boring old stick.

CA: I gotta go with the big goose egg, zero. What a number! Much more than a mere placeholder, it’s the beginning of it all, the origin story for all numbers. And it’s the only number that, when multiplied by any number, returns itself.

TG: Zero? As in nothingness? Emptiness? A vacuum? The mere existence of zero forces us to face those moments when we wake up at 3 a.m. despairing that our lives have no meaning—that all is for naught.

TG: The imaginary number i. When you multiply it by itself, you get my top choice: -1. One of the great tragedies of humanity is that i was called “imaginary.” It doesn’t deserve that; i is not merely a perfectly sound number, but an absolute delight.

CA: I thought we were supposed to pick real numbers.

TG: There you go, always following the rules, bowing down to the Man. What a lack of imagination.

CA: You would stoop to such an obvious pun?

MJ: What is your third choice, Tom?

CA: No surprise there—you’re so predictable.

“No wonder you like imaginary numbers. You’re living in a dream world!”

TG: What? e is amazing. Take e to a power, like e2, e3, e4, etc. It keeps goes up and up and up. It’s the reason we talk about exponential growth, giving us hope that the world can become a truly better place.

TG: Not when there’s exponential growth in the ideas to solve those problems. I have faith in humanity.

CA: No wonder you like imaginary numbers. You’re living in a dream world!

CA: It has to be π. What a number! Every circle of radius r, no matter how big or small has area equal to π r2. Every circle has circumference 2π r. You take the circumference squared and divide by four times the area, what do you get… π! Pi is directly connected to the structure of the universe: π is π no matter what planet you’re on.

TG: But that’s true for all of these numbers. You don’t think the aliens are going to find i fascinating? π is great if you like the idea of going around and around forever without getting anywhere—a giant hamster wheel. I want to expand to regions unknown. I want exponential!

CA: You do know that this entire discussion is in honor of Pi Day? Pi has a special day because of how amazing it is. In fact, if you take all of your picks and add in π, you get one of the most amazing formulas of all time: eiπ = −1. Pi relates all your favorite constants. Even you must be impressed by that.

TG: Of course! That’s one of the most beautiful formulas ever produced.

CA: At least you have some taste. What’s your next choice?

TG: I pick ℵ0—aleph naught. Turns out there are many types of infinities. ℵ0 is the smallest. It is the size of the natural numbers {1, 2, 3, . . .}. And it is the beginning of an infinite ladder of infinities.

“We’re picking numbers…You might as well have picked ‘artichoke.'”

CA: The rules, Garrity! We’re picking numbers, not sizes of infinity. ℵ0 isn’t a number. You might as well have picked ”artichoke.”

TG: Again with the puny imagination. Of course ℵ0 is a number. You just have to expand your definition of “number.” It’s not a number if you’re stuck in schoolyard arithmetic or you spend all your time thinking about circles and π. But real mathematicians talk about ℵ0 all the time.

CA: Yes, because my infinite sum adds up to a finite number.

TG: I see. Maybe next time, you should pick a number you know something about.

CA: But nobody knows. It’s not my fault. Most math is not known. That’s why we still have jobs and get paid the big bucks: to discover new math.

TG: An AI will have your job soon enough. And why, of all the things we don’t know, would we want to know more about Catalan’s constant?

CA: Well, it’s also the volume of an ideal regular hyperbolic octahedron, so it has geometric significance. And that ties together geometry and number theory. Anything that reaches across whole different fields of math is pretty cool.

CA: There’s hope for you yet.