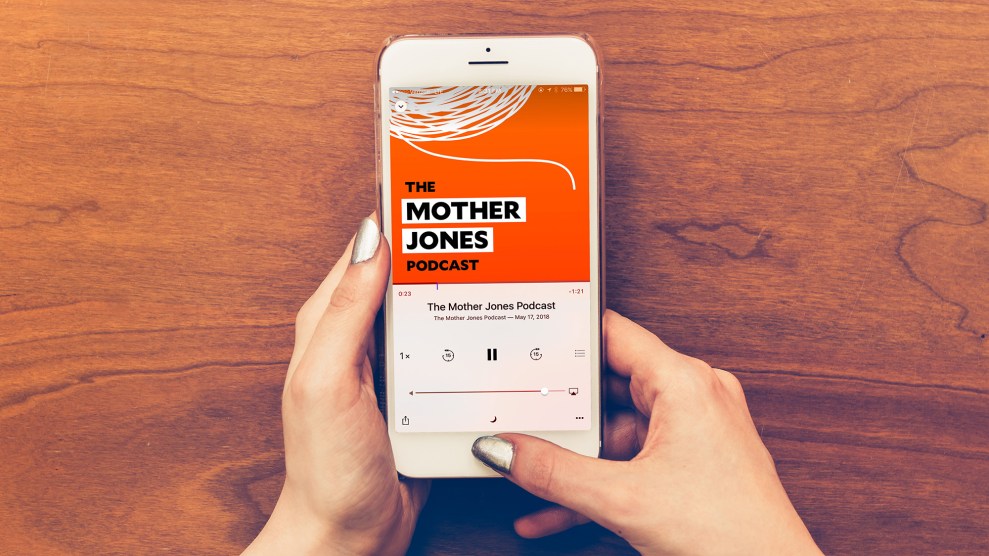 In each episode, MoJo’s brilliant reporter Jamilah King will go deep on a big story you’ll definitely want to hear more about. We’ll give you an inside glimpse behind some of our biggest and best investigations—think private prisons, electoral skullduggery, Dark Money, and Trump’s Russia connections—and smart interviews with our reporters and newsmakers. In essence, we are determined to make your week more informed by cutting through the chaos with the stories that really matter, told by the folks you have always trusted for smart, fearless, reporting.

On this week’s episode: It’s primary season in America. Senior Reporter Tim Murphy profiles the candidates ripping up West Virginia’s political blueprint and asks what their successes and failures mean for national politics come November. Tim will untangle the reasons why progressives there are going wild for a former paratrooper—and Trump voter—Richard Ojeda, while ex-con coal baron Don Blankenship, undeterred by a punishing loss, nonetheless tries and tries again to rehab his name. Remember, he just got out of prison after serving time related to a deadly explosion at a mine he oversaw in 2010. Read Tim’s twin profiles of Ojeda and Blankenship, and while you’re there check out MoJo filmmaker Mark Helenowski’s videos about the candidates.

In Georgia, Democrat Stacey Abrams just enjoyed a spectacular, history-making victory to become the first black woman to ever to win a major party’s gubernatorial nomination, but her toughest battle is ahead: Can this national political darling beat a well-funded Republican, in a deep-red state, to break another glass ceiling and become the first female black governor in America? Host Jamilah King met and interviewed Abrams—and profiled her for Mother Jones—and offers insights into the kind of woman she is and her chances come November.

Then it’s time for our resident Russia guru David Corn to make the extraordinarily complicated Mueller investigation understandable and tell us what happened recently. He’ll be back every week to help untangle this godforsaken mess. We’ll also chat to David Beard, the author of our weekly Recharge newsletter, giving you a jolt of good news.

Because, let’s face it, we all need it.

There will be more good news every week on The Mother Jones Podcast.

You can and subscribe using any of the following services: