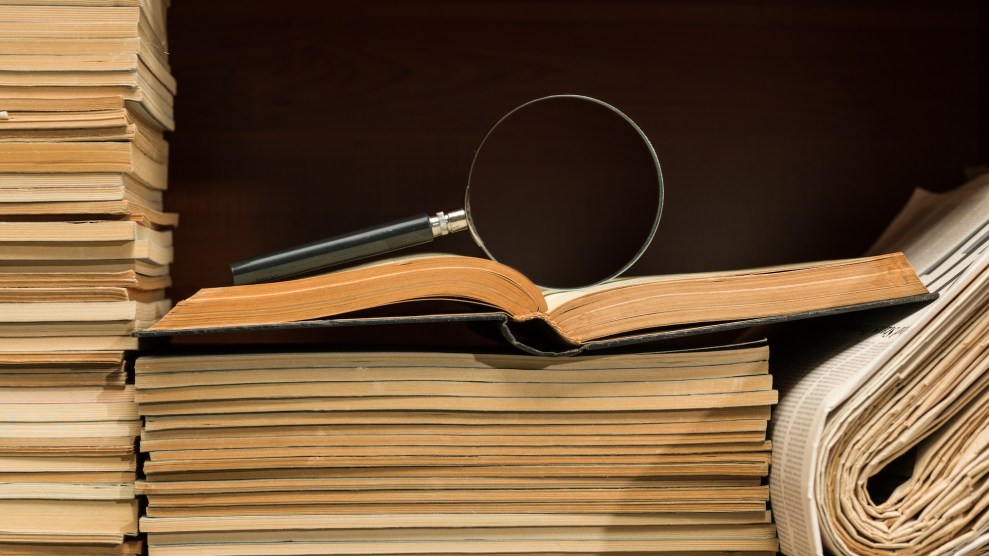 View of large amount of documents, newspapers, and books in classic library. A magnifying glass seen on top of books. No people are seen in frame. Shot with a medium format camera.selimaksan/Getty

The organization* that uncovered the world of offshore tax havens and rogue international finance in the Panama Papers and Luxembourg Leaks has shifted its attention to fake science. In collaboration with reporters from 18 news outlets all over the world, German newspaper Süddeutsche Zeitung examined 175,000 scientific articles published by five of the world’s most prominent pseudo-scientific publishing platforms. The result? The collaboration found that some 400,000 scientists worldwide have been published in these journals since 2013.

Predatory publishers target individual scientists by email, charge high fees in exchange for publication, and forego international peer-review standards to publish quickly and frequently. Some of these pseudo-scientific journals also publish work from employees of pharmaceutical companies. Some members of the International Consortium of Investigative Journalists reported that “In addition to failing to perform peer or editorial committee reviews of articles, the companies charge to publish articles, accept papers by employees of pharmaceutical and other companies as well as by climate-change skeptics promoting questionable theories.”

For example, the French newspaper LeMonde uncovered a study that seemingly originated from nowhere:

In one case, an article in the Journal of Integrative Oncology stated that a clinical study had shown the extract of propolis, a secretion that bees use to glue hives together, was more effective than chemotherapy in treating colorectal cancer. The study was fake and the authors were affiliated with a research center that doesn’t exist, Le Monde reported.

The publisher in question, OMICS, is currently under investigation by the Federal Trade Commission for fraud, according to The India Express. The Express also discovered that the 300 plus predatory publishers in India charge rates from $30 to $1,800 for article publication.

Though universities and research institutes warn scientists to steer clear of these publishers, many were shocked by their widespread, rapid growth. According to the report, Süddeutsche Zeitung and German broadcasters NDR and WDR found that over 5,000 German scientists alone have been published in such journals, to the chagrin of Nobel Prize winners like Ferid Murad, winner of the 1998 Nobel Prize in physiology or medicine, who said that the credibility of science is at stake.

Stefan Hell, who won the Nobel Prize for Chemistry in 2014, told ICIJ that the pseudo-science cultivated through predatory publishing is an issue that demands action, echoing the sentiments of other Nobel prizewinners and research groups. “If there is a system behind it,” Hall said, “and there are people who aren’t just duped by it but who take advantage of it, then it has to be shut down.”

*Correction: The original version of this story stated that the ICIJ and its members were directly involved in the investigation, when the ICIJ only facilitated the collaboration.