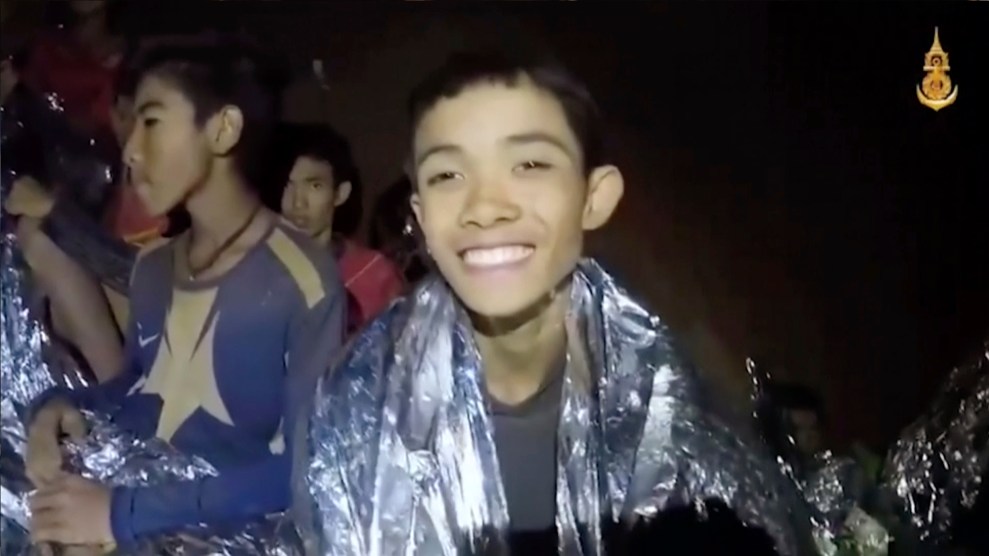 A boy smiles as a Thai Navy SEAL medic helps injured children inside a cave in northern Thailand, where a group of boys and their soccer coach were trapped.Royal Thai Navy Facebook Page/AP

The kids wrote about their favorite meals, their school obligations, and helping their parents at the store. The families told them they loved them, and managed to parent from afar: “Cover yourself with a blanket—the air is cold.”

The messages delivered between a soccer team trapped inside a flooded cave in Thailand and their relatives gave intimate insight into an 18-day ordeal that captured the world’s attention—and ended Tuesday when the last of a group of 12 boys and their coach were saved. The letters, posted by the Thai Navy SEALs and annotated by the BBC, showed both parents and children sharing messages of love and reassurance.

“Dad and mom are still waiting to arrange your birthday party,” said a letter addressed to Night, one of the boys. “Mom knows that you can do it. Mom and dad and everyone is giving you support.”

“Don’t worry, we’re all strong,” said one letter from the boys. “Once we’re out, we want to go home immediately. Teacher, don’t give us lots of homework!”

In another, a mother told her son not to worry: She’d be right in front of the cave when the boys got out.

With all members of the team now safe, the letters show the kids’ and their families’ resounding resilience, hope, and lightheartedness—even in the grimmest of circumstances.

Looking for a break from the political sniping? This week I’m focusing on big ideas that could help the world—and a few people who turned adversity into opportunity. There’s also good news about an amazing coral reef system. Read on! Recharge is a weekly newsletter full of stories that will energize your inner hellraiser. You can sign up at the bottom of the story.

Have a Recharge story of your own or a suggestion on how to make this column better? Fill out this form or send a note to me at recharge@motherjones.com. Have a great week ahead and make sure to sign up for the newsletter below.