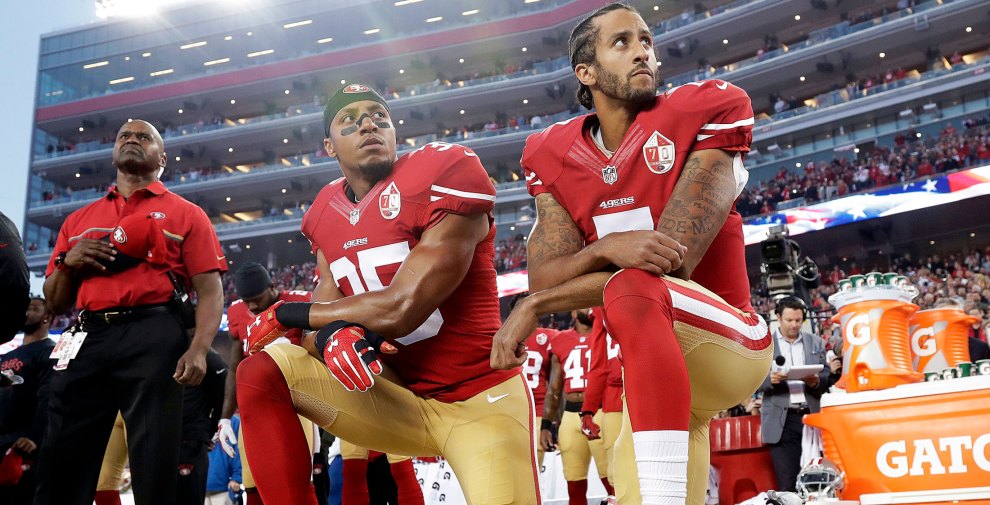 As the 2018 football season kicks off, the NFL has opted not to punish players who kneel during the national anthem. But that’s not stopping President Donald Trump from attacking players who don’t stand during the anthem.

On Sunday, Trump lobbed his latest Twitter tirade, writing, “If the players stood proudly for our Flag and Anthem, and it is all shown on broadcast, maybe ratings would come back?”

Wow, NFL first game ratings are way down over an already really bad last year comparison. Viewership declined 13%, the lowest in over a decade. If the players stood proudly for our Flag and Anthem, and it is all shown on broadcast, maybe ratings could come back? Otherwise worse!

The league’s first full day of games begins amid news that the league will not punish players who kneel during the anthem. According to ESPN, negotiations on the issue have stalled, and so the league has decided the best policy is no policy for the time being.

Back in May, the NFL’s owners announced a policy requiring all players and league personnel on the sideline to stand for the national anthem, but the policy gave them the option to stay in the locker room if they chose not to stand. That announcement caused the NFL Players Association to file a grievance against the league, arguing that the policy was decided without consultation from the players’ union and violated players’ rights to free speech.

Former San Francisco 49ers quarterback Colin Kaepernick began kneeling during the national anthem in 2016 as a way to protest the killing of unarmed black people by police in America. Kaepernick, once one of the NFL’s most electrifying stars, opted out of his contract with the rebuilding 49ers after that season ended and has been a free agent ever since.

Last October, Kaepernick filed a grievance against the NFL, arguing that team owners have conspired to keep him out of the league because of his silent protest and outspoken activism. Just before this season kicked off, Nike, the NFL’s official sponsor and a longtime marketer of rebellion against authority, announced that Kaepernick is the new face of its 30th-anniversary Just Do It ad campaign with the tag line “Believe in something, even if it means sacrificing everything.”

Believe in something, even if it means sacrificing everything. #JustDoIt pic.twitter.com/SRWkMIDdaO

Sales jumped 31 percent. Rebellion, it seems, is good for business.