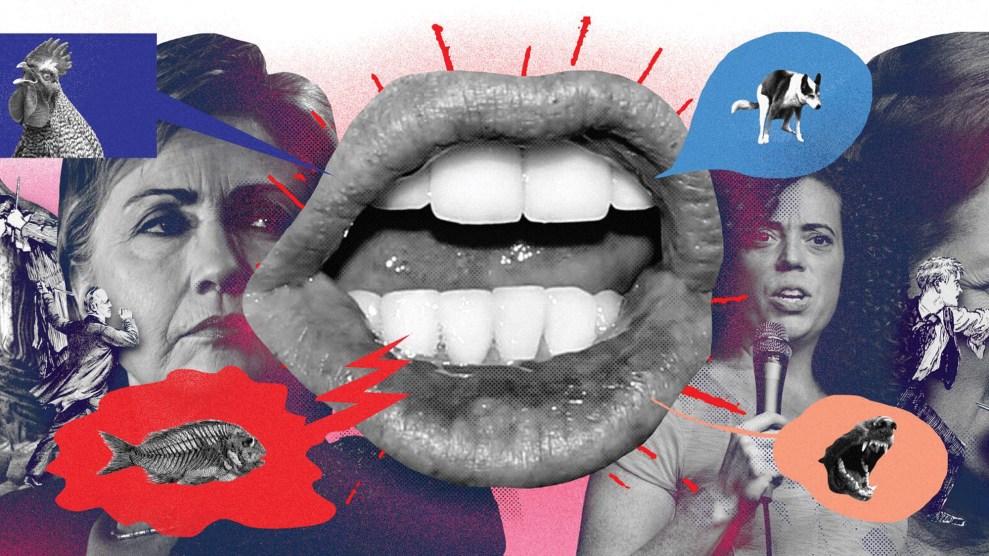 Since the dawn of Western culture, women have been mocked for their tone, bullied into staying quiet, or literally silenced. “More than that, as Homer has it, an integral part of growing up, as a man, is learning to take control of public utterance and to silence the female of the species,” historian Mary Beard notes in her talk “The Public Voice of Women.” President Donald Trump’s belittling of professor Christine Blasey Ford for speaking up about sexual assault is only the latest entry in a long history of this kind of manipulation.

In Homer’s The Odyssey, as Beard points out, Odysseus’ son Telemachus tells his mother, Penelope, to “Go back up into your quarters. Speech will be the business of men.”

After Caia Afrania, a Roman senator’s wife, insists she be allowed to represent others before the Roman magistrate—unheard of at the time—male writer Valerius Maximus describes her voice as an “unnatural yapping” and a “bark.”

If men’s voices all suddenly turned female, Greek orator Dio Chrysostom asks his audience, “would not that seem terrible and harder to bear than any plague?”

In Ovid’s Metamorphoses, Philomela, the princess of Athens, is raped by her sister’s husband, Tereus. He advises her to stay silent, and when she lashes out, he cuts out her tongue.

“What becometh a woman best, and first of al: Silence. What seconde: Silence,” Thomas Wilson writes in The Arte of Rhetorique.

Henry James warns that American women will turn the English language into a “generalised mumble or jumble, a tongueless slobber or snarl or whine,” like “the moo of a cow, the bray of the ass, and the bark of the dog.”

An associate at Westinghouse Broadcasting tells a reporter he would never let a woman hold forth on the air: “Their voices are flat or they are shrill, and they are usually pitched far too high to be modulated correctly.”

A male executive at New York radio station WJZ uses an unscientific survey to claim listeners favor male announcers over females by a 100-to-1 margin. Reporters keep citing the survey, and by 1929, writes historian Donna Halper, there are “fewer and fewer” women announcers.

Disney’s The Little Mermaid, in which Ariel gives up her voice to win over a man, heralds a trend: In the next five Disney princess films, male characters have three times as many lines as females do.

The average frequency of young women’s voices has dropped 23 hertz in 48 years, writes sociologist Anne Karpf, author of The Human Voice, in part because media coaches have trained female clients to deepen their registers.

After the New York Times names Jill Abramson as its executive editor, a New Yorker article describes her voice as “the equivalent of a nasal car honk” and says she has a “schoolteacherlike way of elongating words.” Less than three years later, Abramson is fired and replaced by Dean Baquet—reportedly, in part, because management considered her “pushy.”

Apple introduces Siri. Microsoft follows with Cortana, and Amazon with Alexa. “Female voices are seen, on average, as less intelligent than male voices,” notes Clifford Nass, an authority on computer-human interactions. But for traditionally gendered tasks such as secretarial duties, “female voices are easier to hear.”

A study of just 34 young women finds that two-thirds habitually use vocal fry, the lowest register of the voice—inspiring numerous articles about this supposed trend­.

This American Life airs a segment on listener complaints about its female hosts’ “excruciating” use of vocal fry. “It makes me angry because the biggest users of vocal fry traditionally have been men,” linguist Penny Eckert tells NPR. Indeed, TAL host Ira Glass says he’s never once received a complaint about his own vocal fry.

Trump assumes a high pitch to mock Clinton in a campaign speech: “Do you know the word ‘shrill’?” he shrieks. “She can be kind of sha-riiiiiiiilll.”

Wall Street Journal columnist Peggy Noonan likens Clinton to “a landlady yelling.” “She shouts,” journalist Bob Woodward tells MSNBC. “There is something unrelaxed about the way she is communicating.” Linguist Nic Subtirelu estimates that media outlets are more than twice as likely to describe women (as opposed to men) as “screeching” or “shrill,” and more than three times as likely to say a woman was “shrieking.”

Comedian Michelle Wolf won’t apologize for eviscerating press secretary Sarah Huckabee Sanders at the White House Correspondents’ Dinner. She certainly isn’t sorry for her tone: “You don’t get to choose your voice!” she argues in her HBO special. “I was never like, ‘Oh, you know what? I’ll take the voice that causes dogs to gather outside.'”

Psychology professor Christine Blasey Ford agrees to testify at a Senate Judiciary Committee hearing about her alleged sexual assault by Supreme Court nominee Brett Kavanaugh when they were teenagers. Ford tells the senators that Kavanaugh put his hand over her mouth to stifle her cries for help as he groped her: “This is what terrified me the most, and has had the most lasting impact on my life.” A few days later, at a rally in Mississippi, Trump ridicules Ford’s recollections and declares that men are under siege in the face of the #MeToo movement. “Think of your son!” he exclaims. “Think of your husband!”