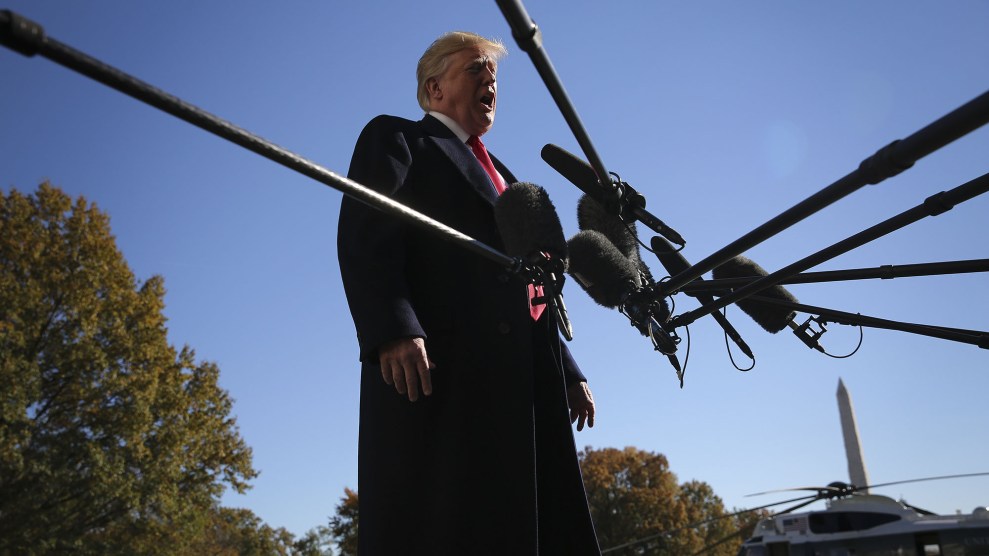 United States President Donald J. Trump talks to reporters before boarding Marine One on the South Lawn of the White House on November 4, 2018 in Washington, DC.Oliver Contreras/CNP/ZUMA

The “magazine” was mostly laughable with its bad cartoons and red accent fonts that wouldn’t have looked out of place in a fifth-grade Halloween party flyer. But it was also a perfect metaphor for the 2018 election, and the fight that we’re in for the next two years.

The 40-page hunk of glossy paper was campaign literature for Devin Nunes, the Republican congressman now best known for using the House probe of Russian election interference to peddle conspiracy theories about an FBI plot against Donald Trump. Thanks to that notoriety, Nunes—who in 2016 was reelected with 68 percent of the vote—has faced an unusually strong challenge this year. But the campaign he chose to run was not really against the Democrat, Andrew Janz. It was against the hometown newspaper.

“The Fresno Bees” reads the front page of the mailer sent to homes throughout the district, a rural stretch of dairy farms and almond groves in California’s Central Valley. On the cover, intoxicated bees waving pitchers of Kool-Aid cavort on a sinking ship as “Resist” flyers and a “Socialism” poster float on the waves. Inside, you learn the “dirty little secrets of the Valley’s propaganda machine,” a.k.a. the Bee’s newsroom. They include the paper (which up to this point had endorsed Nunes in every race of his 15-year political career) daring to expose the congressman’s ties to a winery that organized a party where attendees allegedly drew straws to allocate sex workers. Four whole pages are devoted to the temerity of reporters showing up at Nunes’ district offices.

Politicians have used media as a punching bag forever. But what Republicans did in 2018—and what Trump has built his political career on—is different. They aim not to influence or spin the media, but to make it The Enemy. They want this election to be a referendum on journalism.

That’s a chilling sentence to write, because no journalist can be confident that we’d win such a contest. Our profession is hardly popular (cue polls ranking us right between “bankers” and “state officeholders” for honesty and ethical standards), and the president has bet his political existence on whipping suspicion into hateful contempt. In his callous response to mass murder last week, he bet that even people who dislike his tone will dislike us even more.

This is the question for journalists: Do we continue to let ourselves be used in a campaign to destroy the principles that allow a free press to exist?

Trump wants to prove that demagoguery is stronger than facts and accountability. And the brutal irony is that journalism continues to help him do it.

Perhaps never has this been more apparent than in the past two weeks, as the president set out to test how low you can go with racist fearmongering, and to what extent the press will let you get away with it. It took just a couple of tweets about the migrant caravan to launch a blitz of front-page stories, cable segments, and nonstop video of a trek that was neither new nor very close to the United States. A Stephen Miller dream come true. 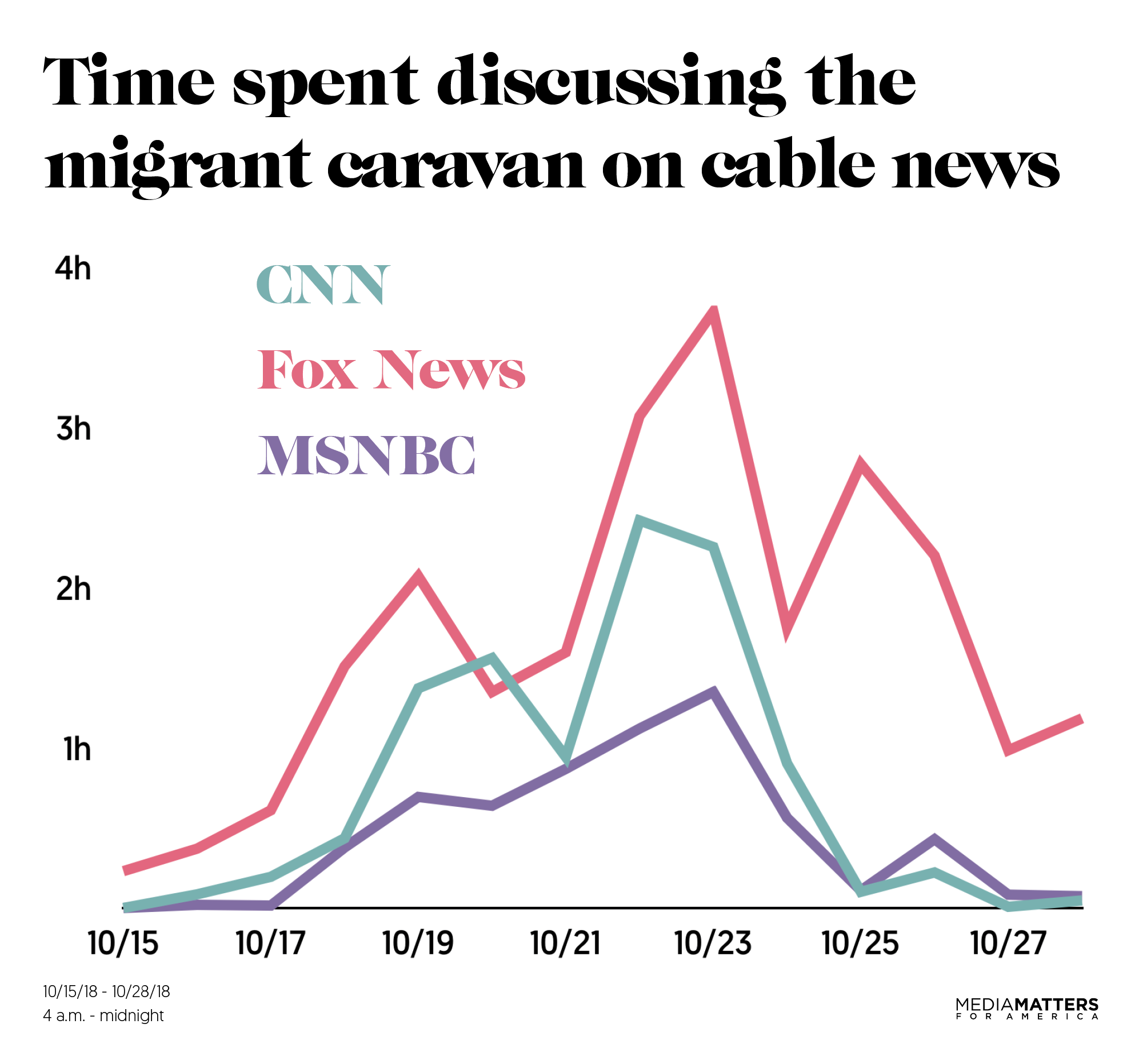 “The president needs a dependable enemy,” wrote Washington Post media columnist Margaret Sullivan, “as he proves constantly in his harsh rhetoric against the news media. But once again, that despised enemy manages to help him at every turn.”

The more Trump ratchets up the volume, the more the press does his work for him. The Associated Press referred to the caravan as an “army”; talking heads repeated over and over his claim about “unknown Middle Easterners” in the group. And let’s not talk about the birthright citizenship stunt, starting with the embarrassing moment Axios‘ Jonathan Swan beamed as the president handed him a steaming pile of scoop.

Do we still not know the name of this game? To echo a lie (or “falsehood,” if you prefer), with nothing more than a timid notation that it “lacks evidence,” is to carry water for the liar. The hours and hours of airtime devoted to birthright citizenship were hours, a week before Election Day, that didn’t go to other issues. “It’s clearly working,” a “source close to the White House” told CNN’s Jim Acosta when asked about the racist ad Trump released as his closing argument. “We are all talking about it and not health care.”

It’s no coincidence that the media and immigrants were Trump’s biggest themes in these closing weeks: They have been his go-to villains from the moment he rolled off the golden escalator into a speech about “rapists” and criminals. They are who he turns to when he’s cornered, when he needs a quick high for his base.

We know by now what Trump does when he runs against you. He doesn’t nitpick your ideas or challenge your arguments. He aims to destroy you. He pushes lies and conspiracy theories, promotes violence, encourages foreign adversaries to come after you.

So this is the question for journalists to confront for the next two years: Do we continue to let ourselves be used in a campaign to destroy the principles that allow a free press to exist?

There have been signs of media companies finding their spine. Last week CNN’s PR office bluntly tweeted that the president’s closing campaign ad “is racist” and noted that the network had declined to air it. But these moments have been sporadic. They have not grown into a systematic reckoning.

Such a reckoning wouldn’t mean refusing to cover Trump’s provocations. It would mean covering them more fully, and doing exactly what he despises: putting his lies in context, spelling out and challenging the narrative he is trying to craft, investigating the stories he’s trying to bury.

Journalists are not going to convert Trump’s most fervent acolytes. But we can do a better job for the majority of Americans who—no matter how much the White House would have you believe otherwise—trust the media more than they do the president. (Just as a majority wants America to remain a nation of immigrants.)

Like local papers everywhere, the Fresno Bee has been through some tough times. Its newsroom is down to 19 reporters covering a region twice the size of New Jersey. But when Nunes dropped his attack mailer, columnist Marek Warszawski didn’t mince words. “No matter what you tell people, no matter the falsehoods you plant, we’re not going anywhere. We’re not backing down.”

“The Fresno Bee was here before you, Devin,” he closed, “and we’ll still be here, long after you’ve retired from politics.” Journalism may not have chosen this fight, but we’re in it, and we better see it through.