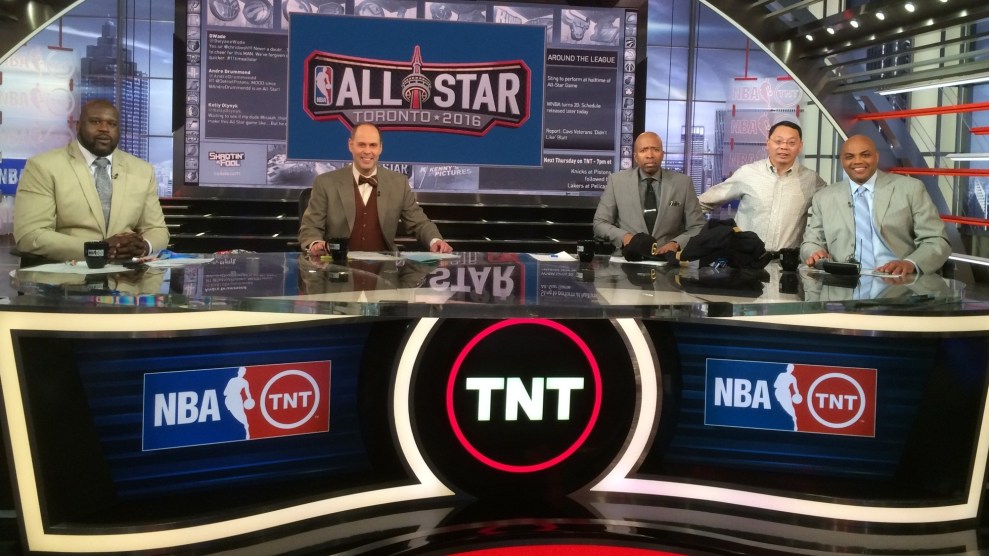 Charles Barkley, right, and Lin Wang, second from right, on the set of TNT’s NBA postgame show, "Inside the NBA."Courtesy of Shirley Wang

Lin Wang was known for talking rubbish at times, but he was right about having a good friend in Charles Barkley, the retired NBA star. A cat litter scientist, Wang struck up the unlikeliest of friendships with Barkley—and both came to each other’s side when it mattered.

When Barkley’s mother died two years ago, for instance, Wang flew from Iowa to Alabama for the funeral. “Everybody’s like, ‘Who’s the Asian dude over there?’ I just started laughing,” Barkley told Wang’s daughter, Shirley, who produced this intensely personal radio story for NPR’s Only a Game. “I said, ‘That’s my boy, Lin.’ They’re like, ‘How do you know him?’ I said, ‘It’s a long story.'”

It’s an incredible story, too, that began when Wang spotted Barkley in a Sacramento, California, hotel bar. One drink turned into a meal, and dinners for two days after that, and get-togethers in other towns. They talked about pride in their kids and difficult upbringings, and they found they had, surprisingly, a lot in common. One hope they shared: If they worked hard enough, the color of their skin wouldn’t matter.

Their friendship continued until the very end, when Lin contracted terminal cancer. Last June, as Shirley and her family sat at his funeral service at a house outside Iowa City, a 6-foot-6-inch friend of her father’s walked in—and comforted her.

A raft of readers praised and comforted Shirley after the 14-minute story aired last Saturday. She tells me she has been humbled by the outpouring. The recent Tufts University grad had taken a semester off school and cut short an internship to be with her father, and now she feels like he left her the gift of his spirit and his story. “I feel like I can dream big now,” she said.

We want to hear from you! Let us know your favorite Recharge-style story and why—whether it was about someone helping others, justice prevailing, or an action that inspired you. Even better: Tell us about something you did as a result of these stories. Email me at recharge@motherjones.com or fill out the form below.