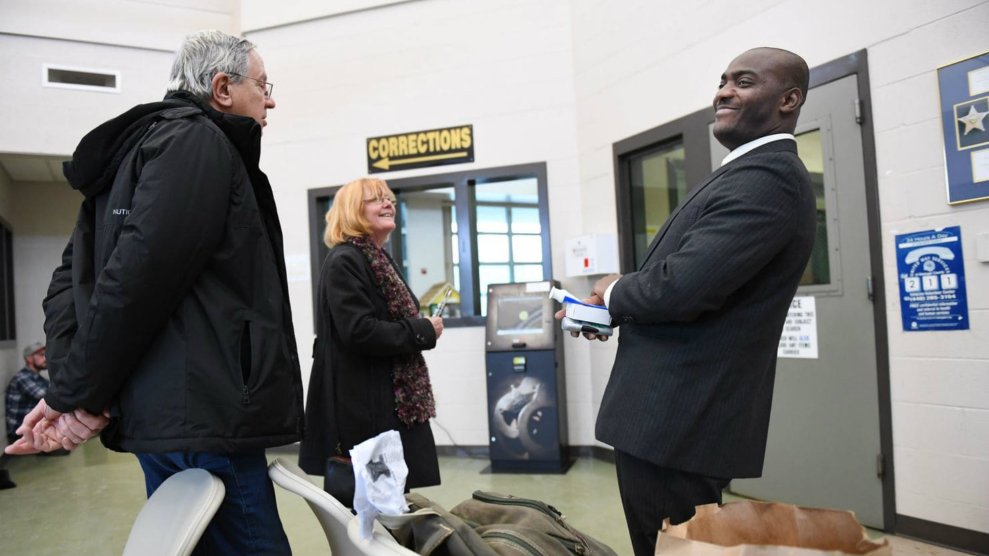 Gary Benjamin and Melody Hart with Ansly Damus, a Haitian asylum-seeker who was freed after two years in detention.Matt McClain/The Washington Post

After a gang beat him for criticizing a local politician, Ansly Damus fled Haiti. The former teacher came to the United States seeking asylum—but instead, immigration officials put him in a windowless cell in an Ohio jail for almost two years.

A judge had granted Damus asylum twice, but officials at Immigration and Customs Enforcement kept appealing the decision, leaving Damus locked in jail. He was rarely allowed to step outside.

Though Damus’ story is heartbreaking, it’s also one that involves persistence, courage, and kindness. When a local couple heard about his case through an immigration activist, they immediately offered to help, agreeing to house Damus so he could get paroled. “We are empty nesters and have a large home,” Gary Benjamin and Melody Hart wrote in a letter to ICE.

Benjamin and Hart worked to keep Damus’ spirits up. Nearly every week, they visited him in jail and sent him letters. When the jail refused to allow him to receive books, they made photocopies and sent him 20 pages at a time—the maximum length allowed, according to Mother Jones. Another supporter relayed his local phone calls to his wife and family in Haiti so they could hear him—international calls and letters were not allowed.

On November 30, Damus and his lawyers won his freedom. A federal judge ordered Damus to be released while the case continued. Upon entering Hart and Benjamin’s home, Damus said a prayer.

“I said thank you,” Damus told the couple, according to the Washington Post. “Thank you for taking me.”

Welcome to Recharge, a collection of stories of people who help others, fight for justice, and try to make the world better. Sign up at the bottom of the story.