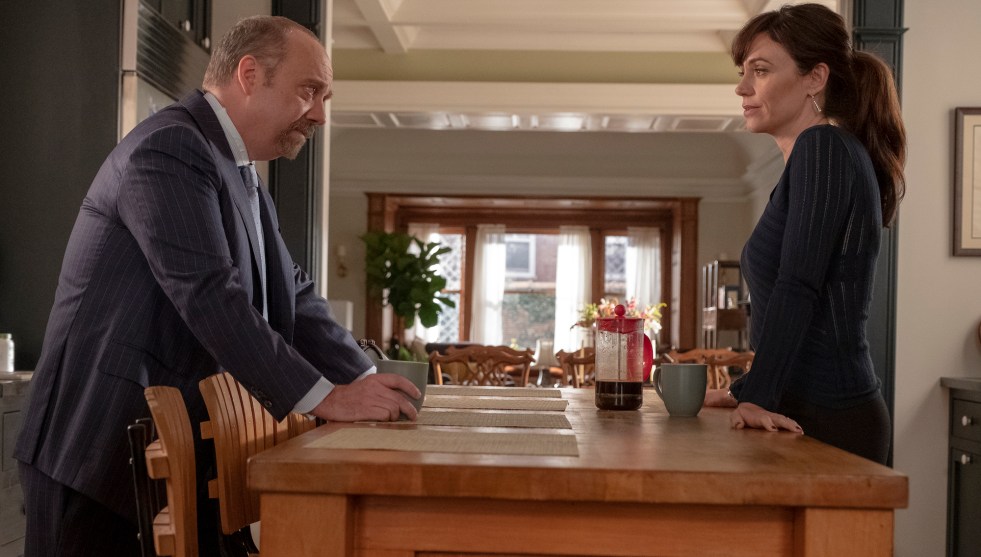 Billionaires, Saudi investors, political favor-trading —it sounds a lot like the basis of a Mother Jones article on any given day under the Trump administration. But in fact, it’s the logline for the season premiere of Showtime’s Billions, a surprise hit that is as comfortable being part of the Golden Age of television as it is commenting on a politically turbulent time.

The show stars Paul Giamatti as Chuck Rhoades, former US Attorney for Southern District of New York, and Damien Lewis as Bobby Axelrod, an unorthodox, up-from-his-bootstraps-sort-of hedge fund manager at Axe Capital. They’re joined by Maggie Siff as Wendy Rhoades, wife to Chuck and psychoanalyst at Axelrod’s company; she further complicates their relationship (and often calls the shots for them both). The drama, which was loosely based on the legal battle between Preet Bharara, a former US attorney for the same district Rhoades serves in Billions, and billionaire Steve Cohen, a hedge fund manager who escaped indictment despite being at the heart of a massive insider trading scandals, has evolved over four seasons into must-watch television that evokes the politics of today without the didactic morality of, say, an Aaron Sorkin venture.  The show is smart, sexy, and dark, and vest-wearing finance bros and media hipsters alike count themselves among its fans.

Mother Jones called up co-creators Brian Koppelman and David Levien in advance of season four to discuss America’s fascination with the rich and powerful and how they keep their show fresh in the mercurial age of Trump.

Mother Jones:  Last season, you really leaned into using the shifting politics in Washington to change up power dynamics between Chuck and Axe. How do you approach incorporating those realities into the show?

David Levien: We felt that it was really important to reflect a change had happened because obviously, it was such huge national news, and it would be hard to act like the world of Billions was not affected. That particular job [of US Attorney for the Southern District of New York] is a presidential appointment, so often, there’s going to be a turnover there.

But we don’t try to chase the headlines. We pay attention a lot to the news and the climate. A lot of the stories that we laid in seem to come true after we made the episodes, which was really sort of surprising and really gratifying.

Brian Koppelman: It’s definitely something that affects the show. That stuff that takes place in the embassy [in the premiere], we shot that long before the [Jamal Khashoggi murder]. Same thing with the way that Trump and Michael Cohen got their gun permits; it’s clear that came about through favor-trading.

At the beginning of the show, we tried to examine why characteristics like verbal acuity, charisma, power, started to stand in for actual clarity of character. Trump was a big-time reality star, and there does seem to be this disconnect between what New Yorkers knew and thought about him and what the world did, and we were interested in why people react particularly to men of wealth in the way that they do. The show has always been looking at that.

MJ: Are there other ways you keep the high stakes of the show without going over the top?

BK: As the season deepens, the drama shows up through character revelation. There’s all this talk in the last couple weeks about the Overton window, which is the title of the fourth episode. We’re really fascinated by how topics of conversation move. In this season, I think you’ll see the show anticipating what happened with Jeff Bezos and reacting to the way people in positions of power are willing to just talk about stuff that even a year ago would have seemed to torpedo their whole lives.

MJ: Why do you think that the show resonates with such a wide audience?

BK: We don’t even allow ourselves to think about the audience. Really, the show functions as a Rorschach test. We have these actors who are spectacular at delivering the characters, and so people become attached to these actors who can portray people that are intelligent and sharp and funny.

MJ: Speaking of strong acting, Asia Dillon has gotten a lot of attention for their performance as the first non-binary character on a major television show. How did the character of Taylor Mason come about?

DL: That was another one of those cases of paying attention to the way things were changing around us and creating a character that then became something that was almost like a newsworthy topic. A couple of years back, Brian came in, he had teenage kids at that time, and they had come home from school and said, at the beginning of each semester, the teachers asked us if we want to announce our pronouns, and if anything’s changed, or if we want to declare ourselves in any certain way.

All the older people in the writers’ room were like, “What is that?” And then a younger guy said, “Yeah, I was just at a benefit, and I sat next to a person who refers to themselves as they.” That person came in and we met with them. It’s been fascinating to us. It seemed like putting somebody who was incredibly intelligent—and much like Bobby Axelrod in many ways—but presented so differently, if you put a person like that into the hedge fund world, very interesting things would happen.

MJ: As a viewer, it seems increasingly difficult to figure out who on the show is the “good guy.” In fact, in the first episode this season, Chuck says about a character, “He’s exactly the opposite of what he seems.” Axe replies, “Who isn’t these days?”

Do you feel like the shifting morality of the characters says something about the way power influences people?

BK:  A clear-eyed view of how power and money affect people, maybe? But the thing about a long-running television series is the novelistic aspect of it. Now you’re in the middle chapters of it, there’s a temptation sometimes to win. In the middle chapters, it has to feel pretty dire. We have to hope that some of those tested will find a way to transcend.

I wouldn’t say we’ve landed on them being defeated by all of this stuff, but we certainly can’t look around the world and see many who aren’t tested.