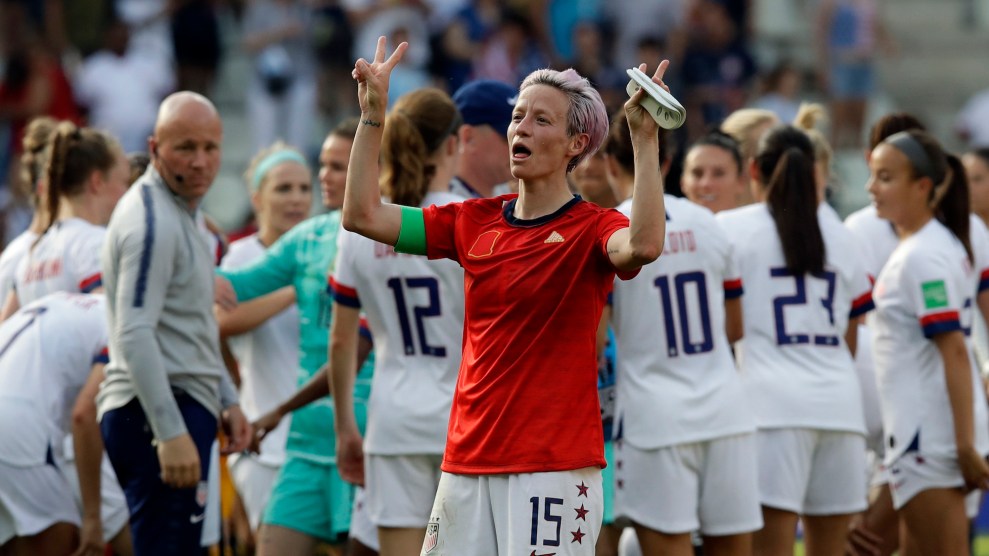 On Tuesday, US women’s soccer star and team co-captain Megan Rapinoe was asked by a reporter whether she would celebrate a victory at the Oval Office should her team win the World Cup this year. Rapinoe responded: “I’m not going to the fucking White House.”

President Donald Trump unleashed a series of tweets on Wednesday chastising Rapinoe for disrespecting “our Country, the White House or our Flag” and inviting the team to the White House. “Megan should WIN first before she TALKS!” he tweeted.

The soccer star later doubled down on her remarks, though she apologized for cursing. “Considering how much time and effort and pride we take in the platform that we have, and using it for good, and for leaving the game in a better place and hopefully the world in a better place—I don’t think that I would want to go,” Rapinoe said at a press conference. “I would encourage my teammates to think hard about lending that platform, or having that co-opted by an administration that doesn’t feel the same way and fight for the same things we fight for.”

Rapinoe was also the first white or female athlete to take a knee during the national anthem in support of football player Colin Kaepernick’s protest of America’s systemic oppression of people of color. She is not singing the anthem during this year’s World Cup. And she has been outspoken on LGBTQ issues and social change.

But even if she wouldn’t visit Trump, that doesn’t mean Rapinoe is planning to steer clear of celebrating in high places. After she scored two goals to lead the national women’s soccer team to victory in the quarterfinals over France on Friday, a different DC celebrity extended an invitation for a visit.

“It may not be the White House,” tweeted Rep. Alexandria Ocasio-Cortez, but Rapinoe and the women’s national soccer team were welcome to tour the House of Representatives “anytime they’d like.”

Q: “Are you excited about going to the White House?”

Megan Rapinoe: “I’m not going to the fucking White House.”pic.twitter.com/OosAQMjYsh