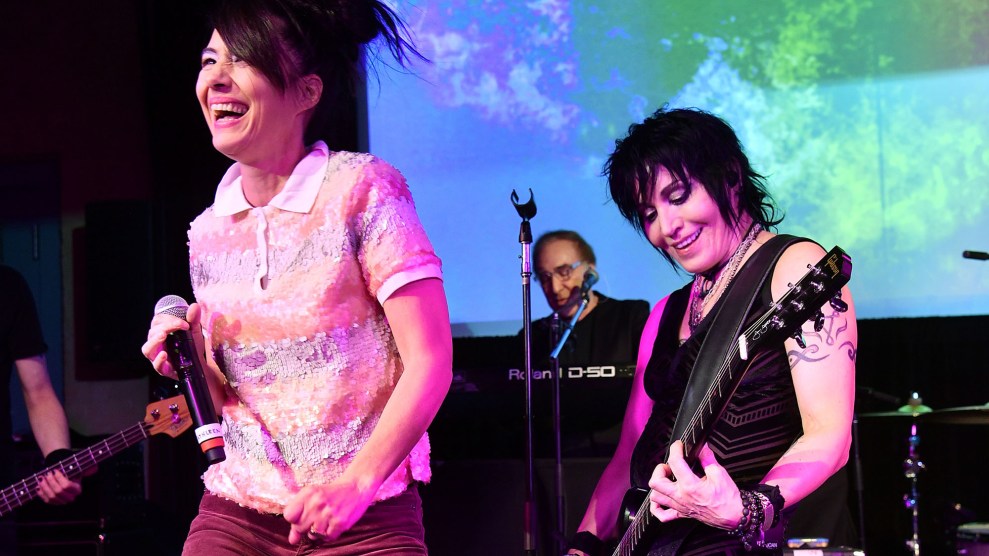 Less than a month after a spate of state legislatures voted to enact sweeping abortion restrictions, 3,000 people, mostly women, swarmed Kings Theatre in Brooklyn to bang their heads, shake their hips, and scream. It wasn’t a protest, but the audience was angry. Bikini Kill, one of the preeminent feminist punk bands of the riot grrrl movement of the 1990s, was playing one of four sold-out shows in New York—their first since they broke up in 1997, the year that I was born.

Singer Kathleen Hanna and her band filled the venue, an august 1929 movie palace, with raucous noise that seemed more fitting for a garage or an unfinished basement. The band that coined the motto “We want revolution girl-style now!” had returned in all its loud, angry feminist glory. Women’s ire was suddenly justified, and riot grrrl was back.

Standing in the audience, I recalled how nostalgic Bikini Kill had sounded when I listened to them in high school. When I first heard them, they sexism they sang of seemed outdated, a thing of the past, a problem that had been solved, at least in the United States. But despite the #MeToo movement, misogyny still thrives. Everyone in the audience understood why women were angry, even if they couldn’t discern the words that Hanna screamed into her microphone.

Between songs, Hanna, wearing a sparkly pink dress, spoke to the audience about feminism. At one point, she said that empathy was a superpower that could help women survive attacks on their rights.

The only alternative to tears—for Hanna and for the audience—was music.

Toward the end of the show, the band performed its most famous song, “Rebel Girl,” and Hanna invited onstage a feminist from another generation: Joan Jett. I remembered a photo I had seen of Joan Jett’s jacket from the eighties adorned with pins that said “KEEP ABORTION LEGAL” and “If she says NO It’s Rape.” There was the sense that these issues are never settled. Old feminists have to keep fighting battles that should have ended long ago. Sometimes all we can do is dance and yell.

Outside the venue after the show, people crowded on the sidewalk, chatting and smoking cigarettes, relieved. Under Trump, riot grrrl is catharsis.

Bikini Kill will play two more concerts in London on June 10 and 11.