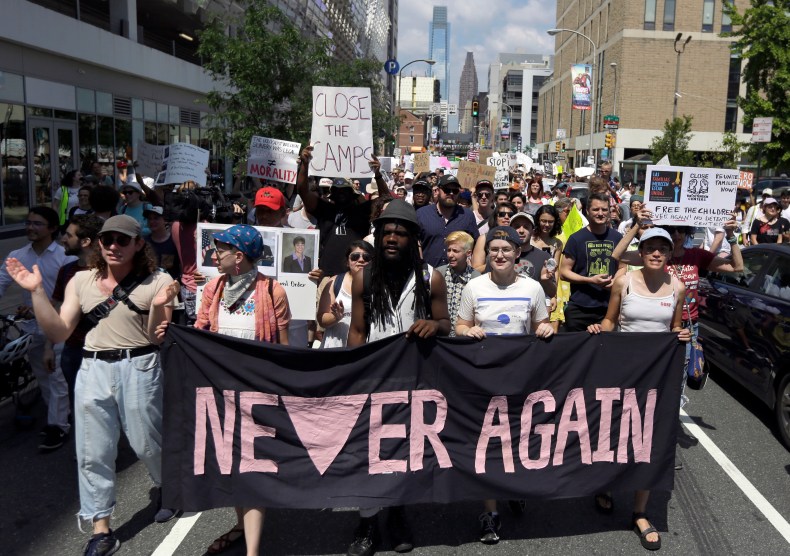 Never again. That’s the two-word message these young Jewish activists were told growing up. And that’s why they’re working to stop the targeting and imprisonment of migrant kids in US detention camps.

Only a month old, the Never Again Action movement has launched at least seven protests against Immigration and Customs Enforcement nationwide, including this week in Washington, DC.

The organization is growing at a dizzying speed, said Evan Feldberg-Bannatyne, a 21-year-old student at Earlham College in Indiana, who runs a team that handles the group’s sponsorships, budgeting, and reimbursements.

“This is really how I practice my Judaism—through social justice,” he said.

Brandon Mond, 25, said young Jews of conscience have no other choice than to stand up for persecuted people.

“This is authoritarianism—we’ve seen this before,” Mond told BuzzFeed News. “This is a state agency that’s able to just roll around the streets and abduct people at random. My whole life I’ve been told these stories by my community that say that’s a bad sign, so those alarms are going off in my head.”

Other groups are joining the cause. We reported recently on Japanese American detention camp survivors rallying outside an Oklahoma base that is scheduled to become a child detention camp. On Saturday, Buddhist priests and Native Americans joined them in protest.

Two days earlier, 70 Catholic nuns and parishioners were arrested in Congress in a protest against the detention centers. (BuzzFeed News)

I’ll leave you with this stunning image from Capitol Reef National Park in south-central Utah via the Interior Department’s Twitter account. Have a great week ahead!