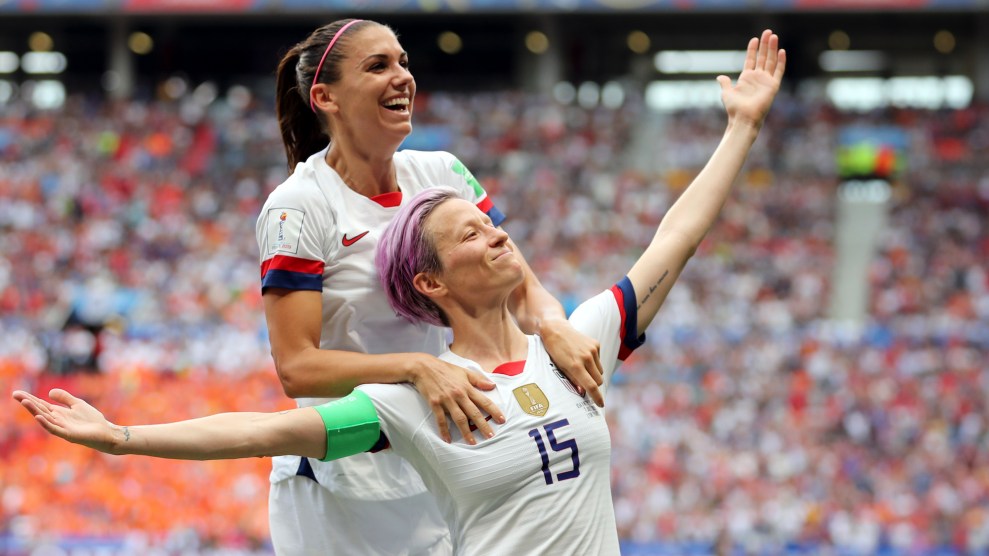 The US women’s soccer team just dominated its World Cup final with a 2-0 victory over the Netherlands. And yet its players still aren’t paid as much as America’s male players—who have yet to win a World Cup, much less four. And the pay gap persists at the international level: The 2019 Women’s World Cup offered players $30 million in prize money; the 2018 Men’s World Cup handed out $400 million.

Members of the women’s team have been in a lengthy standoff with the US Soccer Federation over their lower pay. In 2016, five team members filed a complaint with the Equal Employment Opportunity Commission alleging wage discrimination. The team eventually reached a collective agreement for higher pay. However, in March, team members filed a federal lawsuit against the US Soccer Federation, alleging that it had engaged in “intentional gender discrimination” by continuing to pay women less than men. The lawsuit alleges that a federation representative told players that “market realities are such that the women do not deserve to be paid equally to the men.”

As the women’s team celebrated its victory today, its many fans joined the call to “pay them.” The stadium in Lyon, France, erupted into chants of “equal pay” as the president of FIFA, the world soccer federation, took the stage.

There is now a deafening "EQUAL PAY" chant thundering through the stadium in Lyon.

Congratulations to the #USWNT on their 4th World Cup win! These athletes have brought more attention, support, & pride to women’s sport than perhaps any other team in history. It is long past time to pay them what they rightly deserve. 🇺🇸🏆🏆🏆🏆 #USAvNED #WorldCupfinal #EqualPay

4 years ago I saw the #uswnt destroy a final in a bar so packed there wasn't room to stand. It was mid-afternoon.

Today I'm watching them in a bar so packed, again, there isn't room to stand.

At this point we shouldn’t even be asking for #EqualPay for the #USWMNT – we should demand they be paid at least twice as much 😉 https://t.co/VXITg24UB3