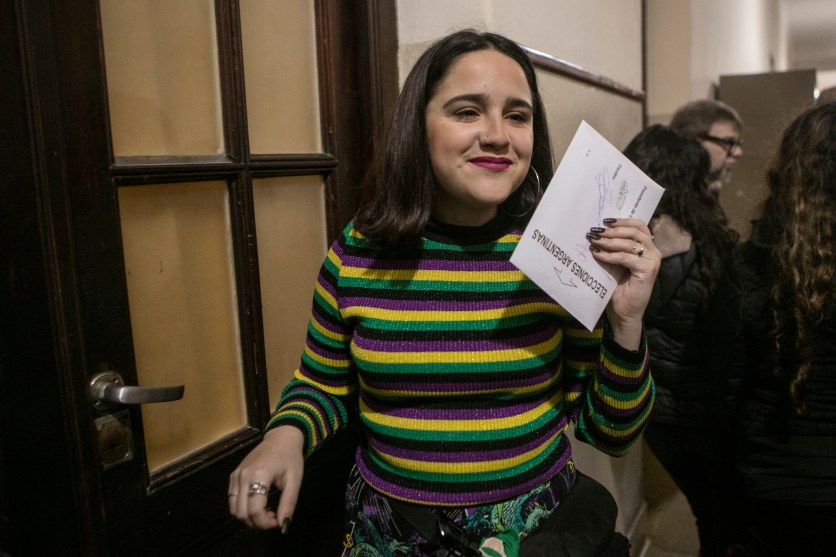 Ofelia Fernández, an uncompromising student leader, has captured the imagination of people beyond her native Argentina. On Monday, she won her campaign for the Buenos Aires legislature, becoming the youngest lawmaker in the city’s history.

“Is the political system ready for us to enter?” the Washington Post quoted 19-year-old Fernández as asking hordes of young supporters at a campaign event several weeks ago. “The answer is, ‘I don’t care because we will force our way in.’”

Fernández, already a high school student body president and a courageous leader of Argentina’s movement to legalize abortion, became an internet phenomenon last year with a detailed, authoritative rebuke of a pundit who tried to dismiss her as a chiquita (little girl) on TV.

Fernández, with more than 338,000 Instagram followers, says she represents thousands of young women who took to the streets to legalize women’s right to choose. The effort failed in Argentina’s Senate.

Earlier this month, Fernández told a gathering of 200,000 women in the Argentine city of La Plata that women candidates, if elected, would change the country. “With sensitivity, sisterhood, and gathering together, we’re going to knock it all down,” Foreign Policy quoted her as saying.

On Monday, she sent her gratitude to supporters. “We all won,” she tweeted.

Not stopping now. Mirza Dinnayi has risked his life rescuing fellow Yazidis from ISIS. He has kept it up even after one mission in Syria in which the helicopter he was riding in crashed. Dinnayi, one of three humanitarians to win the Aurora Prize for Awakening Humanity, said he had no other choice: “Wherever the victims are, if you know about them and you say, ‘I don’t care,’ you will forever feel guilty.” (Washington Post)

Overdue. Settlers stole the Wiyot Tribe’s land, then massacred scores of adults and children. Last week, after 159 years, their land was deeded back to them by the Northern California city of Eureka. “It’s been far too long,” said City Council member Kim Bergel. A tribal administrator credited her community’s resilience in pressing for this deal. “The Wiyot people never gave up the dream,” said Michelle Vassel. Thanks for the tip, Julie Wick. (Associated Press)

Everybody should eat. As a mother of six, Champale Anderson already has enough lunches to make. So each day she makes 100 more—PB&J with a varying assortment of snacks—and puts the meals in bags. Any child who knocks on her door gets one. “I’m just trying to help the kids that don’t have enough at home or just hungry after school,” said Anderson, of St. Louis. She supports part of her operation through a GoFundMe page and hopes to grow it to feed more hungry kids. Thanks to my colleague Sam Van Pykeren for suggesting this story. (Because of Them We Can)

Recharge salutes: The Dutch city of Utrecht, which created havens for bees by putting “green roofs” atop 316 bus stops; Boston Dr. Riley Bove, who helped find a likely cause to a rare neurological condition after her 4-year-old became afflicted with it; the Richland Source, a locally owned news agency, which won four national awards on Friday for revitalizing community news and engagement in north-central Ohio; and a Jordanian women’s soccer team, which temporarily stopped a match to help shield an opposing player whose hijab had started to fall.

When a soccer player's hijab started falling off to reveal her hair, her opponents gathered around to provide cover while she fixed it. (via @JordanFA) pic.twitter.com/rSUxM0S5Xe

I’ll leave you with this image of the full flush of autumn at Glacier National Park in Montana, thanks to the Interior Department’s Twitter feed. Happy Halloween, have a good week ahead, and thanks for reading!

Stop the car! 🍂 That's the proper response when coming across an enchanting fall scene like this @GlacierNPS. Pic by Robert Strain (https://t.co/7u0uZGuWtK) #Montana pic.twitter.com/2yduIUFP2u