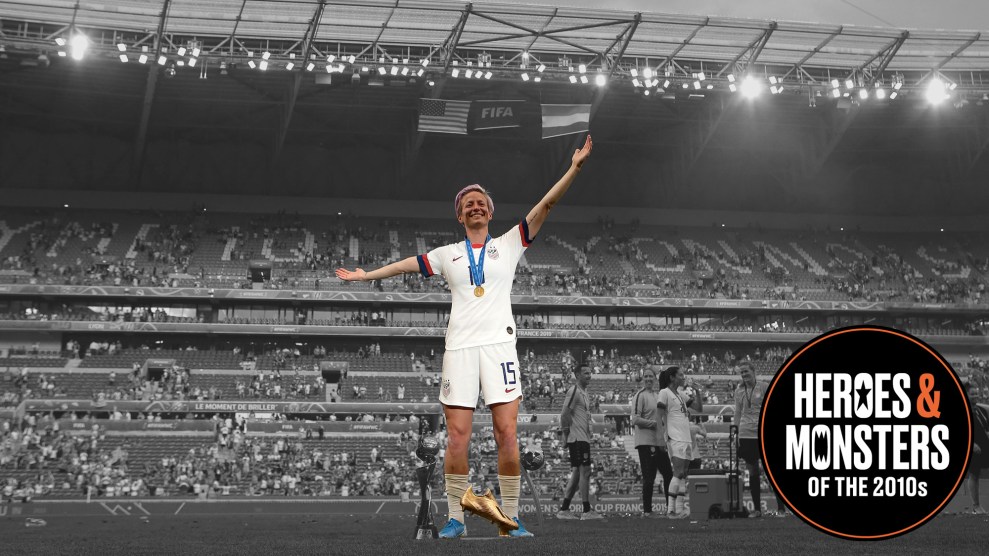 Confession: I spent a good amount of time this year checking out the photos in Sports Illustrated’s swimsuit edition. It’s pretty far outside the realm of my usual pastimes, but this issue featured members of the US Women’s National Soccer Team. And staring at pictures of Megan Rapinoe’s abs (I mean, have you seen them?) was really the respite from all things Bad and Sad that I needed this year.

For fans of women’s soccer—which, if you’re an American watching soccer, you should be—Rapinoe has long been the scruffy, nimble-with-the-ball outside midfielder. This year, she also became a crossover celebrity. It all started back in March, when, as the national team’s co-captain alongside Alex Morgan, Rapinoe became the face of the team’s gender discrimination lawsuit against the US Soccer Federation.

“We very much believe it is our responsibility, not only for our team and for future US players, but for players around the world—and frankly women all around the world—to feel like they have an ally in standing up for themselves, and fighting for what they believe in, and fighting for what they deserve and for what they feel like they have earned,” Rapinoe said of the suit, which demands that the Federation pay the women’s team on par with the men’s.

Rapinoe and the team went on to show the world they had indeed earned it. In June, they opened the 2019 World Cup with a 13-0 win over Thailand, the most lopsided results in World Cup history, men’s or women’s (Morgan scored five of the team’s goals, Rapinoe scored one). Impressive, yes. But what came next ultimately rocketed her to fame. When their gold medal seemed inevitable, a reporter asked Rapinoe whether she was “excited to go to the White House” to celebrate her win.

“I’m not going to the fucking White House,” she replied, in a video that’s now been viewed almost 13 million times.

“I’m not going to the fucking White House.” – @mPinoe pic.twitter.com/sz1ADG2WdT

Trump, of course, took the bait, tweeting that “Megan should WIN before she TALKS.” The team went on to win the tournament undefeated. Rapinoe scored some of the team’s key points: both goals in a 2-1 win over France in the quarter-finals and the first of two goals in their final game win against the Netherlands. The gold medal was their 4th; the men’s team has never won a World Cup.

Do you really need any more reasons to love Megan Rapinoe? Here are a few: