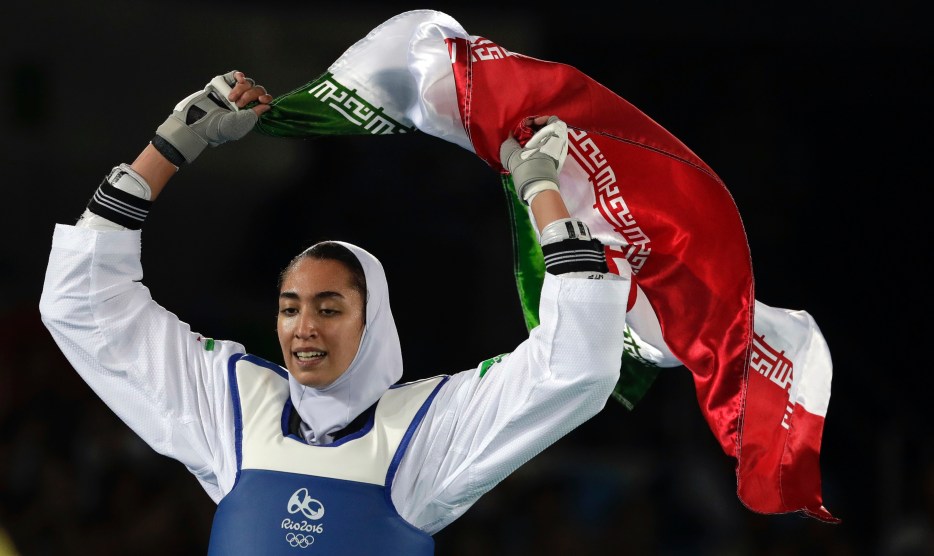 Kimia Alizadeh, the first woman from Iran to win an Olympic medal, before announcing her decision to defect in protest.Andrew Medichini/AP

They told her where to go, what to wear, how to act, what to say. Iran’s only female Olympic medalist has said enough is enough: She’s defected in protest.

“My troubled spirit does not fit into your dirty economic channels and tight political lobbies,” said Kimia Alizadeh, announcing her defection. “I have no other wish except for taekwondo, security, and a happy and healthy life.” In her weekend announcement to her 400,000-plus followers on Instagram, Alizadeh, 21, included an image of her from the 2016 Summer Olympics, where she became Iran’s first woman to win an Olympic medal.

She also spoke of “oppressed people of Iran” and the “obligatory veil” required of women. The New York Times quoted reports that she has moved to the Netherlands and hopes to compete in the 2020 Olympics for another country.

Alizadeh said she was looking forward to not being used as a “tool” by Tehran’s authoritarian government. “They took me wherever they wanted,” she wrote. “Whatever they said, I wore. Every sentence they ordered, I repeated.” She said she “didn’t want to sit at the table of hypocrisy, lies, injustice, and flattery.”

A (Michelin) star. Mariya Russell, a fledgling chef in Charleston, South Carolina, moved back to Chicago after her father died. She ended up running the kitchen at Kumiko, a cocktail bar, and at Kikko, in its basement, which offers seven-course omakase dinners. Two days shy of her 30th birthday, Russell became the first Black woman ever to be awarded a Michelin star. After returning to Chicago, Russell had taken the only position available, a back server, and had worked her way up to sous chef and then executive chef. Among Russell’s standouts: her agedashi tofu and her Japanese milk bread. (Eater)

Saving lives. The shutdown of hundreds of coal-fired power plants over the past decade has saved more than 26,000 American lives, a new study says. The move saved the planet more than 300 million tons of carbon dioxide, according to Nature Sustainability. Levels of nose- and throat-irritating nitrogen dioxide? That went down 60 percent. Sulfur dioxide? Down 80 percent. (Guardian)

Students sue to stop climate change. By failing to develop a plan on climate change, Florida officials are violating the constitutional rights of teenagers and putting their future at risk, according to a group of Florida students. The students demand that the state develop an energy plan that won’t make climate change worse. “The time has come for real action,’’ says one plaintiff, Delaney Reynolds. The students say Florida is the second-highest emitter of carbon dioxide in the country, and third in energy consumption. (Tampa Bay Times)

Recharge salutes: Wolf Cukier, a 17-year-old NASA intern who discovered a planet nearly seven times larger than Earth on his third day of work. “At first I thought it was a stellar eclipse, but the timing was wrong,” Cukier told NBC 4 New York. “It turned out to be a planet.”

I’ll leave you with this wintry image of the skinny shafts of rock, known as hoodoos, that rise from the basin of Utah’s Bryce Canyon National Park. The image, courtesy of the Interior Department’s Twitter feed, shows the seasonal mix of the orange rock with white snow. Thanks for reading Recharge, and have a great week ahead.