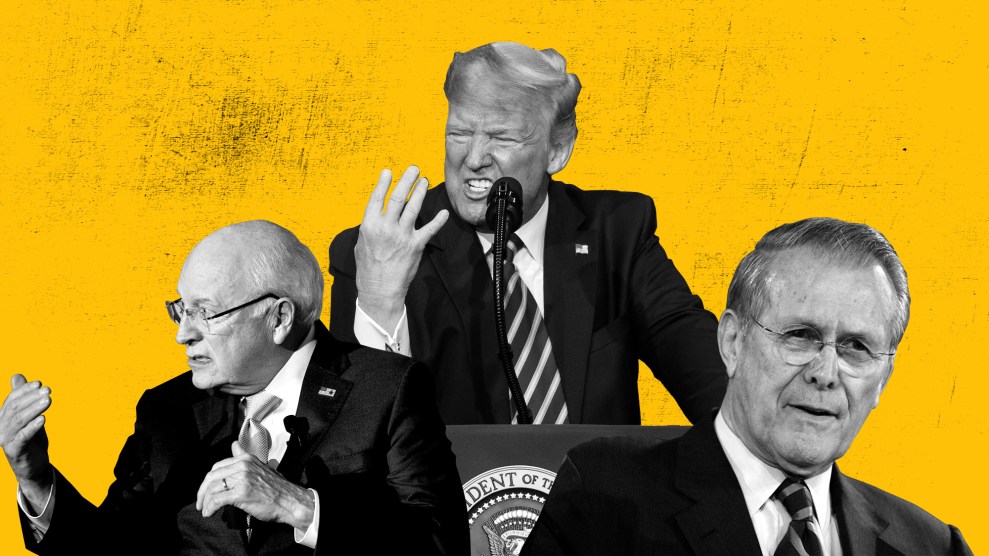 After last month’s assassination of Iran’s top general and the airstrikes of retaliation that left 50 US service members with brain injuries, fear of war climbed so fast that frantic searches for “World War III” and “Are we at war?” reached their highest levels in nearly 15 years. The escalation has subsided, but war isn’t off the table. Whether it erupts or doesn’t, the role of reporters and readers holds: scrutinize—not just the facts and fictions of official accounts, but the words used to create them.

How we talk about war is an early measure of whether we’re drifting to war, and whether we’re on guard against the manufacturing or stretching of reasons for it. It’s a historical constant: Carefully chosen euphemisms and deceptive sentence structures are routinely deployed to drum up public support and pave the way to battle. And it’s still happening.

Take, for example, a widely accepted catchall: “defense.” Last month, the Defense Department called the assassination in Iran a defensive act after President Trump said he was “call[ing] for one of the largest increases in national defense spending in American history” and “eliminat[ing] the Defense sequester.”

A lot of time and tweets are spent in defense of “defense,” even when we’re talking about offense. “The word ‘defense’ is a euphemism for being prepared to wage war or waging war,” says John Donnelly, senior defense reporter at CQ Roll Call and president of the Military Reporters and Editors Association. “‘Defense’ includes offense, and that’s a great example of an official euphemism that has just become an accepted term, even though it cloaks the more complicated, harsher reality.”

“Defense” hasn’t always been the Armed Forces’ official umbrella. The euphemism was born in 1949, when the War Department, aptly named, was renamed the Defense Department. In the wake of World War II and the United Nations’ declaration against wars of aggression, lawmakers looking for a more sanitized word settled on the self-justifying “defense,” a more palatable frame for the business of battle.

War euphemisms are big business, burned into us by the soft substitution of hard truth about torture with the clinical-sounding “enhanced interrogation techniques.” Remember that linguistic move of the Bush-Cheney era, mirrored by the media? It took a long time for the New York Times to discontinue and tersely disavow its default to “enhanced” euphemisms. The paper’s executive editor, Dean Baquet, half-apologized for it in hindsight, and he deserves half-credit for doing so. (That didn’t prevent Baquet from excoriating Mother Jones recently for our open resistance to false equivalencies in public life, calling our stance “untenable, nonjournalistic, immoral.” As if euphemizing torture, under the guise of rigorous restraint and neutrality, were journalistic and moral.)

Stare long enough at the mastheads and language of media and you begin to see the memos and marketing of the military. The euphemism “defense” gets reinforced by the media to this day: Almost every major newsroom has a “defense” reporter by name; in recent weeks Politico and the Washington Post were recruiting “defense” reporters, a beat that makes intuitive sense—it mirrors and monitors the Defense Department. After the creation of the Department of Homeland Security, job listings for reporters by that title began popping up. Ditto “national security” reporters, all in lockstep with state designations.

“The first casualty, when war comes, is truth,” goes the timeless saying by Hiram Johnson, the progressive senator from California during World War I. Already in the 1910s, “people were aware of the linguistic distortions that journalists and the government could work on reality,” says Geoff Nunberg, a linguist at the University of California, Berkeley’s School of Information.

Nunberg traces war euphemisms to the Crimean War, when the photographer Roger Fenton was dispatched to “make these photographs of cheerful children” and conceal soldiers’ suffering in the 1850s. “That’s when you get the first war correspondent and you begin to get euphemisms like ‘casualty,’ which just means loss to chance. That’s why insurance companies are ‘casualty’ companies. But it’s in the Crimean War that ‘casualty’ comes to be used for the injured and the dead in wartime.”

Architects of war are always, throughout history, architects of language (or served by those who are). Henry Kissinger, as secretary of state, green-lighted the Indonesian invasion of East Timor by leaning on language as a tool of cover-up: “It depends on how we construe” and contort the language of the Foreign Assistance Act, Kissinger secretly told the dictator Suharto in condoning the invasion in a now-declassified State Department telegram. It happened when Gen. Maxwell Taylor’s euphemism “controlled escalation” was trotted out to soft-pedal the uncontrolled arming of South Vietnam. And it was freshly evident in the torture memos drafted by John Yoo, a top legal appointee under President George W. Bush.

“The first casualty, when war comes, is truth.”

A corollary of “defense” is “readiness.” “If you say this thing we want to buy will help ‘readiness,’ everyone just salutes smartly because who’s against readiness?” Donnelly says. “The word used to have a precise meaning about measures of readiness—numbers of people, levels of training, status of equipment. But the meaning has grown to the point where, because it means everything, it means nothing.”

“People use ‘readiness’ to describe anything military. The reason that’s dangerous is it’s designed to make people stop thinking.”

Public persuasion is achieved not just through word choice; it’s handled through sentence structure. Take, for example, the passive construction commonly used by the military and media: “An airstrike was conducted.”

Who conducted the strike? Wrong question: It was conducted. By itself, grammatically. Agentless actions and attributionless strikes reduce the likelihood of public pushback and journalistic digging. “The passive is the apparatus that language gives us to emphasize the victims affected by an action rather than its perpetrators,” Nunberg says. It’s a time-tested device, flagged by George Orwell in his landmark essay “Politics and the English Language” and the stomach-turning pages of the military manipulation log Public Affairs: The Military and the Media, 1962–1968, an inventory of the ways the military coerces the media into collaboration.

Military language creeps into everyday speech, giving us everything from “trench coat” (yours for just $700 at Brooks Brothers) to “Jeep,” from the initials G.P. on the sides of general-purpose vehicles in World War II. The Vietnam War gave us “A-team,” from Operational Detachment Alpha. And World War II created what lands on our radar—ra(dio) d(etection) a(nd) r(anging). War weaponizes political speech, giving us “bombshell” reports that leave us “shell-shocked” and “blown away,” “on blast” with “incoming fire” for bad tweets causing “friendly fire” and “collateral damage” if we’re not “on guard” against “self-inflicted wounds” in the “fallout.” At least we can “take cover” on other sites in our “arsenal” of commentary—say, a blog. Or hit the “nuclear option”: delete Twitter.

“When the country is at war as long as we have been, inevitably phrases and just ways of thinking migrate from the military to the civilian realm,” Donnelly says.

War euphemisms manifest in workplaces, too, where “rank-and-files” take “marching orders” from bosses whose “warpath” we try to avoid while telling ourselves to “soldier on” and “be a trooper” in “uphill battles” to unionize industries, even when it’s a “long shot” and we’re told to “lower our sights.” (“Long shot” derives from a rifle’s long-distance shot. “Lower your sights” comes from lowering a rifle’s sights or scope.) We’ve got tech “boot camps” and fitness “boot camps,” cooking “boot camps” and chess “boot camps,” and it’s not “over the top” to say war is our biggest supplier of idiomatic expressions—“over the top” comes from climbing over the top of sandbags at the lip of trenches to launch an attack.

Military speech is so ingrained in civilian life that our best “line of attack” in 2020 is not just to critically consume the news, but to look for the ways language frames it. Certain warspeak is desirable: Culture wars are often as lethal as military ones, and battlefields need naming. But when it sedates us, numbing us to the consequences of pumping bullets into chests, or violating the Constitution’s war powers clause, it’s time for clearer words.

If war is on the way this year—if Trump’s October-surprise playbook has it coming—it’s not just military reporters we’ll have to turn to. Corruption reporters, by that name, will have to be normalized. And the corruption of language, as a weapon of the military and the media, is never far from the battlefield.

If you’ve got other euphemisms to watch for, let us know: