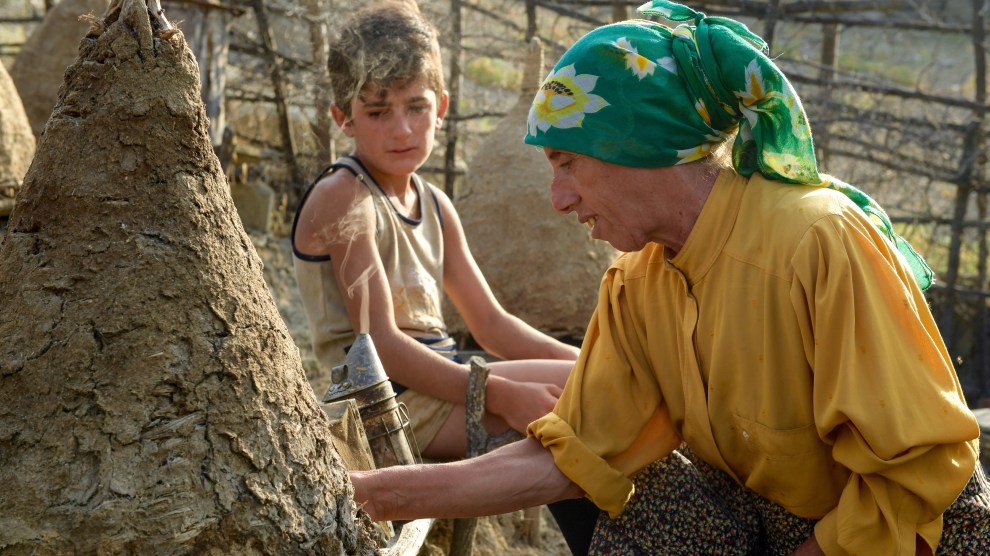 Honeyland, an Oscar contender for both best documentary feature and best international feature, may first appear to be concerned with wild beekeeping in the small, landlocked Republic of North Macedonia. And bees do fill the film—flitting in and out of the frame, stinging hapless neighbors, and alchemizing the harsh landscape into molten gold. But the documentary doesn’t teach us much about cultivating honey. At its heart, this film is a character study, a meditation on the life of a woman who has carved out a precarious existence in an unforgiving place.

When we first meet Hatidze, she is ascending the path from the rustic homestead she shares with her dying mother and her dog, Jackie, in search of wild bees in the surrounding hills. She has survived for more than 50 years in the ruins of an abandoned village with no electricity or indoor plumbing, eking out her existence by journeying to the closest city to trade the honey for medicine and fruit. And by all accounts, she is quite happy, according to filmmakers Tamara Kotevska and Ljubomir Stefanov.

When the filmmakers first met her, she was singing, Kotevska recalled when I interviewed her and Stefanov last week. “Every time she has a new person coming to her door, she starts singing to them to break the ice.” She also sings to the bees, a technique that appears to quell their stings.

The arrival of a nomadic family—trailer, shabby cattle, kittens, and a litter of children in tow—shatters Hatidze’s serene world, and that tension sets the dramatic stakes of the film. Her new neighbors don’t share her philosophy of taking only what’s needed from the bees. Their avarice, and the events that soon unfold, have led many critics to praise the film as an allegory for the modern world’s impact on our most fragile ecosystems.

But there’s another dimension to Hatidze’s story that, for me, elevates the film above a simple fable about human greed. The death of Hatidze’s two sisters has tasked her with caring for her dying mother alone. Their conversations, which take place in the dark, cave-like interior of their home, are often quite funny—the daily bickering of two aging women. But they also contain poignant revelations of Hatidze’s inner yearnings. “When matchmakers were coming, you didn’t accept any?” she asks her mother. “When they were asking for my hand?”

“She’s the greatest extrovert and artist you’ll ever meet, and yet she’s trapped all her life in this abandoned area.”

Hatidze seems to wonder about the paths her life might have taken. “If I’d had a son like you,” she later tells one of the neighbor boys, “things would be different.”

“You can see how unjust life was to her, because she’s the greatest extrovert and artist you’ll ever meet, and yet she’s trapped all her life in this abandoned area, and given the burden to take care of her mother,” Kotevska said.

The filmmakers spent three years with Hatidze. I wondered why someone would agree to bare herself on camera this way. But Kotevska says that there was never any need for negotiation; from the first time she encountered the filmmakers, Hatidze wanted to get her story out to the world. As Kotevska put it, “this was her way of liberation.”