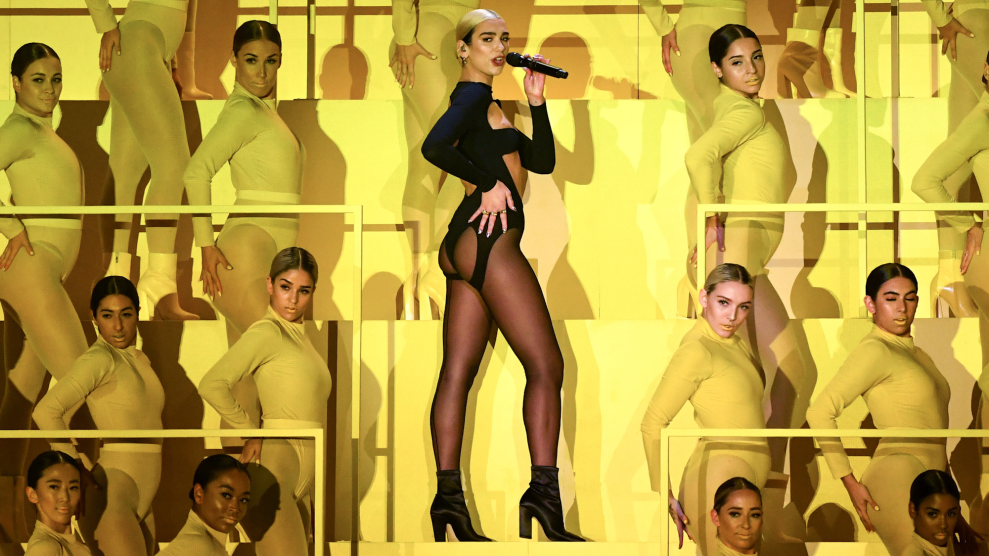 Dua Lipa declares her aspirations with her first line: “You want a timeless song, I wanna change the game.” On Future Nostalgia, Lipa’s sophomore album, she crafts a pop hit with all the qualities of a sci-fi flick from the 1960s (clean, crisp color) or the spacey work of architect John Lautner (who she name-checks in line two). Her point isn’t to last forever. It is to dance, now. It’s what I’d like to call “end of the world pop.”

End-of-the-world pop is not a new phenomenon. And it doesn’t have to mean the world is actually ending. You’re actually probably all too familiar with it: It’s the strain of pop that includes the likes of Lady Gaga’s The Fame Monster, Kesha’s, well, entire discography, and Katy Perry’s Teenage Dream. (Britney Spears’ on-the-nose classic, “Til the World Ends” can come too.) It’s a type of pop music that isn’t “timeless” but so of its moment, so defining, that even the end of the world can’t stop you enjoying it.

Lipa is neither the first nor the last pop girl to navigate these waters. Future Nostalgia‘s name only proves she’s aware that we’ll remember her sound as the one that marked our moment. (“My sound, my sound,” she sings, “future nostalgia.”)

In some ways, Lipa didn’t have a choice but to be this bold. Her debut album, self-titled Dua Lipa, launched the British star into the mainstream with the sleeper hit “Blow My Mind (Mwah)” and the radio-ready “New Rules.” She landed collabs (and massive hits) with the likes of Calvin Harris and Diplo. Those collaborations—paired with a well-received debut—positioned her as the next hitmaker in pop music. No pressure. Then she won the Grammy for Best New Artist in 2019.

The single “Don’t Start Now,” was released in 2019 and delivered on the promise. It was the nu-disco hit that’s become her highest-charting track yet. “Lipa’s new music isn’t innovating on classic pop sounds to create something new,” writes Joseph Longo at MEL Magazine. “It’s more of a tribute—a return to comfortably recognizable tunes.” (Her next single, “Physical,” was a more-than-obvious throwback to Olivia Newton John’s 1981 song of the same name.)

All was going well until her album leaked—moving up the release date. Even amid the mess, Future Nostalgia has landed confidently.

The tracks never once lose steam, each one holding as much potential as the next to be a single. It’s a lot to ask of an audience, and only few can pull it off. But for every “Don’t Start Now” and “Physical” there’s a “Pretty Please” and “Boys Will Be Boys.” While the technical aspects of the songs lend them to evoking different initial emotions—higher BPM’s, higher energy—Dua’s vocal delivery is uniform, matching the feminist strings of “Boys Will Be Boys” to the energy of “Physical.”

Future Nostalgia’s influences are everywhere, from the Kylie Minogue tinted beats of “Hallucinate” to the INXS-sampled “Break My Heart.” (The video for “Break My Heart” not-so-subtly includes a pre-choreographed TikTok dance—a great new way for artists to juice their songs.) The Tove Lo cowrite “Cool” is a Prince-meets-Gwen-Stefani joint that gives Carly Rae Jepsen a run for her money.

Dua Lipa’s voice is loud and clear: Dance, crush, be happy, and forget about what you imagined the future to be. Then, you’ll only be nostalgic for her, now.