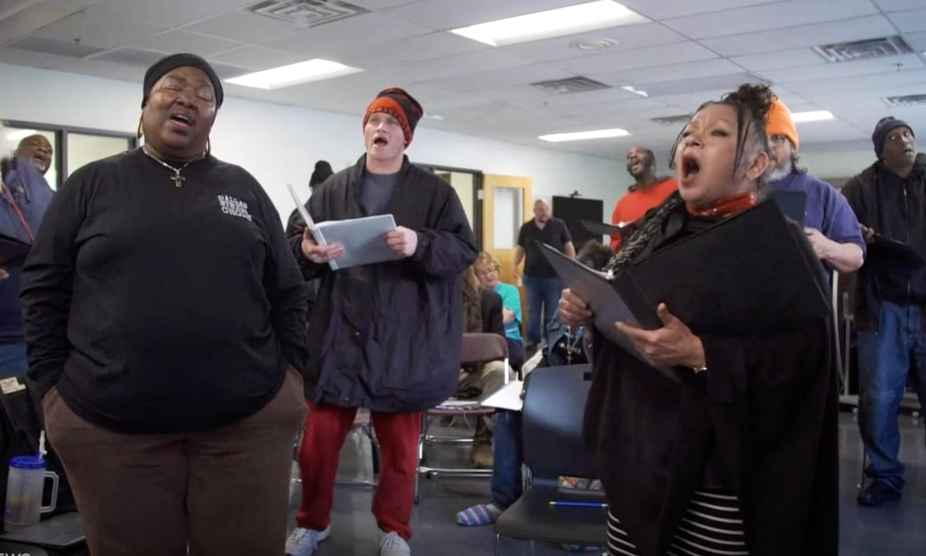 Choir members get a snack and $2 for their time. But they also get something else during their weekly rehearsals: reinforcement and respect.

The Dallas Street Choir formed with the goal of busting stereotypes and misperceptions about people forced to live in shelters or on the streets. Members include workers who can’t afford rent, and people who lost their homes under mountains of medical debt, or evicted after losing their jobs.

In the choir, they sing as one. They’ve played in concerts throughout Dallas and have performed at New York’s Carnegie Hall. On this Wednesday morning inside a day shelter, their sleeping bags and packs nearby, the choir members sang songs such as Paul Simon’s “Gone at Last.”

“My prayers goes out to those people out there on the streets, because it hurt me deep down inside,” one vocalist, 55-year-old Darrell Payne, told PBS NewsHour. The choir, he said, “makes me stronger, makes my voice stronger.”

Dallas, which is seeing increased homelessness as it booms, is one of 12 cities with musical programs for people without homes. The choir’s founder, Jonathan Palant, a professor and conductor of choirs in the region, has helped some 2,000 Dallas Street Choir singers over the past five years. “What we offer through music is personal integrity,” he said. “You may not have four walls, but our singers will tell you, four walls, a home doesn’t make.”

Be prepared. Racism blocked Herman Flora’s drive to reach the pinnacle of Scouting at a period of historically heightened segregation. Now 90, he was watching his grandson become an Eagle Scout when Herman got a surprise: special recognition for his own work more than seven decades ago. He says Scouting prepared him for a future to defend his nation, attend Howard University, and succeed in Washington real estate. “It is,” he said, “what made me what I am.” (Washington Post)

Saving wallabies. Chris Pryor has helped grow the population of brush-tailed rock-wallabies in Australia’s Kangaroo Valley. Most survived the horrific bushfires that swept parts of the country recently. Pryor’s home didn’t, but she’s thinking of others while she, with a strong support group, works to restore her house. “It’s just stuff,” she says in the ashes of her kitchen. “You can replace things.” (Christian Science Monitor)

What can’t libraries do? Public libraries have grown to serve as job centers, cafes, and places to earn GEDs, learn English and other languages, and get your taxes done. Now Boston libraries are joining those in Chicago and New York as places considering the construction of adjoining apartments to ease a housing crunch. The Boston Public Library is weighing whether to add housing to four of its 25 neighborhood branches. (WGBH.org)

Inspired. First grade teacher LaToya McGriff still remembers her excitement when a teacher of hers dressed up as a storybook character for a class. For Black History Month, McGriff wanted to do more than that: She wanted her Virginia students to see historical figures like themselves every day—and learn how Black pioneers and trailblazers made a mark. McGriff said her interactive lessons have stirred curiosity among her students—about history and themselves. (CBS News)

I’ll leave you with this golden view of California’s Point Reyes National Park, via the Interior Department Twitter feed. Have a great week ahead!