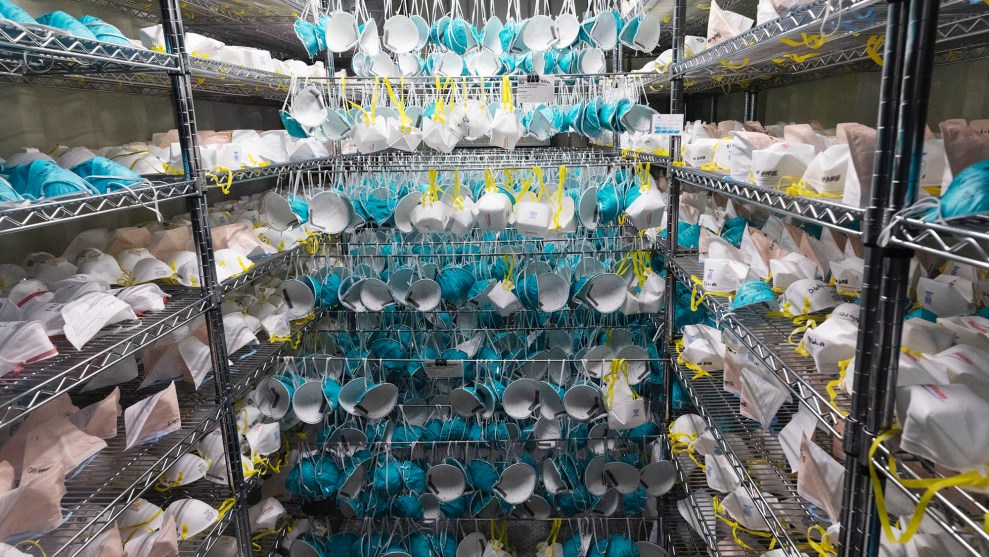 With a short supply of face masks across the country and a shorter supply of political action and accountability at the highest levels of government to mobilize for front-line workers’ safety, it’s easy to overlook some of the inspiring ways that communities are getting results. But solidarity is growing: A new movement, #MasksForThePeople, launched last week as a crowdfunding effort to raise $1 million for protective gear, and support is coming in.

In the span of a few days, the campaign raised more than $100,000, a fraction of the billions (or trillions) this moment calls for, but the community cash is adding up. Each $10,000 provides masks and sanitizer for up to 5,000 people, thanks to civil rights leader Mike McBride and political comedian W. Kamau Bell, who co-lead #MasksForThePeople on the humanitarian hope that collective action can overcome contagion, corruption, and unequal power structures that disproportionately affect people in poverty, especially in communities of color, and anyone on the front lines.

“Our greatest aspiration is to create a tipping point of charitable giving,” McBride tells me, and it’s picking up speed, “which speaks to the urgency” supporters feel. A big boost came Monday when Twitter chief Jack Dorsey got wind and donated the full $1 million, taking #MasksForThePeople over the top. Big-donor pulls are always welcome, if double-edged, as certain billionaires’ donations double as publicity measures that conceal (or expose) enduring inequalities that predate the pandemic. But it’s fresh evidence that grassroots efforts like #MasksForThePeople compel action and awareness at all levels of society.

Masks, in many ways, cover who we are. They also reveal us. Supplying them, or failing to, is a test of who we are right now, and #MasksForThePeople is witnessing a surge in solidarity.

Daily dose. Artists everywhere are finding ways to connect creatively, including San Francisco–based artist Chiraag Bhakta, who is adapting to the closures by opening his studio to the world. He’s posting photos each day of a created or found object in his collection on Instagram, alongside personal commentary. Under the name *Pardon My Hindi, he shares his perspective as a South Asian American artist with razor-sharp wit and insight, injected with humor, about communities and unjust structures that deserve more light. Like this tissue packet, which he purchased in India, branded with the worshipfully illustrated words “My Boss,” whom Bhakta likens to Jeff Bezos, making headlines for contemptible labor practices at Amazon. “Honestly, I’m just trying to stay busy since I’m currently out of a job,” Bhakta tells me. “With these posts, I’m attempting to widen the conversation by showing an object and juxtaposing it with a current or historical story that people might not know. For me this gives the object another dimension of life,” and gives viewers hope. One visitor to his Instagram writes, “Your posts have been a beacon of light 🙌🏾” during this pandemic. The studio doors are open @PardonMyHindi.

Charged up. Medical students are rallying to collect cellphone chargers as donations for COVID-19 patients who enter hospitals without their own. Students Anthony Nardone, Carina De La Cueva, and Kamran Abri Lavasani are running the charger drive to get patients “connected with their family members,” De La Cueva tells me. Another student, India Perez-Urbano, created a GoFundMe that raised almost $1,000 for chargers in the two days after launching. “There’s been so much outpouring of support,” says Dr. Neeta Thakur of UCSF, who mentors the students. “Patients often go a full day with almost no human interaction…Phones are their only lifeline to their social support systems.” Her team wants to “restore that lifeline,” and the chargers are coming in.

On the house. Shopping for groceries is a risky proposition right now, but a helping hand can appear: A buyer anonymously paid for thousands of people’s groceries during senior hour at more than 70 supermarkets in Louisiana and Georgia. “Look at these faces—you can see the smiles and tears through the masks!” said one viewer of the photos that show shoppers breezing through the checkout aisles. The buyer’s identity was later confirmed: Tyler Perry, who didn’t deny the deed. “What I’m hoping is that by paying for the groceries for these people who are just like my mother, my aunt, come from where I come from…that other people will join in…You may not be able to pay for 73 grocery stores, but maybe you can buy groceries for one person.”

Nature now. If you’ve developed cabin fever, let the oceans and pastures come to you. A live feed of polar bears? Got it. Horses grazing in real time? Every day. A Northern Lights camera? Right this way. Beaches and farms and more. Keep a browser tab open in the background or foreground of your day, and run a live feed. Thanks to reader Annie Edwards for the tip, and Explore.org for creating it. Kentucky horses are writing this newsletter with me.

This or that? 126 years ago today, a girl was born in Chattanooga, Tennessee, in poverty. By the time she was 9, both her parents had died, as did a brother. She took care of her siblings and became a singer, sharing her voice and wealth of wisdom with a world that didn’t return that wealth. Especially today, let’s hear, recognize, and learn from Bessie Smith. Happy birthday to the Empress of the Blues. How to choose just one? Does this recording or that one stir you more? Let me know at recharge@motherjones.com.

Back by popular demand: the ceremonial Recharge photo from the National Park Service Twitter feed, this one of a sunrise peeking through the Grand Canyon, requested by several readers. Have a strong week ahead, and let me know about Bessie Smith’s birthday blues.

Additional photos from this morning's sunrise as seen from Yavapai Point on the South Rim (Sunday, April 12, 2020.)