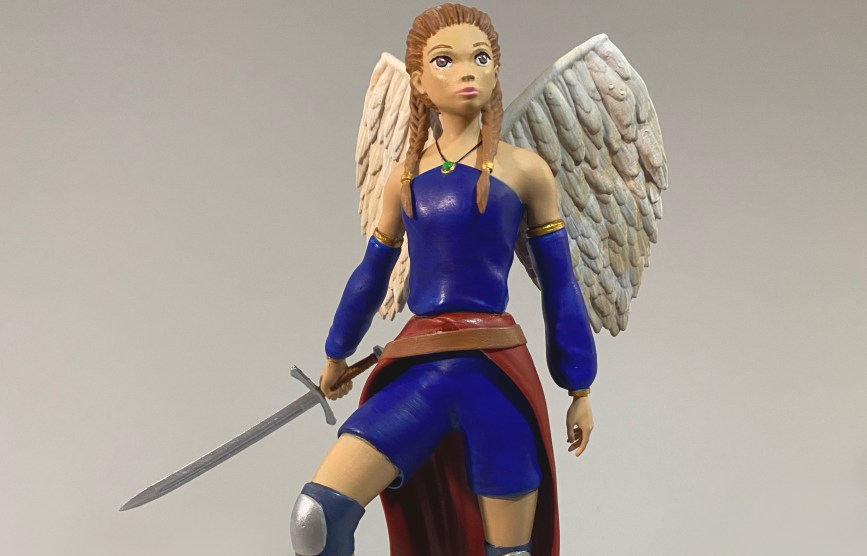 One of four winning designs by kids in a contest to create superheroes for our moment, made by 12-year-old Haile F. and sculptor Steven Cartoccio, in a challenge organized by comic studio LootHaile F./Steven Cartoccio of Concrete Jungle/Loot

As school closures sweep the world and affect more than 55 million US students, kids are finding creative ways to stay artistically engaged, some by drawing online, and a lucky few—including 12-year-old Haile in New York and 14-year-old Milo in the United Kingdom—by creating action figures to protect the planet’s most vulnerable people. And they’re winning awards for it.

A worldwide contest held by Brooklyn-based art studio and comic space Loot invited kids to invent characters with the strength and stamina to “address the challenges not only of their lives, but of the entire world,” the contest organizer tells me. A panel of judges picked four winners, and a renowned sculptor and animator is bringing their designs to life.

Even while Loot’s doors are temporarily closed, it’s keeping kids active on Instagram, including Haile, whose winning character “protects her kingdom from evil,” she says. And Milo, who designed “a determined and headstrong warrior who wants to help those who can’t help themselves.” Each of the four winners gets their figures illustrated and sculpted and possibly turned into comic books and animated shorts by Steven Cartoccio, known for teaming up with hip-hop legends Ghostface and Raekwon of Wu-Tang Clan, and Kool Keith, to create their own action figures.

“Our path since the pandemic started has been to respond to the challenge of kids being out of school,” Loot’s founder, Joe Einhorn, tells me. He and the Loot crew have made life in lockdown a little easier by posting a free art-lesson video every morning, seven days a week.

At press time, Mother Jones could not independently confirm that the 12-year-old’s and 14-year-old’s action figures can cure contagion, solve pandemics, and halt the rise of protofascism worldwide, but early evidence suggests they can. I mean, just look at them (and click the right arrow to scroll):

Some of the character submissions for our action figure contest. Winning kid will get to make their own action figure with @scartoccio! It’s in the hands of our judges now @emmahemingwillis @colinford #DjordjeDjokovic

Princess Anya by Haile F., age 12 is the first winner of our action figure contest. Thank you @scartoccio for making it real. Stay tuned as we have more winners coming soon!

#SolvingIt. A step or two removed from the daily news cycle are front-line workers and community leaders #SolvingIt. The uplifting hashtag is part of a new Instagram series highlighting young artists, activists, and other changemakers tackling the world’s most pressing challenges, from corruption to contagion and wealth inequality. #SolvingIt assembles illustrations of people leading the way on microplastics in Bali, pipeline politics on Native American lands, and climate change. Among those #SolvingIt is journalist Nelufar Hedayat, whose new podcast, Course Correction, amplifies solutions, and whose weekly show, #DearWorld Live, launched last Tuesday with a chilling but constructive look at India’s lockdown affecting 1.3 billion people. Who else is #SolvingIt?

Balcony fix. A pastor in London is easing elder isolation by singing to residents from a distance with friends on violin and guitar. Amy Tan and her crew are criss-crossing neighborhoods to perform Al Green’s “Let’s Stay Together” and Frank Sinatra’s “Fly Me to the Moon.” “The right music will lift my spirits,” she says, “so I think of all these people who have to self-isolate and how it affects them mentally, emotionally.” One neighbor with multiple sclerosis, living in isolation, had her birthday plans preempted by the pandemic, so she welcomed Tan’s visit. If you’re not on her walking path, watch Tan here.

No one’s pawn. A rising 16-year-old chess superstar did the unthinkable: He beat world champion Magnus Carlsen, the strongest player of all time, in a 16-game match last week. Mere mortals dream of it, but Iranian-born Alireza Firouzja took Magnus down a peg (someone had to). The 16-year-old plays under the flag of a global chess organization rather than his native Iran, which he left in protest of government restrictions on citizens competing against Israelis, a stance Alireza does not accept. “The only thing I think about is chess,” he says from France, where he moved to with his father. “It’s not easy” being shut in by the pandemic, “but luckily for this quarantine, we got the Magnus tournament.”

Uncaged. As social distancing continues, pet distancing doesn’t. Animal adoptions are picking up in Florida, where a shelter announced empty kennels for the first time in its history. The need for mental health reinforcements is not new, but it’s heightened during the pandemic, and the staff at Palm Beach County Animal Care and Control celebrated the news with a video of workers cheering in masks.

This or that? Two musical pioneers, both jazz bassists, share a birthday today: Paul Chambers and Charles Mingus. If you’ve got Miles Davis’ Kind of Blue on a playlist, you’ve got Chambers’ signature low-register sound, a bowed, plucked, strummed bassline. Mingus revolutionized the instrument by lifting it from the rhythm section to a melodic foreground. He was also a mesmerizing pianist. Which recharges you more, this Chambers recording or this Mingus one? Watch below, and let me know at recharge@motherjones.com.

I’ll leave you with a picnic perch overlooking the Grand Canyon, from the National Park Service Twitter feed. Have a safe week ahead, and let me know about today’s birthday battle: Chambers or Mingus?

A7: Find some peace and solitude by learning about your favorite park online! Settle in for a story, check out photo galleries, or watch a wildlife cam!