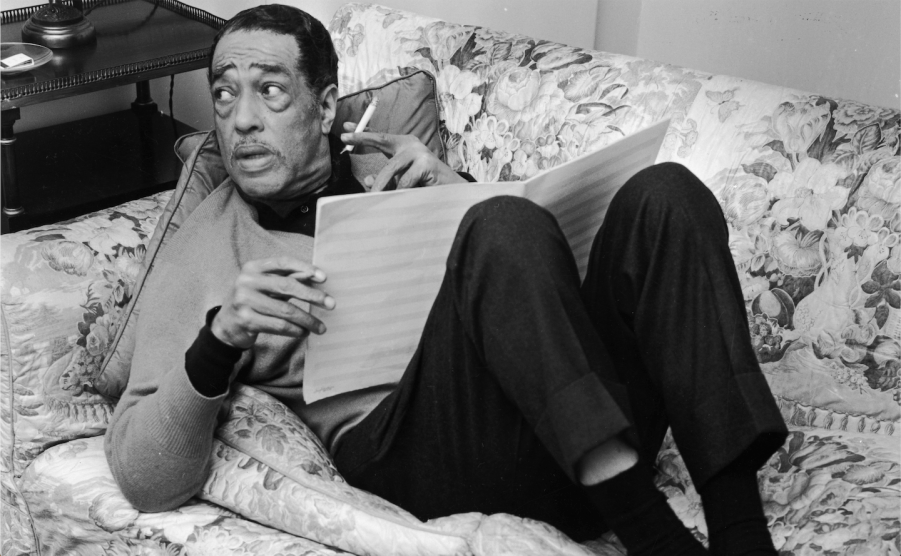 On a bright day 121 years ago today, in Washington, DC, two pioneering musicians named Daisy and James welcomed their son, Edward, into the world, and set in motion an artistic revolution embodied by the 3,000-plus compositions he created. Edward did more to transform the sound of American life, and the workings of bands, than anyone else in his time, but he wasn’t alone. Social distancing of another kind was in effect, but he pulled in space and time and galaxies of musicians and listeners, with a nickname supremely fit to his style.

For Duke Ellington’s birthday today, Healdsburg Jazz in California, overcoming the cancellation of its festival, adapted by throwing a Zoom listening party for hundreds of people on Sunday with live home performances, clips, and interactive walkthroughs of Duke’s life, hosted by bassist Marcus Shelby. “The deeper you dig, the more treasure you find,” Shelby said, capturing the vitality and range of a legend so canonized as a bandleader that it’s easy to overlook Duke’s first passion: piano. And his greatest strength: listening. “The most important thing I look for in a musician,” Duke once said, “is whether [the musician] knows how to listen.”

For Duke’s birthday, let me know which recharges you more, this original—recorded secretly and kept hidden for two decades before its release in the ’70s, when it won a Grammy—or this rendition by 28-year-old Aaron Diehl in 2013. Diehl was enamored by the ballad’s “impressionistic quality,” he tells me. “Just such a beautiful color palette, and that sense of space and serene line of melody.”

Listen below, and let me know at recharge@motherjones.com: Duke’s or Diehl’s?

Postcard to the future. Seventeen years ago today, one of the most defining and powerful essays ever written about Nina Simone—who’d died days earlier—appeared in the Village Voice, an essay as profound as its subject. The themes are all too familiar during today’s pandemic: stamina tested, distance felt, justice sometimes achieved, and “love not quite as hoped,” but love still. It was written by the interdisciplinary artist and historian Thulani Davis, who hears Simone in a constellation of civil rights and artistic giants including Alice Walker, James Baldwin, and Toni Cade Bambara. Two decades later, Simone’s sound continues to enlighten and educate, as does Davis, a widely admired professor at the University of Wisconsin, Madison, on Twitter @temne. Here’s that piece, and the sound:

Take three. If you’re hearing a theme, it’s because jazz is a sound of resilience: pandemic-fighting, immunity-boosting, full of life, which, before the coronavirus claimed him, was lived fully by Henry Grimes. Grimes was one of the most revered bassists in jazz, who’d dropped off in the ’60s and by the ’80s was widely reported dead but resurfaced in 2002 when a social worker tracked him down in a single-room-occupancy LA hotel. He hadn’t played in three decades. But he moved to New York in 2003, returning to musical form. In a world he had never left, a recording that remains, here with Sonny Rollins.

Take four. Look up! We interrupt this session to bring you a giant asteroid passing overhead today, the biggest this year. You need a telescope for it, but go here for the next best way to see it. It’s a mile wide and twice as long. Thanks to my colleague Ben Dreyfuss, a former NASA astrophysicist, for the tip.

Take five. Before the New Orleans saint of music education Ellis Marsalis died this month of you-know-what, he raised a family of jazz trailblazers, including trumpeter Wynton and saxophonist Branford, who said Ellis “poured everything he had into making us the best of what we could be.” The mayor of New Orleans called Ellis “a legend…Words aren’t sufficient to describe the art, the joy & the wonder he showed the world.”

Take six. Alto saxophonist Lee Konitz lit up Miles Davis’ early bands and lived to see the coronavirus (but didn’t survive it), and in his vibrant 92 years, swung hard. Konitz had a roundly melodic style, bending notes and curving harmonic tones, taking wide lyrical turns in improvisations. He was born to Russian and Austrian parents in Chicago, and lives in his music.

Pulling together. Communities of Asian Americans and Asians across backgrounds have found creative ways to respond to the rise of xenophobic rhetoric and targeting in the wake of the outbreak, including a digital town hall tomorrow on how “Asian American history can help us understand the experience of AAPIs during this pandemic.” Big-name participants include novelist Viet Thanh Nguyen, comedian Hari Kondabolu, PBS NewsHour’s Amna Nawaz, California Rep. Judy Chu, and many others. Details here.

Book it. Little Free Libraries, the front-yard bookshelves, just won a major award for its contributions to global education. While the future of physical book-sharing is unknown, the libraries’ impact is growing: 100,000 registered Little Free Libraries in 100 countries. The movement started with one person. Thanks to Dave Beard, my Recharge predecessor and National Geographic’s exec newsletter editor, for this book tip.

I’ll leave you with this view from the National Park Service. Let me know about Duke’s recording and Aaron Diehl’s, at recharge@motherjones.com.

Ready for today's #FindYourPark Twitter chat? It's almost time! Join us at 1 pm ET to talk #NationalParkWeek and all things parks!