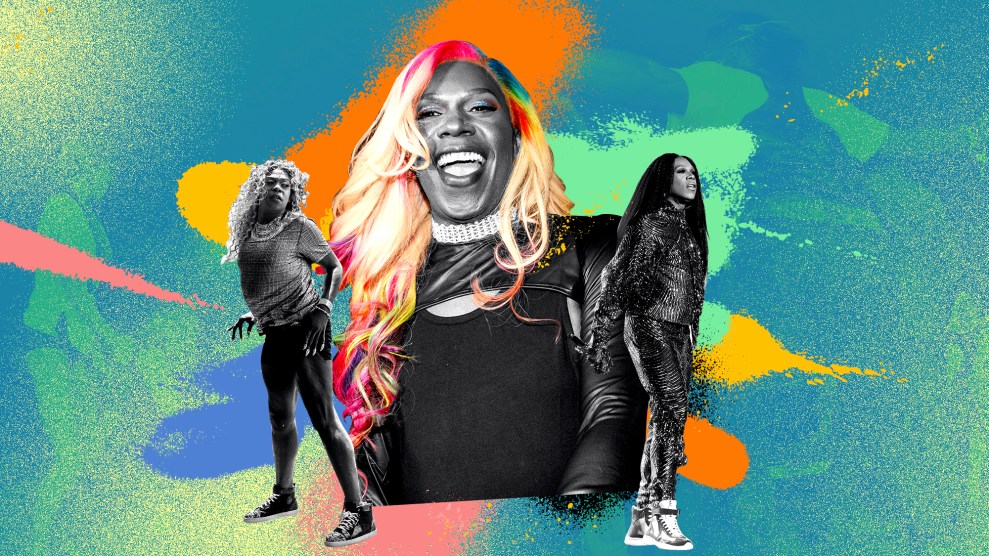 A worldwide pandemic has shut down the places where rump-wiggling typically thrives—bars, clubs, the darkened living-room floors of friends and friends of friends. If we can’t be together, we can neither get down nor shake it together.

But, still, here it is: Louder from Big Freedia. The queen of bounce—the New Orleans-bred hip hop subgenre that mimics the city’s festive, collaborative, energetic, close-knit, boomingly loud style—is back in a world where Mardi Gras might not be. Bounce isn’t just dance music; it’s party music.

“This new EP is keeping the bounce element of my core,” Freedia tells Mother Jones over the phone, but “trying new sounds, new instruments, new collaboration.”

It’s a natural pairing, shameless party pop and bounce. Both build on an ethos of indulgence. Shake your ass, chug a drink, lose yourself in a kiss. It is a celebration. It is an escape. It is communal. And in a moment when escape and celebration and community feel unattainable, it seems all wrong.

Yet somehow it works. That owes a lot to bounce’s unique history—it arose in the horror and uncertainty of Hurricane Katrina’s aftermath among those displaced by the storm. There is no better party music for the present, it turns out, than the sounds of a diaspora remembering home.

The truth is, many of us want to move right now. “Dancing and disease have always been fused,” notes Stassa Edwards in her detailed chronicle of mass death and its relationship with dance—from medieval tapestries depicting dancing Black Plague victims to ACT UP utilizing choreographed death movements for their protests to pandemic TikTok choreography. Bounce belongs here, too.

“It was stories set to bounce rhythms, about realities of New Orleans, wards, violence—stories of everyday life,” says Holly Hobbs, an ethnomusicologist and co-founder of the NOLA Hip Hop and Bounce Archive. Over its history, from Katy Red to Sissy Nobby to Juvenile to Freedia, the music morphed into something “less about storytelling in the rap sense, and much more about short phrases repeated over and over and over again.” When asked to define bounce music, Freedia reminds me, “it’s all about having fun.” It’s uptempo, heavy on the bass, full of call and response. Their storytelling may have been subsumed by the thumping sound, but bounce artists were telling a larger story merely by making music to dance to. It meant something to party in honor of New Orleans. “Music,” Freedia says, “is that outlet to take you from whatever state you’re in to another.”

Katrina hit the city in August 2005, displacing thousands of people, causing decade-lasting damage, and revealing massive failures in our government’s ability to respond. (Sound familiar?) “When I went to shut the window in the living room, I saw something I’d never seen in my life,” Freedia wrote in her 2015 autobiography. “Water pouring down the streets, steadily rising higher and higher.”

Freedia and her family, like so many others, headed westward to Texas, bringing bounce with them. “When we were displaced from Katrina, our music was displaced as well,” Freedia told the Fader. There, in the Lone Star State, Big Freedia began laying the groundwork for bounce to thrive in the decade to come.

Pre-Katrina, bounce wasn’t unpopular, but “the future of bounce was somewhat unclear at the point that Katrina hit,” says Hobbs. It’s “not really accurate to say that the popularity of bounce was waning. It’s more so that things were just shifting and morphing into different things.” Before the storm, it was the sound of block parties and local dance clubs, decorating the streets, homes, and corner clubs of the Crescent City. After, it was the melody of home for those who left and a way to remember.

“In so many ways, bounce is the sound of New Orleans,” Hobbs says. “So many things about New Orleans, nobody outside of New Orleans really knew about prior to Katrina.” Bounce isn’t a pure form. One of the fundamental components of bounce music, the Triggerman beat, originated in Queens, New York. But artists in the South, mainly New Orleans, took it and transformed it into something new. Bounce took hold in Freedia’s adopted community in Texas as something familiar in a different context—an old toy bent into new shapes. It was at once nostalgic and groundbreaking. Without New Orleans, bounce stepped in—all its ass-shaking and party-happy sounds had evolved and crystalized into an unlikely paean of a displaced people remembering home.

Bounce wasn’t introduced to the mainstream until the late 2000s. And Freedia, Hobbs, “was at the forefront of that,” playing local show after local show and pushing bounce music beyond its original geographical boundaries.

Fifteen years later, bounce has permeated mainstream hip hop and pop. Bits of bounce music have found their way into top 10 tracks like Icona Pop’s “I Love It,” with its call-and-response chorus. Among these borrowings is Freedia’s voice. It shows up in Beyoncé’s “Formation” declaring, “I did not come to play with you hoes,” and it introduces Drake’s “Nice For What” by way of a challenge: “I wanna know who motherfuckin’ representin’ in here tonight.” These were the uncredited manifestations of what Vice called “The Ghost of Big Freedia.”

“It does feel quite odd for mainstream culture to seemingly make a phantom or ghost out of a living person,” Myles Johnson writes. “Yet in the case of Big Freedia, although she is alive and kicking, she is still treated like an apparition when mainstream artists want to collaborate with her.”

Freedia hasn’t been shy about disclosing the sting of not being credited in the past. She’s put a lot of work into bounce. But to have two of the biggest stars in the world use her voice—well, Freedia ultimately wasn’t too bothered. It’s what she’d set out to do a decade earlier, after all.

“Opening doors for a black gay artist like myself to be even on their track?” she told The Breakfast Club in January. “It was a privilege and an honor for me to do it.”

But she’s not without her reservations. “I just want to make sure that I stay in the forefront” of bounce, Freedia tells me. It’s about setting the bar high, letting the industry know this isn’t something you can just take, she says. “People need to know the hard work and determination I’ve put into the bounce culture.”

The culture of bounce wouldn’t exist in its modern iteration without Freedia—that’s undeniable. With her new EP, Freedia is, once again, trying to put bounce front and center. Louder is her most consciously mainstream pop-friendly release yet. Where before she was ignored by stars who had commandeered the NOLA party sound, her newest work flaunts Freedia’s hold over the industry, boasting two collaborations with Icona Pop and one with Kesha—new heights for someone who, just a few years ago, was playing sports bars retrofitted into clubs.

Of her pop guests, she says, she “wanted them to bring that sound,” by which she means pure pop. Freedia tapped Icona Pop for her title track in part because of the Swedish duo’s “I Love It”—bounce incorporating the pop that had incorporated bounce. On Louder, Big Freedia creates a fusion of the subgenre and mainstream pop, but on her own terms. “Face down, ass up, watch me do my power dance,” Icona Pop and Freedia exalt together on the title track.

When I ask Freedia how this EP stacks up to a lifetime of iconic work, the answer in simple: “People need to know I’m not playing.”

It’s Freedia’s “Chasing Rainbows,” named “Happiest Video of the Year” by MTV, that pushes her to reckon with what bounce can do with pop. “My prescription is survival, read the scripture from the Bible,” she chants in the opening lines. “Watch the system take my idols, now I pray for all my rivals.” Louder doesn’t need to be retrofitted to explain a coronavirus world. It’s already the sound of survival.

Fifteen years after Katrina, Big Freedia is still making music that people displaced by catastrophe can dance to. Celebration is a radical act when the structures of our lives are falling down all around us. “It’s a means to freedom,” she tells me. “There’s a need for people to escape.”