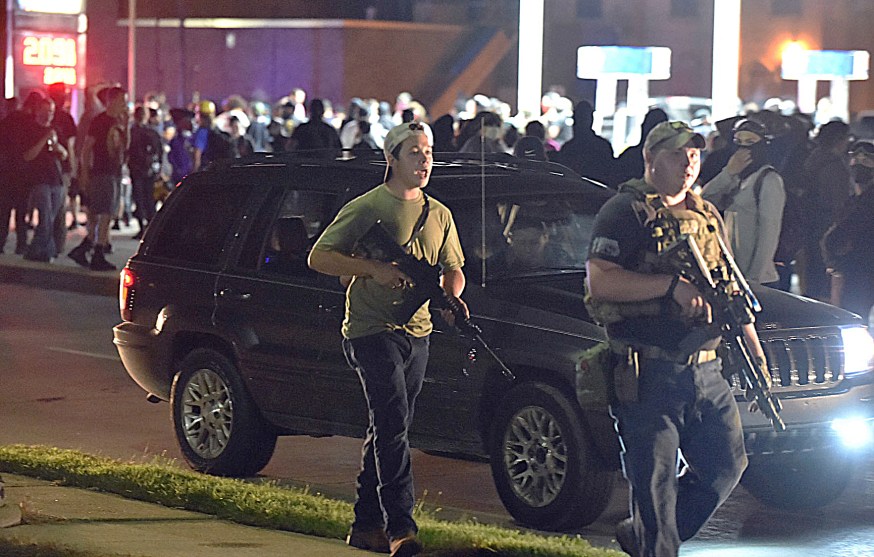 In Kenosha, Wisconsin, a 17-year-old dressed up in the regalia of the modern warriors he saw online—AR-15 style rifle, backward hat, jeans—to patrol a protest. Kyle Rittenhouse wound up shooting two people fatally and injured one more. Republican media has already spun this idea. He saw a lawless world in the uprisings of people demanding respect, they say. He was pressed into duty as a wannabe cop because the regular cops have been hamstrung, they say.

“Those in charge, from the governor on down, refused to enforce the law,” Tucker Carlson told viewers last Wednesday. “How shocked are we that 17-year-olds with rifles decided they had to maintain order when no one else would?”

This idea, of a vigilante maintaining order when he sees Black people rising up, reminded me of the birth of the Ku Klux Klan.

Like the Klan, today’s right-wing military groups are discreetly organized and wrapped in myth. They’re small organizations that gain power when they make national headlines, eager to throw open their doors to anyone looking for a home for his or her sense of grievance. And like the Klan, groups tend to spring up when politicians say lawlessness is rampant and someone has to do something.

To understand how racism is connected to a long history of right-wing paramilitary groups and vigilantism in the United States, I contacted Elaine Frantz Parsons. Her book, Ku-Klux: The Birth of the Klan during Reconstruction, traces the groups’ roots from bored, college-educated ex-Confederate soldiers’ purposefully silly club to invisible empire. “It is patently obvious that the purpose of the physical Ku Klux Klan was to promote white political, economic, and social interests,” she writes. “What is less obvious is that the same is true of the idea of the Ku Klux.” White racists—Northern, Southern, passive, active—realized the “Ku Klux label could serve their interests” in creating a national brand for rampant white-on-Black violence.

What’s been going on in Wisconsin—with paramilitary groups and right-wing, extremist militias attacking people—reminded me of some of what you discussed in your book about the Ku Klux Klan in post-Civil War America. Do you see those connections, too?

I suppose so, because you have these two elements.

I think another connection is that people perceive themselves as now being part of this national movement. Where before they might have had a private resentment—they might have been angry at a Black man who got a job or went to college that they hadn’t; they might have felt people were taking what was theirs—those things become solidarity with other people nationally who feel the same thing. You’re being told that what they’re doing is forming these militias. So you’re drawn to that same form.

In what ways did politicians then—like Trump now—foster a sense that people should be part of these organizations by saying we’re in a lawless country?

One way you could read what’s going on is vigilantism, right? If you have a perception that institutions are not acting in your interest, are not available to you, then one thing you can do is use private violence—particularly if you think that the public institutions have some sympathy for you. They can’t protect you. But they aren’t going to bring you down, either.

The person who wants to be a cop is acting like law enforcement as a vigilante fake cop.

Yeah. And so part of what happened then in the Reconstruction era was that the Southern whites were saying: “Okay, the North is temporarily on the side of free people and their allies. But we know that it’s natural for white people to be on the same side with each other. And so we think that if we keep on resisting this then, naturally, Northerners will end up not suppressing our violence—and sort of coming around to our side.”

You know, I’m saying this trying to describe what’s going on in the Reconstruction era. But I think it works very well for today as well.

In a similar way, local law enforcement officials are now seeming to forgive these actions, too. Did that happen during Reconstruction?

What are the major differences right now, then?

The difference is that now we have the internet, so they can be communicating with each other a lot better. The Klan, back in the Reconstruction era, it really was just local groups. But they were all doing the same thing; they were bound together by the press coverage.

The other big difference between what’s happening now and what was happening with the Klan is, depressingly, that the Klan is easy to suppress if the state wants to suppress it. Because it works by being widespread and shallow. Right? And so that’s really easy to infiltrate. Whenever the government has had any desire to infiltrate and stop it, it can really do it immediately. All you have to do is just go out and say, “Where’s the Klan?,” join it, and then bring it down.

They didn’t have to do much! In fact, they didn’t do much; they basically didn’t use the kind of force that some people think that they should have used to suppress the Klan. And yet the Klan was suppressed. But we don’t seem to be interested in doing that.

Those kinds of organizations can be extremely dangerous, though, when you don’t have an organized government which is willing to bring them down.

I’m curious if you could just walk me through what led to the emergence of the Klan, the flipside—and the basic steps of how media coverage sort of exacerbated what was a local chapter in Tennessee into a national problem.

So what happened in Tennessee is, you had a small group of men—it may really have just been one guy who was the editor and his friends—who were hanging out and made up this organization. He made it up creatively; he made it seem bizarre and interesting. (And he did it in a way that actually drew upon Northern tropes, drawing on stereotypes that were common in New York City on the stage at minstrel shows.)

Then people started to say, “Oh, like this is a Southern, mysterious organization? Maybe it is going to attack or it is attacking and intimidating Black people.” We don’t know the order in which this happened. The people who did develop it were incredibly racist—very resentful of Black people and their success. But it’s unclear whether they were told by the media that they might be an anti-Black violence group first or whether they first became an anti-Black violence group. But either way, people started saying, “Oh, what’s going on?”

Then the group started to get picked up (at the beginning of 1868) by the Northern press—particularly the New York City press, the New York Times and the New York Tribune (which was bigger than the Times). In all these kind of teaser articles: “What could it be?!”

People in the North started getting into it: dressing up like Klansmen, forming fraternities that were Klan themed, forming baseball teams that were Klan themed, putting them in advertisements. The Klan became trendy and cool. There was even a Yale supper club that was Klan themed. They were the Ku Klux and woe to the freshmen—they were going to put the freshmen through a really tough orientation as initiation. They were dressed as Klansmen and called themselves Ku Klux. And these guys—for what it’s worth—were actually Republicans. They were on the side against the Ku Klux. But it became this trend. People were bored. People didn’t understand the South. For the newspapers, it was sensationalism. It was interesting and mysterious.

Also, because white people nationally were extremely racist, they wanted to believe that what was happening to Black people was their own fault. The Klan give them a way to do that. The idea of the Klan was that it was just scary but not actually dangerous.