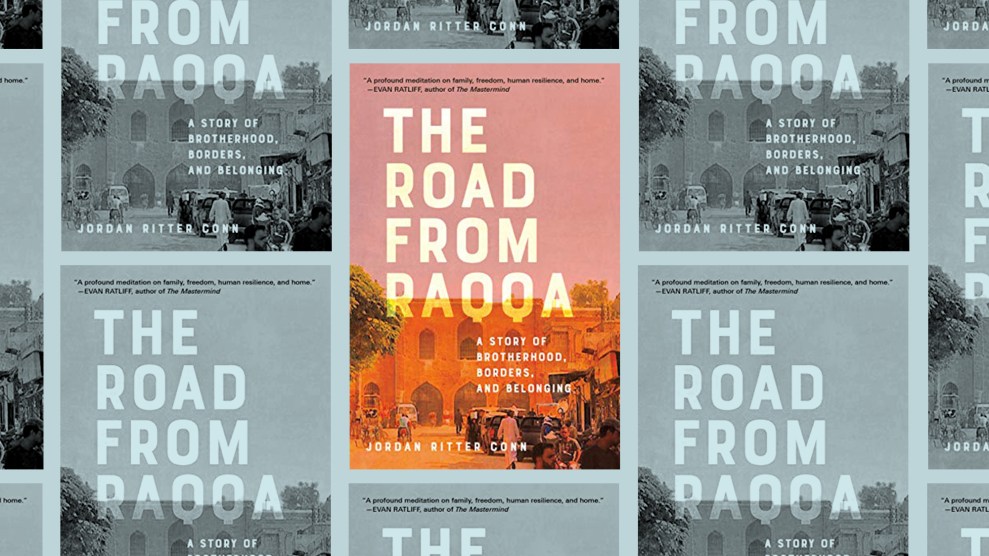 Back in 2015, Jordan Ritter Conn went to Turkey to report on a rebel Syrian soccer team for Grantland. There was one big problem: The reporter spoke no Arabic. He got a tip to go to a small restaurant north of his home city of Nashville, Cafe Rakka, and ask for the owner, who could help him with translation. There he found Riyad Alkasem, who was warm and charismatic and eager to be an intermediary in a conversation that involved challenging the Assad regime.

After the translation work was done, as the chef and the journalist hung out talking for hours, a much bigger story unfolded for Conn. “He was just the most fascinating person,” the writer recalls. “There are people who tell their own stories so well, it’s like they have a knack for all the little things—the little details, the descriptions of emotions, the descriptions of thoughts. Just sitting casually, he had all of that, and his story stuck in my mind.” Conn found himself swept up in Alkasem’s tale—how his ancestors founded the Syrian city of Raqqa, his youthful impulse to leave and start over in Los Angeles, and the way he found his way back to himself and his culture, in part by serving his native dishes in America.

His story deeply resonates with anyone who left home young, in pursuit of a better life, greener pastures—as one gets older, the pull of home becomes stronger. When Alkasem finally returns home, he finds that the Raqqa of his youth, the city that he still identifies as his home, can never be what it once was to him, not only because the city changed but because he has as well.

So much of the power of this tale is that it is not Alkasem’s alone. Conn tells the story of Riyad’s brother, Bashar—who chose to stay in Raqqa, at least until it was no longer safe for his family—in tandem with Riyad’s, setting up a sort of what-could-have-been foil. The resulting narrative in Conn’s recently published The Road From Raqqa is one that feels whole, even as the family becomes more scattered.

I called up Conn after devouring his book in two days, so that I could ask about his deep connection to the main character, Riyad, and hear more about how he reported this tale of brotherhood and home. Our conversation has been edited for length and clarity.

The way you were able to get into Riyad’s head—and Bashar’s, to a lesser extent—was so striking. Can you talk about what your interviews with them were like?

Riyad is an amazing storyteller. Bashar is somewhat more reserved, and the interviews with Bashar were largely translated by Riyad. Bashar and I had a few moments where we spoke in English, but he felt much more comfortable speaking in Arabic and having Riyad there to help with those interviews was really worthwhile. Sometimes I would send Bashar some written questions, which I paid a friend who’s Syrian and lives in Germany to translate and send to Bashar, and then Bashar would record voice memos answering the questions and send those to Riyad; then Riyad and I would sit together and he would translate for me.

“Navigating those trips back in which he saw so much of what he loved about that place while also experiencing so much of what pushed him away from it was really tough for him.”

That sounds like a lot of back and forth. Were you ever worried that either of the brothers was going to get tired of talking to you?

Yes, absolutely—especially with Bashar, because he is really reserved in addition to the language barrier. He doesn’t have kind of the gregarious energy of Riyad. Sometimes it would be really hard to make our schedules work because Riyad is constantly moving at the restaurant and doesn’t really get time to relax until later at night, and then Bashar is in Germany, so the time difference was pretty brutal. At times, Bashar would be up extremely early in the morning, or Riyad and I would be sitting really late at night.

At times, I was really worried about imposing. But one thing as a journalist that I learned through this is that it’s always, always good to go back for more—to go back and ask for more details and doing it in a way that makes it clear like, if this is too much for you, if you don’t feel comfortable with this, if you’re exhausted, if you’re sick of me, you’re more than welcome to say no, but I really think the story will benefit by just going over this one more time. And so I did a ton of that, but there definitely was that worry of, am I imposing? Am I taking too much of their time?

Riyad’s struggle to define his identity apart from the country where he was born felt so visceral for the reader. Did you feel that homesickness from him often in your interviews?

Yeah, I think there was a sense of longing. It often feels to me like the way he thinks of Syria and the way he thinks of Raqqa are two different things. He associates Syria with the regime, and even though he loved his time in Aleppo as a visitor and he really enjoys Damascus as a city, the longing is for Raqqa. He has this deep, deep connection to that specific city.

In the prologue to the book, I write about how Raqqa was founded [by the family’s forebears], and that lineage is so important to Riyad. He will tell that story anytime he has the opportunity to because he has such a deep sense of rootedness in that city. Navigating those trips back in which he saw so much of what he loved about that place while also experiencing so much of what pushed him away from it was really tough for him.

It makes me think of that scene in which an elder in Raqqa insists that a young Riyad learn how to make falafel and tahini from him before he goes to America, so that he can share that part of his culture, and Riyad is reluctant.

It’s funny you mention that because I think that’s part of the connection between Riyad and his wife Linda. She’s this woman from Tennessee who has just the thickest Southern accent and he is this man from Syria, and they’re meeting in California. She at that point lived in New York and spent time flying between Libya and Saudi Arabia as a flight attendant. And they were both kind of these wanderers who felt this deep affection for their home, but also felt this deep desire to leave it and to explore. And I feel like that was a big part of what connected them, the way they talked about feeling like they understood each other in ways that no one else ever had.

What do you hope the reader takes away from this story?

My instinct with that is to just say, I hope the story speaks for itself. As I was writing, the audience I had in mind, first of all, was Riyad and Bashar and their families. As a journalist, you’re taught so much about maintaining distance from your sources—I had to let go of a lot of that. For a few weeks, I would spend my evenings at the restaurant reading the draft of the manuscript out loud to Riyad, and that actually helped yield even more detail from him. These people—who did become my friends—were not the typical subjects of a story I would write for The Ringer. Maybe there’s some journalism professor out there who would disagree, but it was the choice that ultimately felt right to me.

“I really wanted those people to have a deeper understanding of the life of this man who cooks the food that you love and who welcomes you into his restaurant. He has so many more dimensions to his own story.”

I just wanted them to feel like their story was well told with respect to them and their experiences. I also have thought about what the people who encounter them would think after reading the book. I thought of how people in Hendersonville, the pretty conservative town where Cafe Rakka is, would react to it. There are people there who love this restaurant, who love Riyad’s warmth and sense of hospitality, but who have no idea about some of the experiences he and his family have been through. And so I really wanted those people to have a deeper understanding of the life of this man who cooks the food that you love and who welcomes you into his restaurant. He has so many more dimensions to his own story and his own experience and this is a chance for you to see the person who you encounter in a very specific context, to see what his life has actually been like beyond that narrow viewpoint.

In the South—well, it’s not just the South, but that’s the place where I see it—so often, white people will encounter someone from a different background and connect to them and even genuinely love them as an individual, would do anything for this person. But then they don’t connect that person they love to their really oppressive politics that could genuinely cause harm to that person and their family. Riyad would literally not be here if Trump’s travel ban had been in effect in the ’90s. I would love for this book to help people make that connection more explicitly.