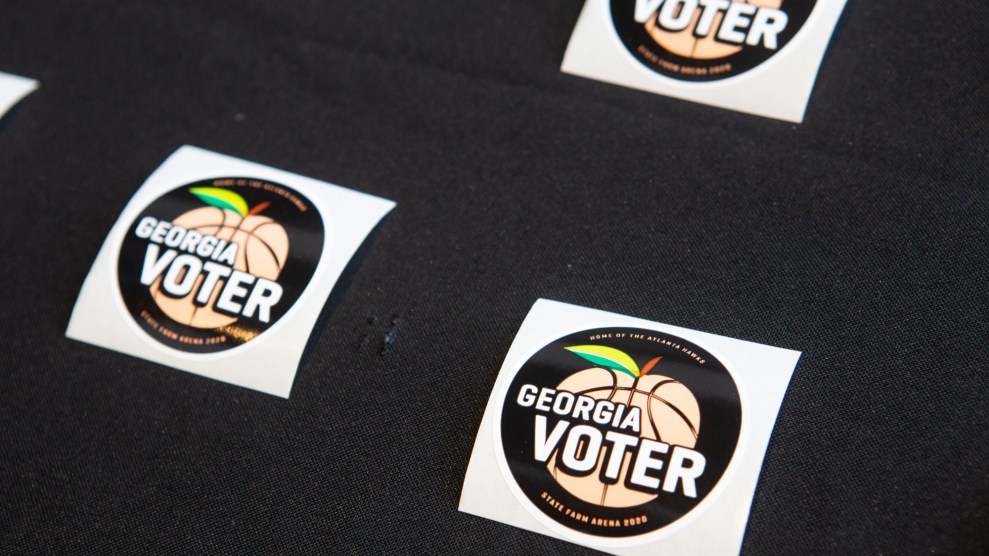 Late last week, the unexpected happened. After days of ballot counting, Donald Trump’s lead in Republican-dominated Georgia was dwindling. As Thursday night fell on the East Coast, the eyes of the state, and then the nation, turned to Clayton County, a liberal region of around 300,000 people on the south side of Atlanta, where votes were still being tabulated. Night turned to early morning, and in a squat concrete building aptly nicknamed “The Bunker,” the state of Georgia officially turned blue.

If you followed the ballot count coming out of Georgia, chances are you got some of your news thanks to Robin Kemp, who chronicled every update coming out of Clayton for almost 24 hours straight and provided some of the only live coverage of the area. Kemp lost her job at a local newspaper earlier this year after coronavirus-related budget cuts, but immediately went to work founding her own independent nonprofit news site, the Clayton Crescent, where her dogged election reporting garnered tens of thousands of followers on Twitter and national media attention. Now, her one-woman newsroom is proof of just how important local journalism is to American democracy.

I talked to Kemp (no relation to the governor) a few days after the madness—she managed to fit me in between watching the ballot count and covering Atlanta’s rapidly growing celebrations over Joe Biden’s victory—about her experience live-tweeting history.

First, could you walk me through the day at the ballot counting site when Biden finally overtook Trump’s lead in Georgia?

I went in at 9 am. I thought it was just going to be like a long, boring, nondescript ballot counting, and that I was going to take pictures of election workers rubbing their eyes and moving stacks of paper around and that was going to be all there was to it. And my goal was to document the process for my readers in this county. It turned into something else completely.

There was one badged observer—one person with a badge issued by the county under Georgia state election rules—who was there, but there were many, many other people who were there without badges. Their goal was to make their presence known to prevent the counters from doing anything untoward.

So I was there documenting the process of the ballot counting, and these people kept coming in and coming in and coming in. And I said, “damn, man, let me take these people’s pictures. They’re coming in, and we don’t even know who they really are. This is very strange.” So I started posting it to Twitter, because I figured this would be of interest to like five people, like other reporters around town. But I’ll be doggone, this thing went worldwide.

I personally have not witnessed any improprieties today in @ClaytonCountyGA. @GOP observers alleged unspecified “improprieties” and refused to give details to me and @ChristinaPlett when pressed. Also refused to say if they would file suit pic.twitter.com/2HZDQnkzYv

Around eight o’clock that evening, I get a phone call from some radio guy in England who wants to know, can I go on in a minute and do a live interview? So I did that, and came back in and took a look at the Twitter feed, and it was nuts. I mean, there were people going, “Thank you, thank you, thank you; thank you for being there; thank you for your service.” They were just grateful that somebody had eyes and ears on the count, because as it turned out—and I was not aware of this until I started reading the feed—everything had been focused on Clayton County in terms of whether or not Georgia would be flipping blue.

All told, how long were you watching the ballot count in Clayton County?

Thursday just before 9 a.m. to about 5:30 or 5:45 in the morning on Friday. I got an hour and a half for lunch while they were closed.

Tell me some about the impetus for starting the Crescent.

I did it because this is a big news desert here. I was literally—this is not bragging, this is this is the truth—I was literally the only person who was really seriously and consistently covering hard news in this county and I continue to be, although I’m ever so grateful for the crews that came down from the TV stations the other night. It was really nice to have some extra eyeballs in there.

Were reporters from the county paper also there watching the ballot count on Thursday?

They were not. They were AWOL.

Am I the one who is covering this on Twitter? Why, yes. Yes, I am.

So overnight you went from a local reporter with a start-up media company to the authority on Georgia’s vote count. What does that mean for the Crescent, and local journalism more broadly?

I had this little dead GoFundMe page for just the very beginning [of the Crescent]. Just reimbursing me for setting up the website and subscribing to plugins and email and whatever else I needed to do to get started. It didn’t meet its goal, but it was fine, like 1,200 or 1,400 bucks. My mom threw some money in there, some other people threw some money in there.

Thursday night, some guy, some dude out there in the ether found the GoFundMe and said, “Hey, you guys, she’s doing all this great local reporting, let’s see if we can help her out.” And people start throwing money in it. So one of my colleagues says, “Did you see your account?” I said, “No. Why?” So I take a look and it was over $8,000 in there. And I mean, my jaw hit the floor. When I checked it again, there was like ten grand in there; then there was 13 grand and then there was 16 grand. Today I looked and there’s almost $17,000. It’s insane. [Editor’s note: Kemp’s GoFundMe now has more than $35,000 in donations.]

The good news is, I can go to the board with this money and say “OK guys, we have this nest egg.” I hope this will get us over the hump so that we can hire a staff and have three or four other people out here doing this. Because covering this area requires that many people at a minimum and I think it will make all the difference in here. It has an impact when you have reporters who are watching what is going on; politicians behave better.

I cannot express how deeply grateful I am to everybody for their support and their kind words and certainly for the donations, which were completely unexpected. I hope that they would see fit to support independent nonprofit news in their own locations. And I hope everybody understands that this is why you need to pay attention to what is going on with your local government—it does matter. Ask questions of your elected officials, don’t let them put you off. This is your government. It doesn’t belong to them. You just lent it to them for a minute.

Dear World: I am here. Clayton is still counting. I am watching them.