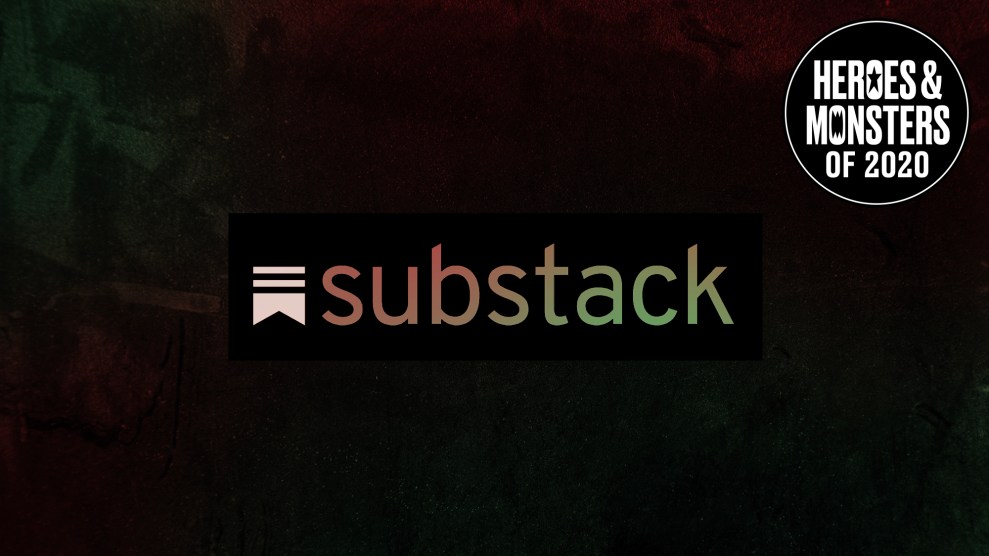 If you thought your journalism had value beyond entertainment, would you really be making it available to fewer people, unedited, mid-pandemic-depression? And only to people who can pay? Eat shit. Media’s Vizzinis—Greenwald (“unencumbered analysis!”), Squid Matt (“woke left!”), Mild Matt (“fiercely independent!”), penis-size correspondent Andrew Sullivan (if you must), the Singal guy—can’t hurt you by whining about “epistemic closure” from behind the gates of their influencer house. If the plague profiteers score a 10 for evil, these guys barely register. But they set a sad example: If you make it, if you’re really good, you start a hot-take OnlyFans. If I were being gracious, I’d say it raises questions about their values. If I were being blunt, I’d say it yields a pretty depressing answer. What the hell is wrong with you people?

And don’t lecture me about some kind of return to an industry norm. I couldn’t pay when I first got to this media thing, and I couldn’t pay before that. I have been unable to pay since I was this high, and one of the (so many!!!) lessons was to write for Team Can’t Pay only. Because the vast majority of people, certainly the people who most urgently need real news and maybe even decent analysis, can’t pay for your fucking Substack.

Yes, I know print news costs. I also remember reading the New York Times at the library. Sometimes a fellow Can’t Payer beat you to the crossword, but you could still stay informed, and we took advantage of that without fail. There was a principle at work here: Society is better off when media is free and widely accessible. For a time this more or less harmonized with the prevailing business model. Publishers didn’t sweat the low costs of news access because every added reader meant more eyeballs on the Sears ads, where the real money got made. But the old model has cratered, and the commitment to the ideal of widely accessible media is being tested.

There are no perfect answers (absent huge media subsidies), but some are at least better and more public-spirited. A lot of good energy in the industry is going toward creating subscriber-based media cooperatives. At outlets like The Brick House or Defector, gifted journalists are putting it on the line, navigating new routes through a mercenary economy. My outlet keeps my work free and still provides a good union job; I’m lucky, and there should be more. If you have to charge, charge for something with social utility—don’t funnel cash to the comfortable. It is not a coincidence that these co-ops make jobs for people who need them. It’s not a coincidence that they add color to the industry.

The pinnacle of this profession is to create something with others, something egalitarian, in the spirit of communicating valuable shit to the biggest cross-section of people you can. You acknowledge—just by taking part in any shared enterprise—that one of the things your colleagues do is check your bullshit, complement your gaps, and curb your worst tendencies. Your expertise, authority, access, or resources, such as they are, go toward common goals. It rules.

The alternative is called cream-skimming, an expansive term for screwing small fries. For public goods, it’s serving only the profitable users. In bank lending; it’s cashing in on the safest loans (from the best-off borrowers) and leaving everyone else with a worse pool of risk. In media, it’s trashing your colleagues and skipping town because editors are dumb and you’re smart.

If you’re already loaded and your work isn’t worthless, for God’s sake put it where people can read it. At least the clicks these guys got on their lil’ musings helped subsidize some good reporters. If, when we had the chance, this industry had fought for the kind of media subsidies you see in countries that are marginally less of a racket, maybe journalists wouldn’t be as depressingly outnumbered by bullies, grifters, and death merchants.

Through about the mid ’70s, the US looked poised to keep building out its patchwork social democracy. Then Bonzo and the Koch Youth hit the welfare state like a swarm of locusts, and the idea of adding public goods was out of the question. The unregulated globalization they wrought has been a petri dish for public and private scam-artistry; the quantity and variety of investigable bullshit has exploded everywhere. Just not the backing to unearth it.

Meanwhile, these voxholes want you to pay for what? These embarrassments felt censored? Get a real job, you reprobates. [It is not the policy of Mother Jones that anyone should get a real job.—Ed.]