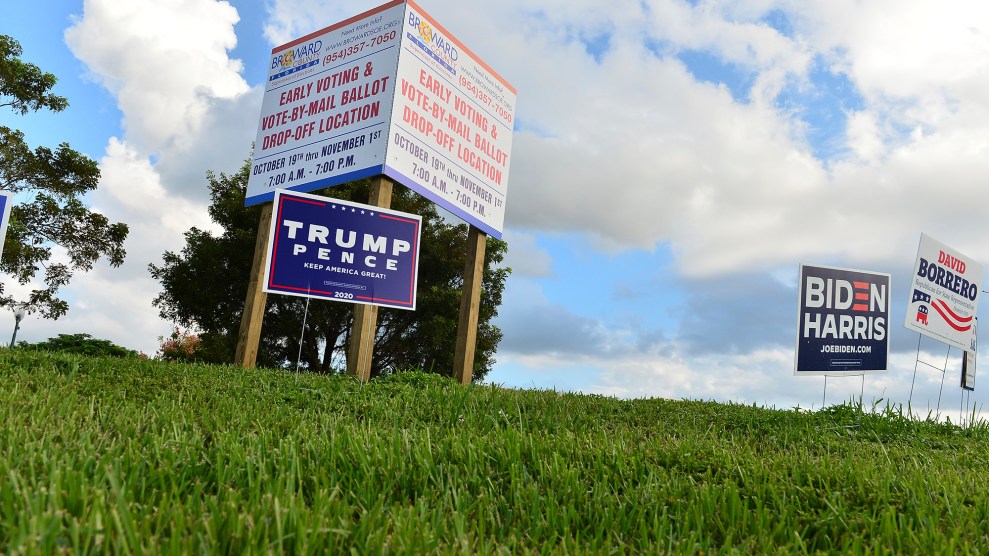 Biden and Trump campaign signs are displayed in front of a early voting sign as voters line-up to cast their ballots at the Miramar Branch Library on October 30, 2020 in Miramar, Florida. JL/Sipa USA/AP

Please do not speak to me of “Trump Country.”

Do not look at me, with your weary expression and your upper-middle-class lifestyle from your home in a comfortably liberal metropolis (you’ve never lived anywhere else, have you) and shake your head and say something to the effect of, “I just don’t understand why these people would vote against their own interests” down there in—sigh—Trump Country.

It’s become a convenient label often used in headlines—Mother Jones is not exempt!—but honestly, four years into this shit, we should all know better.

I am from Trump Country, the western Tennessee delta, and my little red neck gets real hot when you want me to wax elegiac about how backward that place is, how hopelessly ignorant and conservative and lost those people are, as if a state or county or zip code could ever define thousands of people’s political beliefs so neatly. “Country” is just that—country. The cotton fields in the county where I grew up do not have a political preference, nor do the soybeans or the pastures or the highways that connect little farming communities together like pearls on a string.

Perhaps unwittingly, the liberals who do this are invoking a set of fundamentally reactionary logics that tie politics to place. Think of the “blood and soil” slogan of the Nazis and of their alt-right heirs in Charlottesville. Think of the “Southern blood” cultists in the United States, with their biogeographical conception of national identity and race. The idea of “Trump Country” suggests the very sense of rootedness that ethnostaters are working so hard to cultivate, the sense that politics and ideology rise organically out of the dirt. One damn good reason to stop saying shit like “Trump Country” is that it’s the sort of thing Richard Spencer would say.

But you don’t want to hear about how my home county—the town is really not big enough to speak of on its own; I am from Crockett County rather than a town itself—held its first Black Lives Matter rally this year, and how it was well attended and peaceful. Y’all don’t want to hear about the Democrats I know who live there, or how a rural county next door to mine reliably votes blue every election, or about how the working class where I’m from is a vibrant community made up of Black people and Hispanic people and undocumented immigrants, or how those people are the economic backbone of the county—without them, there would be no Crockett County.

I should get down off my high horse here for a minute and clarify that in my youth, I was a snob, and despite my family history and my upbringing, I did not want to be a small-town Southerner. I conflated small-mindedness with geography as well, and I talked loudly and often about how I would not be like my neighbors, I was going to be somebody and move to a far-away city and never look back. Nowadays, call me a pillar of salt, because all I do is look back and wish I had not been so short-sighted myself.

Are there ideas and people that frustrate me back home? Absolutely. Is there racism and sexism and all kinds of egregious bullshit? Totally, but I’ve also encountered all the -isms here in the Bay Area; they’re just masked. But there is also fiery, passionate organizing happening in the rural South that gets ignored because it doesn’t fit neatly into a shoddy, shorthand caricature like “Trump Country.” If we’ve lost all ability to consider that people and places contain multitudes (it’s a cliché but it’s true!), then maybe it’s time to reevaluate what exactly we’re fighting—calling massive swaths of land “Trump Country” literally naturalizes a defeatist, useless vision of politics that writes off the people who live there, friends and foes alike. It concedes the thing we’re supposed to be contesting.