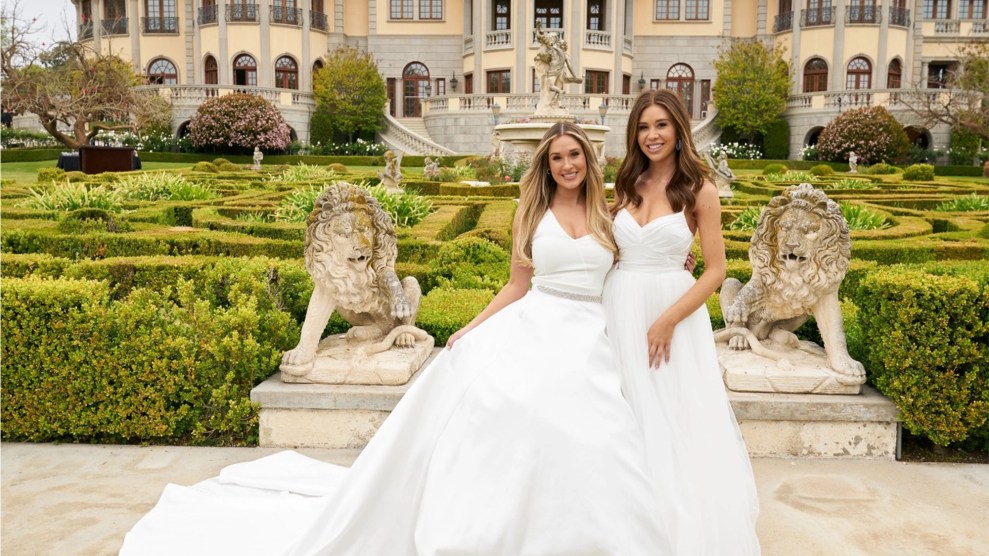 In the last few years, promos for the reality dating series The Bachelorette have featured covers of feminist anthems like Aretha Franklin’s “Respect” and Lesley Gore’s “You Don’t Own Me.” In one, the words “independent woman” flash behind the head of an incoming bachelorette. Another plays audio of the season’s bachelorette saying, “I know what I deserve.” The promos are the perfect encapsulation of girlboss feminism, pulling in viewers with the suggestion that the show’s lead is an empowered woman in control of her own love life.

But when the cameras actually start rolling for each season, the lead of The Bachelorette faces derision, humiliation, and disrespect from her contestants and the producers. For fans of the series, it’s a dynamic that’s become sadly familiar. “They can’t seem to get away from their sort of core, which has an inherently gendered power dynamic to it,” says Emma Gray, who co-hosts the reality television podcast Love to See It with Claire Fallon.

The Bachelor, launched in 2002, created the reality dating show genre as we know it, and it still wields enormous cultural influence; this year’s season finale drew 4.43 million viewers. Its gender-swapped spinoff, The Bachelorette, features a couple dozen men vying for the hand of one woman, who eliminates them one by one until she’s chosen a man whose proposal she’ll accept in the season finale. It’s a format in which heterosexual marriage is prized as the ultimate goal, and unsurprisingly, the franchise has attracted plenty of criticism for its long history of misogyny and racism.

2021 seemed to herald some progress for the franchise; the year brought its first Black bachelor and first two Black couples to get engaged. For the first time, the final four contestants on The Bachelorette were all men of color. But when it came time for the show to choose its 2022 bachelor (typically selected from among The Bachelorette’s finalists), the producers picked Clayton Echard, a white man who was eliminated before the final four group was chosen on the previous season. Many fans were disappointed.

The trend away from progress continues with the current season of The Bachelorette. After contestants Gabby Windey and Rachel Recchia had their hearts broken by Echard, they were chosen to be the co-leads of The Bachelorette, the first time the franchise has featured two leads for an entire season. Promotional material focused on the female friendship aspect, which Fallon says feels like an attempt at rebranding for the show. The initial promo described them as “two best friends” and had a caption that suggested the season would focus on female solidarity: “After unwaveringly supporting each other through a devastating dual breakup in the season 26 finale of ‘The Bachelor,’ fan favorites and fierce women Gabby Windey and Rachel Recchia stand by each other’s side yet again.” It seemed to promise a change for the franchise, which usually only features two women when they’re being pitted against each other, competing for the affection of the same man. But far from signaling a feminist rebrand, the addition of a second bachelorette quickly proved disastrous.

This season, in its attempt to be historic with two leads, has largely stripped the women of the power they might have had.

The show’s problems were baked in from the beginning. With the series’ typical format thrown out the window, men had the ability to pursue either or both of the bachelorettes for the first part of the season. Rather than competing to impress the two women, contestant after contestant rejected them. One man, for example, told Windey she was “rough around the edges,” while another said he wouldn’t stick around if she were the only bachelorette. As the hurt feelings mounted, the show’s producers changed approaches. Midway through the season, the men were split into two groups: If they accepted a rose from Windey, it meant they would no longer pursue Recchia, and vice versa. But at the rose ceremony, three men rejected Recchia, publicly saying they wanted to pursue Windey instead, and leaving Recchia in tears.

Even after the men divided into two groups, contestant Logan Palmer came to host Jesse Palmer to tell him he wanted to switch to pursuing Windey instead of Recchia. Rather than let her in on the secret, producers allowed Recchia to keep him on the show until the following week, when they could catch her blindsided reaction on camera.

This season, in its attempt to be historic with two leads, has largely stripped the women of most of the power they might have had. Now that there are two of them, the men are empowered to reject the leads like they never have been before—and despite those early promos, the show once again seems intent on forcing women to compete with each other.

As Fallon notes, the show could’ve had a more clearly defined structure when it came to having two bachelorettes, but instead chose to focus air time on Recchia’s sobbing. “I do think the thing that’s been hardest to watch is the way that they sort of take advantage of these moments to create emotional public situations for the women to be rejected in and to cry and to feel not enough,” Fallon says. The independent Instagram account @bachelordata, which analyzes data from the franchise, backs up Fallon’s belief that the show is focusing on Recchia and her sadness. According to the account, Recchia consistently receives more screen time per episode, with a seven-minute gap between the two women’s cumulative screen time by episode six.

However, as is often the case for the lead of The Bachelorette, there’s a good reason for Recchia to be sobbing. Contestants on The Bachelorette have always been far crueler to the lead than contestants on The Bachelor. In both shows, one contestant typically emerges as the villain, antagonizing the other cast members. On The Bachelor, the villain is often a woman who causes drama among the other female contestants. But on The Bachelorette, it’s usually a man who has said something “deranged” and “misogynistic” to the lead, says Gray of the Love to See It podcast. “​​If you’re going to piss off some women, who cares, they’re just women,” Fallon says, summarizing the attitude that seems to dominate on the franchise. “I think even women are socialized to have that attitude.”

In 2019, for instance, contestant Luke Parker slut-shamed bachelorette Hannah Brown by telling her he couldn’t be with her if she’d slept with any of her other suitors, then refused to take no for an answer when she eliminated him from the show. The following season, Yosef Aborady told bachelorette Clare Crawley that he was “ashamed to be associated” with her and that she was “not fit to be a mother” to his child. The top comments on the show’s official YouTube video of the exchange are nearly all in praise of Aborady.

“I think just because you reverse the gender of the lead, and have a woman picking rather than a man, it doesn’t mean the sort of more conventional, heteronormative assumptions about gender are being abandoned; they’re just being cast into a different environment,” says Moya Luckett, a media historian who teaches at New York University. She sees The Bachelor franchise as embodying a sort of girl-power feminism. The franchise, to Luckett, is an “updated version of the conventional heteronormative ideal,” in which the men have the power and assume that the women will be on the show solely to pursue them.

Even as it tries to adapt to changes in the dating world, The Bachelor is “also reinforcing and playing to anxieties that have shaped the 21st century about finding somebody that’s right for you in a world where expectations are high and people are encouraged to shop for partners,” Luckett says.

The Bachelorette is still trying to feed viewers the idea that it’s feminist; it’s time to stop believing that’s true.

Where does this all leave longtime fans of the franchise? Some have begun to watch other reality dating shows, but the misogyny and mistreatment of women is rampant in most of those as well. Contestants on Love Island were so misogynistic this summer that thousands of viewers wrote in to Ofcom, the United Kingdom’s regulatory and competition authority for the broadcasting industry, to complain. Many viewers were troubled by the behavior of two contestants who bullied one woman for cheating on her partner—even as they celebrated him for doing the same thing. Notably, the definition of “cheating” on Love Island is notoriously blurry, and the female contestants on the show are typically held to a much higher standard than men.

Of course, The Bachelorette is not the beginning or the end of the problem of misogyny in the entertainment world, but rather a reflection of larger issues. Many men on these shows behave just the way they would in real life, sometimes even worse. The mistreatment of women in the genre of reality dating is so ingrained and pervasive that many viewers, including me, have simply come to expect it. And despite the show’s recent marketing efforts, with each season it gets more and more difficult to hold on to the belief that the series will get better. The Bachelorette is still trying to feed viewers the idea that it’s feminist; it’s time to stop believing that’s true.