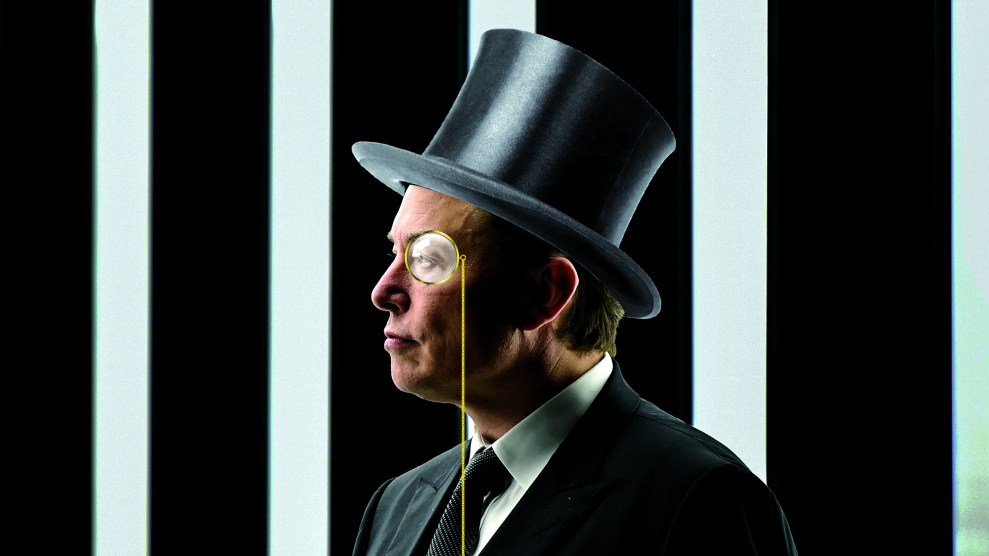 Before you Twitter pundits start writing Elon Musk’s obituary, I think we need to have a little talk.

I mean, sure, it’s true that about a year ago, Elon—we normally use last names at Mother Jones, but only for adults—became the first human being ever to exceed $300 billion in net worth. It’s also true that, as of Friday, the poor fellow was down to just under $200 billion, according to Forbes’ Real-Time Billionaires List. (Yes, that’s a thing.)

Losing a third of one’s wealth seems like a huge blow, although not if you were to compare it to the plight of Sam Bankman-Fried, who had a way worse week than Elon and all the Twitter employees he just laid off.

Bankman-Fried, a major Democratic donor—actually, let’s just call him Sam—is the founder of FTX, a major cryptocurrency exchange that went up in flames this week, tanking his fortune from about $16 billion to roughly zero in a few days.

This implosion was the result of a Succession-worthy power move by Changpeng “CZ” Zhao, the CEO of rival cryptobank Binance, which forced FTX into bankruptcy. The Machiavellian drama naturally played out on Elon’s Twitter—in which Zhao, who is Canadian, has reportedly invested $500 million. Binance also held a big stake in FTX up until last Sunday, when CZ precipitated his rival’s demise by tweeting that Binance was going to dump its remaining FTX holdings.

As part of Binance’s exit from FTX equity last year, Binance received roughly $2.1 billion USD equivalent in cash (BUSD and FTT). Due to recent revelations that have came to light, we have decided to liquidate any remaining FTT on our books. 1/4

But wait! This post is supposed to be about Elon, whose assets, however distressed they may seem at the moment, still add up to nearly $200 billion. (And that’s just the assets Forbes knows about.) So, what does $200 billion actually look like?

While researching my book, Jackpot—which examines how upper-tier wealth in the United States has gone completely off the rails—I sat down with UC Irvine psychologist Paul Piff, who studies wealth and behavior, to play a friendly but rigged game of Monopoly. I wrote about this in The Atlantic, but here’s the part I want to highlight now: I’d proposed we set up the game such that…

Now picture a similar game, but one that pits Elon against a typical middle-class American—call ’em Average Pat. And let’s make it so the amount of cash each player starts the game with reflects their relative holdings in real life. If Average Pat gets $500, as above, how many Monopoly sets will we need to play? Let’s do the math!

If Average Pat plays Monopoly with Elon Musk, and they each start the game with a sum corresponding to their net worth, they’ll need a heckuva lot of Monopoly sets.

As of September 2022, according to a real-time inequality tracker put together by UC Berkeley economists Emmanuel Saez, Gabriel Zucman, and Thomas Blanchet, average real wealth for a middle-class adult (50th-90th percentiles) is $385,500—which I’ll round up to $386k. (Keep in mind that average wealth figures are much higher than median figures, which this database did not include, because of the way wealth multiplies as one moves up the ladder.)

Math is too fun to just stop there. Walmart charges $17.77 plus tax for a standard Monopoly set. Which means if Pat wants to invite Elon over to play, they’ll have to spend $223,707 (58 percent of Pat’s net worth, not including sales tax) on game sets. (You can buy Monopoly money separately, but humor me. And by the way, did you know Monopoly has anti-capitalist origins. It’s true! I wrote about it here.)

Anyway, a standard Monopoly set comes in a box 333 cubic inches (0.19 cu ft) in volume, and 12,589 such boxes take up 2,424 cubic feet. The ceiling height in Pat’s suburban home is a fairly typical nine feet, and Pat’s living room measures 15′ by 18′. Which means those Monopoly sets will fill every last bit of Pat’s living room, floor-to-ceiling.

What happens if we take Elon’s play money and spread it out? A Monopoly bill measures two inches by four, so that’s 8 square inches, and there are 210 bills included per set. I’m ballparking here, but Elon’s trove would contain roughly 2,643,546 Monopoly bills, which, when we convert the units, would cover 146,864 square feet. A football field, including end zones, is 57,600 square feet, so Elon’s stake in the game will paper over more than two and a half football fields.

Let me repeat that for effect: Twitter is imploding as we speak, yet still Elon Musk’s wealth, converted into $100 bills, will completely cover 3,864 football fields—including the end zones.

This world has truly gone mad.

Update (Nov. 12, 2022): I revised my initial calculations to eliminate rounding, and ended up with six more football fields than previously reported.