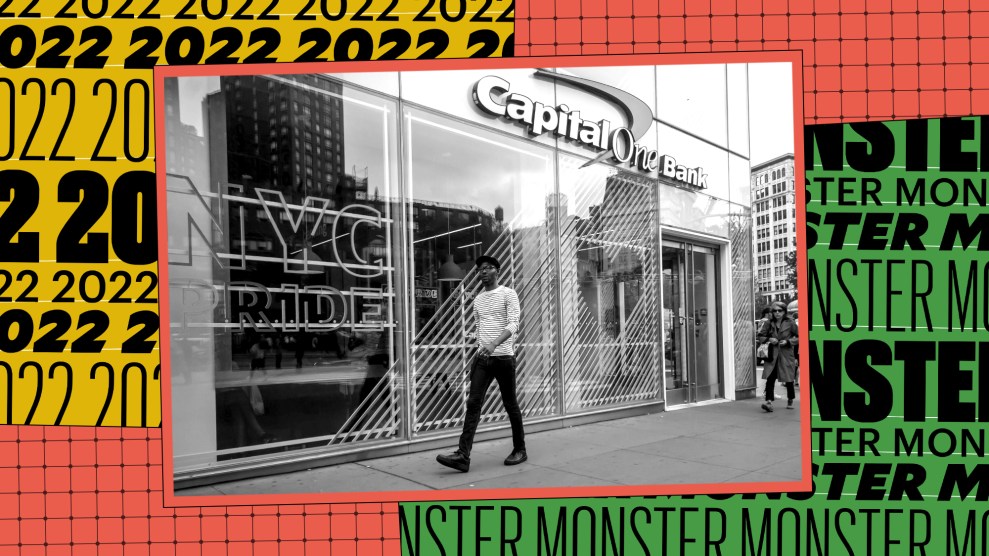 The Capital One Café in New York City’s Union Square is hesitant. I suspect that it’s not fully committed to its performance. On Google Maps, it is labeled as a Capital One Café but the exterior simply reads “Capital One”—no mention of a coffee shop. When you walk inside it just looks like a Capital One Bank with a Peet’s Coffee affixed to it. Two attendants inside standing with laptops at a long table—underneath a series of separated glowing signs that read “Welcome,” “to a new,” “way of,” “banking”—nodded  when I asked if this was indeed a Capital One Café.

“There’s like not a sign on it though, right?” I continued. “It just says Capital One, no ‘Café.”

“It’s a Capital One Café” she assured me.

It can be hard to literalize how financialized capital has overtaken our lives. I figured coming to Capital One Café might help. The existence of which offers, if not a simulacrum, an indicative example: It is not enough for an average chain coffee shop to exist—it must also be literally vertically integrated into a bank.

I didn’t want to bother the attendants anymore so I stepped over into the Peet’s Coffee wing and ordered a medium coffee. The barista shook her head when I asked if they had any special Capital One drinks. Again, I decided to shut up before causing any more problems. I paid with my hefty, metal millennial-focused grouped Capital One credit card to earn the discount bringing my coffee to an early 2000s price of $1.80 after tax.

As I sat down, I messaged my editor, Jacob Rosenberg, on Slack to let him know “i am in capitol one cafe [sic].” He replied: “Please note in your article I did not require this. I did not ask you to do some gonzo journalism. You’re a sick freak and did this to yourself.” I looked up. I was the only customer.

It is difficult to construe just what the Capital One Café is. Perhaps it’s a retaliatory shot in a turf war with Starbucks over the coffee chain encroaching on the lucrative banking business. Maybe it’s a play at the combination Pizza Hut and Taco Bell model, but savvier in that it does not cannibalize the business with which it shares a roof.

I first became aware of Capital One’s plan to break into the java business in 2017. I read that they were closing the one Fuddruckers within Washington, D.C.’s city limits to make space for a Capital One Café—presumably to go with the new name of the Capital One Arena across the street. The metaphor felt too on the nose to be real. In a moment of low-interest rates, accelerating the financialization of everything, normal chain restaurants that had been scaled to meet shareholder demands for unending growth were not good enough to stay open. The burger chain had to be replaced by a financialized coffee shop.

It is not enough for an average chain coffee shop to exist—it must also be literally vertically integrated into a bank.

Others, eventually, trickled into my shop. A man sat down next to me and studiously examined the terms of the Capital One’s wifi before he logged on. A group of security guards that appeared to be unaffiliated with Capital One sat in their own corner near the entrance, charging their phones.

The Capital One Café had been designed for efficiency and productivity. There are almost no tables for anyone to gather. Instead, most of the seating was individual; a chair facing the wall or a window, each with its own outlet. The interior is accented with wood, or at least something designed to look like it. The room had a certain Marriot lobby chic, but a bit more sterile.

The second floor of the branch breaks from its efficient downstairs. Upon first glance, it appears orderly. On closer examination it is nonsense. Look at this picture from Google Maps. (I, a man of color, was not about to start taking my own pictures of the inside of what is technically a bank).

This is not an interior, this is a simulation of an interior. The hard, artificial floor surface abruptly stops to make room for a built-in square carpet. What happens in this room? It is not clear why there needs to be two types of fixed floor surfaces. A screen of pixelated, colored gibberish the size of a wall extends over the room, breaking into fragmented pieces. Chairs are arranged in a manner that cannot be described as anything other than evil. A rectangular prism sits in the middle, too far from any seat to be useful. There is nothing anyone can do seated, facing one another, at that distance. Examine the picture closer. Look to the far right. Why is there a man with a cowboy hat and giraffe pants? He seems to confirm that this is indeed only a liminal space between our world and other planes of reality.

This Google Maps picture of a San Jose location raises a separate set of questions:

Different stations within the Capital One Café are labeled with augmented reality-like text as though you’re stepping into an elaborate alternate reality game (ARG). One, “check your (inner) balance,” suggests that Capital One has at least some awareness of the game it is playing, confirming that the financial self is indistinguishable from the actual self.

An image on the San Jose Capital One’s Google Map posted by the company itself gives a little insight into what it’s trying to do:

In the image, a multiracial group of Millennials™ socialize with coffee while a money coach (Capital One’s term) helps educate a person by showing them a presentation that suggests “Bike Sharing,” in which “Your unused bike earns money.” The woman’s head breaks up the second part of the sentence, but it looks like it reads “while the person renting it spends more/less than the cost of a bike.”

Born too late to own property. Born too soon to be a teen Tik Tok star. Born just in time to become a rent-seeking bike landlord.

“Feeling mysterious… Just might be.” This is not a reference to a meme, or as best as I can tell, to anything. It’s probably just sloppily written copy, but feels unhinged all the same, especially in the context of everything else.

Another cryptic Instagram post portrays a Capital One Café as though the software for its simulation is glitching:

A warning from deep within the Capital One Café simulation program to stay away?

Capital One corporate actually does aspire for its Cafés to be a space crossing between ours and virtual capital. In a statement to the University of Chicago’s student paper, a spokesperson aspirationally described Capital One Cafés as “blending the physical and digital worlds.” In the way that Uber Eats has turned restaurants into a website, as another UChicago student writer Andrew Farry puts it, Capital One Cafés have turned a website into a physical place: “an uncanny disembodiment” in which “digital capitalism seeks to render the consumer’s body superfluous.”

In this sense, the Capital One Café does not exist. It is a simulation of a cafe. I’m not a Jean Baudrillard scholar, but it sounds like stage three of his four stages of Simulacra and Simulation, which the French philosopher says  “masks the absence of a basic reality.” The Capital One Café acts as though it’s a new, isolated, and specific integration of a normal part of our lives—getting coffee, and working from coffee shops—with finance. The Café conceals that this is just already our entire world.

After two hours of sitting in my productivity station, I had enough. I got up to use the bathroom and leave. But it was locked.