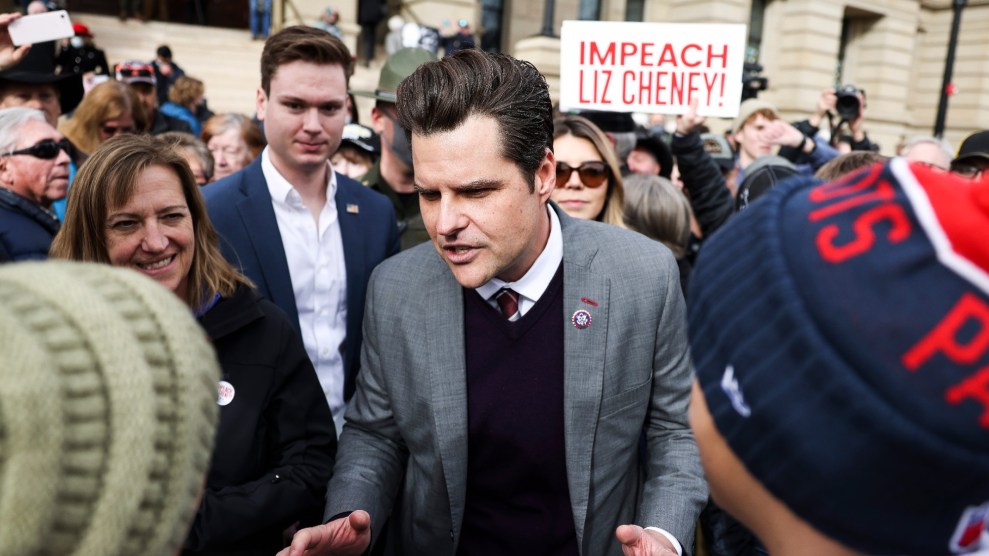 Rep. Matt Gaetz (R-Fla.) thinks cancel culture has gone much, much too far. Though the definition of cancel culture is extremely elastic and typically only deployed in bad faith attacks, Republicans have created a vast ecosystem of complaining about the horrors of liberals “canceling” others for the crime of merely speaking their minds. But the term is so thrilling, it has now morphed into canceling a conservative who dares to have a different opinion or, apparently, when Democrats demand accountability for inciting an insurrection. If Donald Trump, as the president of the United States, can’t incite a deadly attack on the Capitol after lying for months about the election being stolen from him without being canceled, are any of us safe from cancellation?

As Gaetz tweeted about a proceeding that is designed to hold presidents accountable for crimes and is enshrined in the Constitution:

Impeachment is the zenith of cancel culture.

Then, just three days after lamenting cancel culture run amok in those seven, eloquent words, Gaetz boarded a plane to excoriate one of his Republican colleagues for having the nerve to disagree with him, and, of course, the former president.

Earlier this month, after then-president Donald Trump encouraged a mob of his supporters to storm the Capitol building, Rep. Liz Cheney (R-Wyo.) joined nine other members of her party and voted to impeach him. To Gaetz, who presumably loves the marketplace of ideas that has been so undermined by cancel culture, Cheney’s vote was beyond the pale. So he decided to take the battle to Cheney’s home state.

Rep. Matt Gaetz: "This is my first time in Wyoming. I've been here for about an hour and I feel like I already know the place a lot better than your misguided representative, Liz Cheney." pic.twitter.com/ZncWZSJWeH

Other Trump loyalist GOP House members, like Rep. Jim Jordan (R-Ohio), had already begun making moves to do their own Congressional version of canceling the third-term Wyoming representative. They attempted to strip Cheney of her leadership roles in the party soon after the House voted to impeach Trump a second time. But a Florida representative flying across the country solely for the purpose of rallying against his colleague for breaking with Trump is absolutely farcical. And alas, this transparently hypocritical move probably won’t inspire Republicans to stop complaining about cancel culture. But it’s extremely instructive in figuring out what cancel culture really is: Basically anything Matt Gaetz doesn’t like.