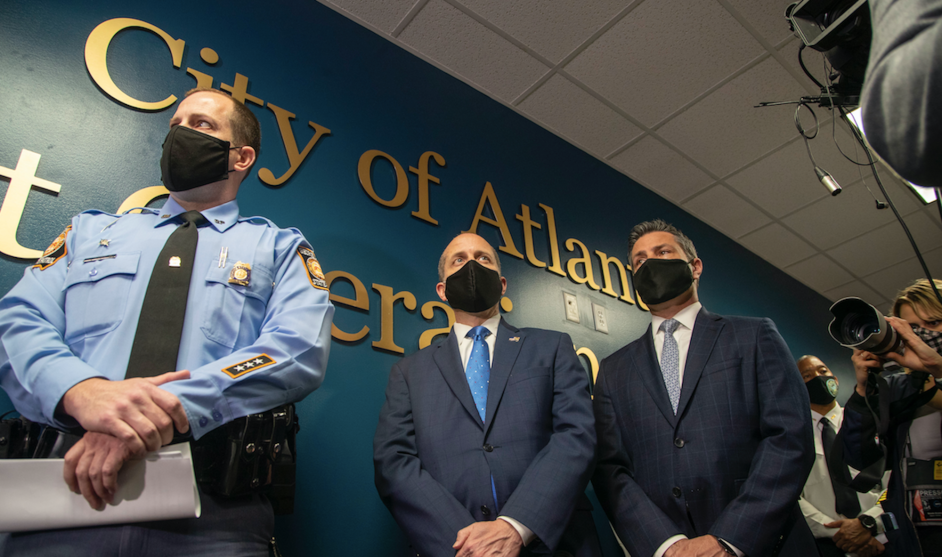 On Tuesday night, a 21-year-old white man walked into an Atlanta-area massage parlor where he opened fire and killed four people. From there, the white man entered two similar businesses and killed four more people, prompting a massive police manhunt that eventually led to his arrest. The death toll from the rampage included six Asian women, a critical fact that raised fears of a racially motivated hate crime.

But, not long after most of the country awoke to learn of the horrific details, law enforcement officials on Wednesday appeared intent on focusing on a different narrative. After the arrest, the suspect had “made indicators that he has some issues,” Cherokee Police Sheriff Frank Reynolds told reporters in a press conference, potentially a “sexual addiction.” Reynolds said that officials believed the suspect had “frequented these places in the past and may have been lashing out” in order to get rid of a “temptation.”

Though officials acknowledged that the murders had occurred during a surge in anti-Asian violence across the country, that felt mostly like a footnote attached to the emphasis that it was still too early to make the determination that a hate crime had taken place. The logic appeared largely, if not solely, rooted in the suspect’s claims to police that his decision to kill six Asian women had not been motivated by race. Soon after the presser ended, the Cherokee police department issued the following statement:

New: Cherokee Co. Sherrif’s Department out with a statement. They say they interviewed the alleged shooter in Atlanta last night and he said it wasn’t about race…it was about his blaming women at these parlors for his addiction to sex. pic.twitter.com/lF766mj2IT

To an Asian American woman watching from a distance, the admonishment not to rush to assume racist elements strikes me as perplexing. The alacrity with which the police have released information heavily intimating that this has more to do with sex, specifically the sexual frustrations of a white man, feels obscene. One can be cautious about what caused a man to kill people while still acknowledging that watching people who look like you die for no reason looks exactly like what it is. But law enforcement officials made a specific choice in ignoring that and echoing the words of a killer. And their stress for caution before labeling Tuesday’s murders as racially motivated—while foregrounding the potential sexual nature of the investigation—runs the risk of falsely treating misogyny and racism as if they’re mutually exclusive, when in fact, overwhelming evidence has shown that the two toxic forces are often interwoven. The fact that Asian women make up 70 percent of the recent rise in anti-Asian attacks is further proof of the parallel traumas. In the case of Asian sex workers, there’s really no separating the inherent racism rooted in a white man’s assertion that “sexual addiction” prompted him to commit violence.

The alacrity with which the police have released information heavily intimating that this has more to do with sex, specifically the sexual frustrations of a white man, feels obscene.

Time and again, that dangerous instinct on ignoring the full picture has proven effective at minimizing how acute violence lays bare the rot of racism and sexism generally. You see it exposed, excruciatingly so, right there in the language Georgia police officials used to describe Tuesday’s murderous rampage, or as they called it, an act of “lashing out” to eliminate sexual urges. (A familiar predicament for all men, right?) Law enforcement officials even went as far as to reduce the murders as a “really bad day” for their suspect.

As for the women who were murdered, they’ve already been tarnished by a flood of abhorrent jokes on social media about Asian sex workers. They did not get the full humanity of having a “really bad day.” By pressing the potential sexual undertones of Tuesday’s rampage, it’s not a stretch to imagine that the strange performance by Georgia police officials will further fuel the grotesque instinct to crack such jokes amid a tragedy.

“We are not about to get it into victim blaming, victim shaming here,” Atlanta Mayor Keisha Lance Bottoms responded after a reporter asked if sex work took place at the targeted businesses. “We don’t know additional information about what his motives were, but we certainly do not begin to blame victims.”

Well, some of us aren’t.