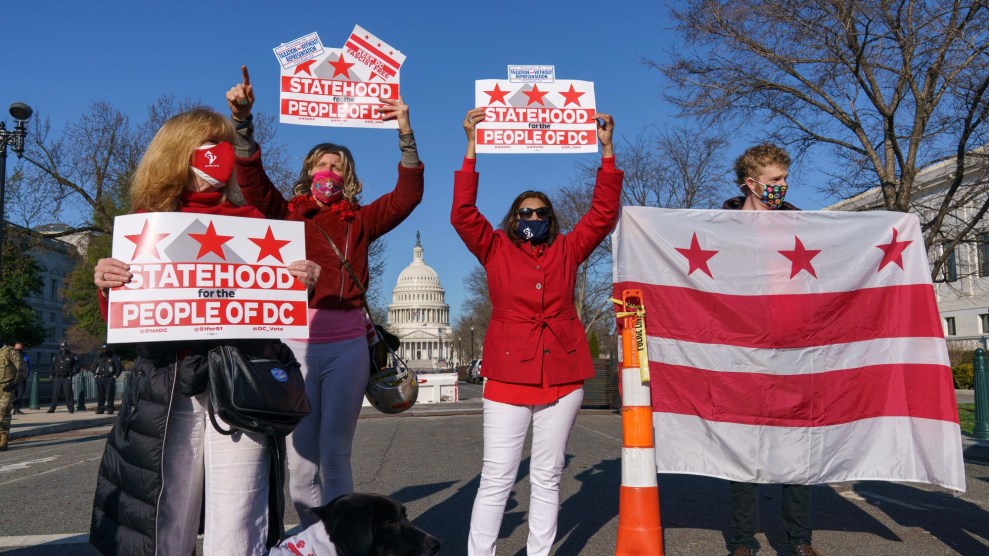 For the second time ever, the House of Representatives has passed a bill that would make Washington, DC, the 51st state. The bill, HR 51, which would finally give the more than 700,000 DC residents full voting representation in Congress, passed in a straight party-line vote of 216–208.

Democrats’ latest move in Congress puts DC statehood closer to reality than it has ever been. Even after the bill passed in the last Congress, the Republican-controlled Senate ensured it didn’t get anywhere near the Senate floor, not even for a committee hearing. But with Democrats holding a slim majority in the Senate, DC statehood advocates are hopeful that the bill might at least get a fair hearing in the Senate this time around, even if moderate Democrats in the chamber stick with rules that would allow Republicans to filibuster it from becoming reality. Though most Democrats, including President Joe Biden and Vice President Kamala Harris, support statehood, overall support for it isn’t as enthusiastic, according to some of the latest polls.

HR 51 was introduced at the beginning of the year by DC’s longtime nonvoting House member, Rep. Eleanor Holmes Norton, who has championed statehood for the entirety of her three decades in Congress. Since then, the bill has entertained vigorous debate in House committees. Statehood has long been a racial justice issue, as the district is a historically Black city and its federal designation has long disenfranchised hundreds of thousands of Black residents from having a vote in Congress. House Democrats have argued that HR 51 is a way to correct this disenfranchisement. But House Republicans have rebutted this argument, coming up with all kinds of different objections to statehood—sometimes wild and nonsensical—in an attempt to shy away from the fact that giving DC residents representation is, at its core, a voting rights issue. “Congress has both the moral obligation and the constitutional authority to pass H.R. 51.,” Norton said in her comments to the House before the full vote.

Now that DC statehood has overcome its first hurdle in the House, it’s heading to the Senate. While it’s more likely to come up for some level of discussion than the last time the House passed a similar measure, it’s unclear if it’ll make it to Senate floor this year for a vote, as Democrats are prioritizing plenty of other bills in the air at the moment, including Biden’s infrastructure plan. And the bill still needs to find support from some moderate Democrats in the Senate who’ve been coy about their support for DC statehood, including Sens. Joe Manchin (D-W.V.), Kyrsten Sinema (D-Ariz.), Mark Kelly (D-Ariz.), and Jeanne Shaheen (D-N.H.), if it has any chance of a floor vote.