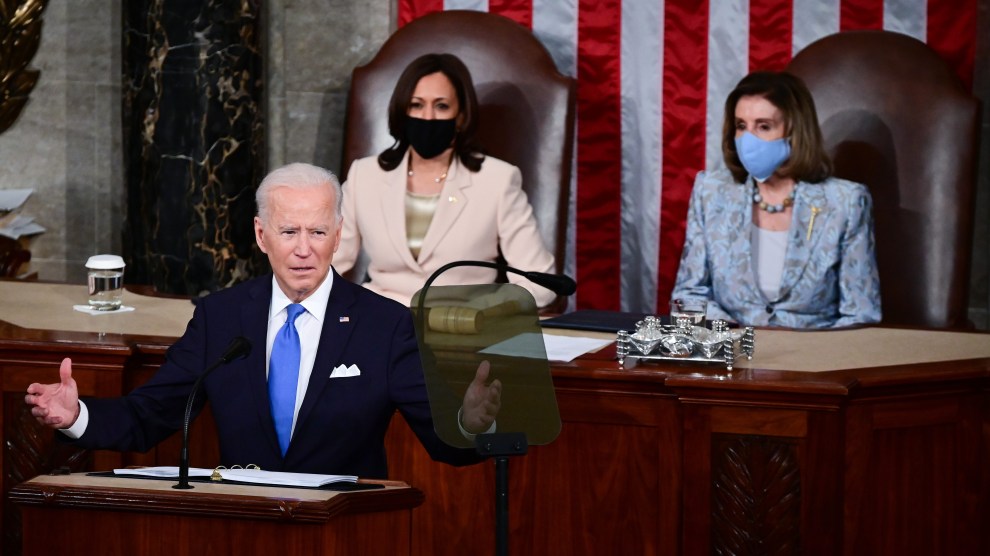 In his Wednesday night address to a joint session of Congress, President Joe Biden made a quiet but sustained case for a different sort of American economy. He called on lawmakers to pass major pro-union legislation and recast the fight against climate change as a matter of more jobs for Americans. Going by his prepared remarks, Biden said the word “jobs” 43 times in all.

As with all things Biden, the speech seemed intended to evoke a nostalgia for the New Deal; and as with all things Biden, it did so tamely—even, yep, sleepily. The middle section of the speech was a recitation of familiar policy proposals that, taken together, amounted to a radical rethinking of the role of the government in people’s lives. It was revolutionary stuff, presented as dully as possible—the New Deal on Ambien.

Biden advocated for the passage of the Protecting the Right to Organize Act, which would make it more difficult for employers to discourage unionizing. He called for the Paycheck Fairness Act, which would help ensure gender equality in wages. He called for climate change solutions that amounted to, as he said, “jobs, jobs, jobs.” He also called for increasing the minimum wage to $15, Democrats having failed in their efforts to do so via the $1.9 trillion pandemic relief package passed last month.

The American Jobs Plan, his proposed economic recovery act, would seek to employ Americans building green infrastructure to fight climate change. “There is simply no reason why the blades for wind turbines can’t be built in Pittsburgh instead of Beijing,” Biden said.

The era of big government is far from over, he seemed to be saying between the lines. Pushing his potentially groundbreaking progressive agenda in a style so dry and uninflected that it seemed to put Sens. Mitt Romney (R-Utah) and Ted Cruz (R-Texas) to sleep, Biden was proposing a new common sense, and he made a point of taking a shot at the old one.

“Trickle-down economics has never worked,” he said, jabbing at Ronald Reagan and Donald Trump’s tax cuts, “and it is time to grow the economy from the bottom and the middle out.”