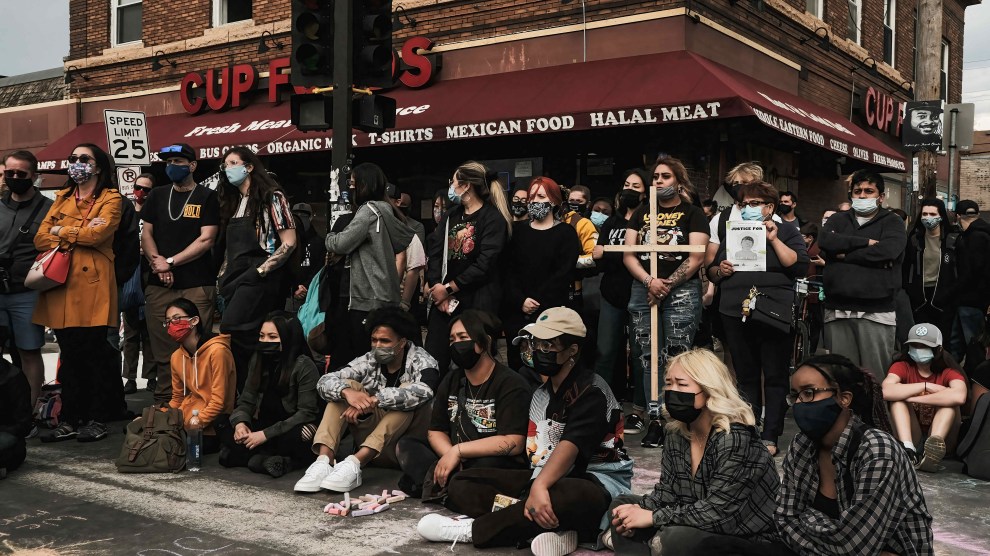 People gather on April 18, 2021 at the site of George Floyd's death.Matthew Hatcher/SOPA/Zuma

After hearing three weeks of testimony, the jury in Derek Chauvin’s murder trial has begun deliberating.

The prosecution and the defense concluded their closing arguments this afternoon. Prosecutor Steve Schleicher, referring to the infamous video of Chauvin kneeling on Floyd’s neck for more than nine minutes, urged the jury, “Use your common sense. Believe your eyes.”

He also attempted to refute the defense’s argument that Floyd possessed “superhuman” strength—a notion, as my colleague Nathalie Baptiste has reported, that dates back to slavery. This argument, Nathalie notes, seems to refute the defense’s suggestion that Floyd’s drug use significantly contributed to his death. “So which is it?” Nathalie writes. “Was Floyd a superhuman Black man incapable of feeling pain or was he one normal interaction away from death?”

Prosecutor describes George Floyd "losing strength—not superhuman strength…There's no such thing as a superhero. Those exist in comic books. And 38th and Chicago is a very real place."

"Just a man, lying on the pavement, being pressed upon, desperately crying out." pic.twitter.com/r44ImyIjSs

“This wasn’t policing,” Schleicher concluded. “This was murder.”

The defense, on the other hand, attempted to sow reasonable doubt among the jurors as to the cause of George Floyd’s death. Defense attorney Eric Nelson argued that Chauvin was a “reasonable officer” acting on his training during an event more complicated than what the video showed.

The jury could take hours, days, or weeks to come to a verdict. Minneapolis is already preparing for potential protests in the case of an acquittal. Not only are businesses boarding up, but Minneapolis public schools are switching from in-person to remote learning during the latter part of the week. But until the verdict is announced, there’s not much to do but wait.

In his rebuttal to Nelson's closing argument, Jerry Blackwell finishes by saying, "You were told…Mr. Floyd died because his heart was too big. Now having seen all the evidence…you know the truth. The reason George Floyd is dead is because Mr. Chauvin's heart was too small."